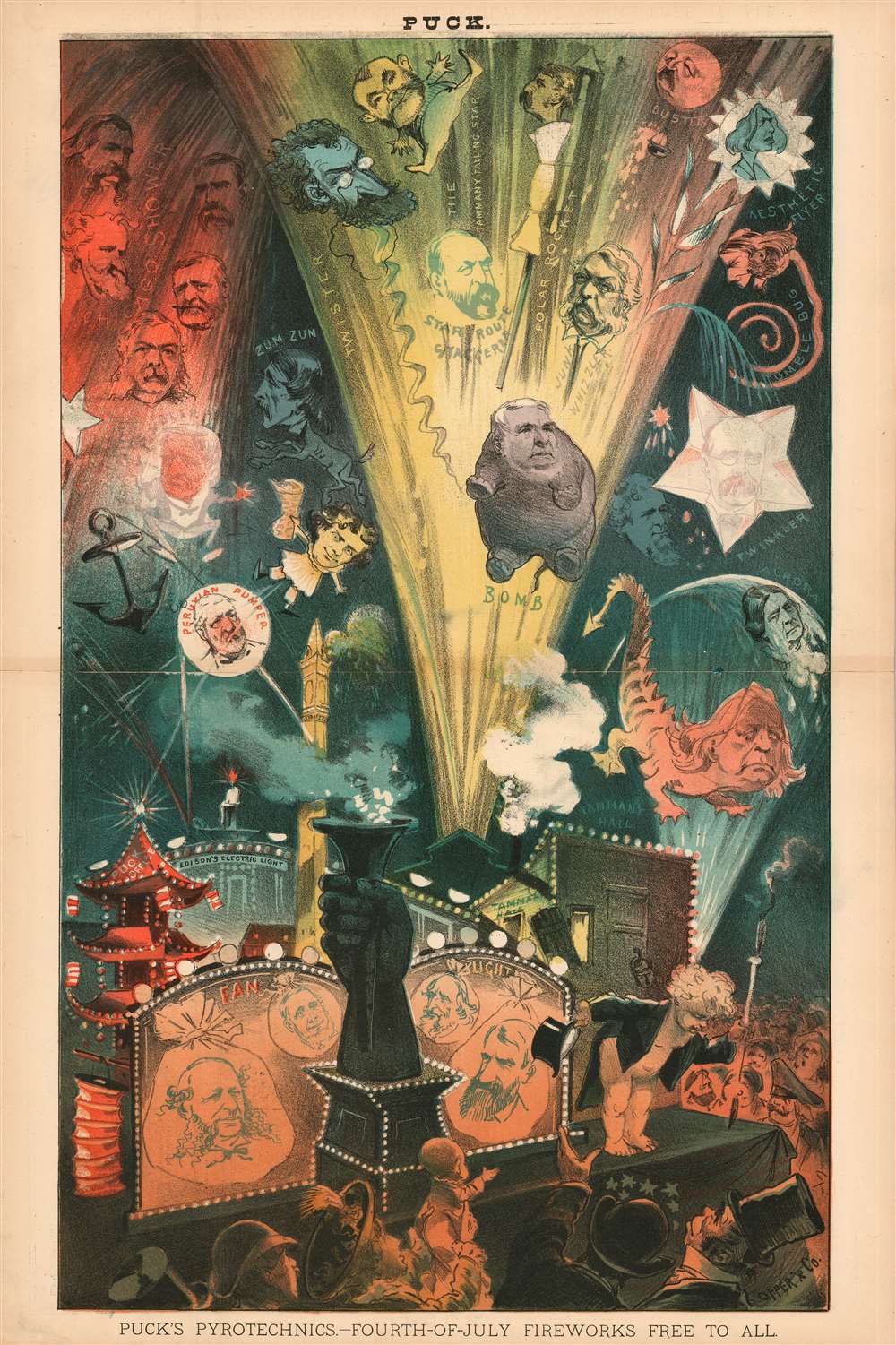 This spectacular and scarce Puck centerfold, drawn in 1882 by cartoonist Frederick Burr Opper (1857 - 1937). True to his best satirical form, Opper has packed this image with allusions to the year's events both in jest and in celebration. In the foreground from an electric-lit stage, the magazine's titular mascot (having set off the fireworks display, torch in hand) bows to a gaping and appreciative audience: one women offers up her baby for the pantsless Puck to kiss. Puck shares the stage with another torch-bearer: a statuesque hand with a guttering torch, alluding to end of the Madison Square tenure of the Statue of Liberty's arm. The stage is backed with a fanlight, decorated with the likenesses of William H. Vanderbilt, Russell Sage, Cyrus W. Field, and Jay Gould; these railroad barons and philanthropists were frequent butts for Puck's humor in general (and Opper's in particular) so it is equally possible that their position of 'honor' here alludes to their massive privilege, or an oblique 'thank you' from the magazine for providing so much of the year's material. Somewhat puzzlingly, all four likenesses appear on bags. Money bags?

Behind the stage and beneath the fireworks display is a fanciful skyline: The Puck building is portrayed as a festively-lit Chinese pagoda. Thomas Edison's new Pearl Street generating station is shown - with a gigantic candle set upon it. (The station had just been established in 1882, and would not actually go live until September of that year.) Tammany Hall (one of Opper's favorite targets) appears as well - with a prominent padlock on its unlit door.

Each of Puck's fireworks are named, and refer to recent scandals concerning the unnamed but well-known figures pictured within the blasts. Many of these revolve around the political machinations leading up to the 1880 Republican election of James Garfield, the fallout from his assassination, and widespread accusations of Republican corruption overall.

A fringe theory of the day was that the 1881 Chicago Fire had been started by a meteor shower: the shower of misfortune in this case being the fall in the 1880 Republican National Convention of the stalwarts (chiefly Ulysses S. Grant, Chester Arthur, Roscoe Conklin, John Logan, and James Donald Cameron, pictured here. The stalwarts, supporters of Grant, had been defeated by Garfield, Following his 1881 assassination of President Garfield, Charles Guiteau loudly declared himself a stalwart, thus obliquely implicating Garfield's former rivals.

Governor Samuel J. Tilden of New York, in 1880 the presumptive Democratic candidate in 1880 presidential election - though he would fall from from favor, being beaten by Hancock - who would be in turn defeated by Garfield.

a.k.a.. Garfield's Secretary of State, James Gillespie Blaine, accused of having ulterior financial motives in his support of Peru during his diplomatic efforts during the War of the Pacific.

A sex scandal! The Abolitionist Henry Ward Beecher is depicted as a great dragon - an allusion to his doomed fight against the Chinese Exclusion Act, which passed that year. He is overshadowed by 'Aurora', the suffragist Elizabeth Richards Tilton, whose adulterous relationship with Beecher twelve years prior still dogged the politician.

The flamboyant James Gordon Bennett is pictured, strapped to a 'Polar Rocket' - an allusion to his financial backing of the ill-starred 1879–1881 Jeannette expedition to the Arctic, whose tragic denouement had just unfolded.

at top center witness 'Honest' John Kelly, a boss of Tammany Hall who had just lost his position as city comptroller and was two years from retirement. (Opper never passed up an opportunity to swipe at Tammany Hall.)

George Robeson, a Republican Representative for New Jersey who had been in Puck's sights for his allocation of a massive surplus to the Navy.

More corruption: Carl Schurz, who had been a controversial leader of the notoriously corrupt Indian Affairs Office, but whose appearance here may be due to his 1881-1883 management of the New York Evening Post.

Drawn by Frederick Burr Opper for Puck Magazine. OCLC shows only one example of this held separately in the Library of Congress. We see no other examples in dealers' catalogues or auction records.

Frederick Burr Opper (January 2, 1857 – August 28, 1937) was an American artist and pioneer of the American newspaper comic strip, best known for his successful Happy Hooligan. His oeuvre encompassed humorous magazine cartoons, covers, political cartoons and comic strips spanning sixty years. The eldest of three children born to Austrian-American immigrants Lewis and Aurelia Burr Oppers in Madison, Ohio, he dropped out of school at fourteen to work as a printer's apprentice at the local Madison Gazette. Two years later he moved to New York City where he worked day jobs while continuing to draw. He studied briefly at Cooper Union, and worked briefly under illustrator Frank Beard. Opper's first cartoon was published in Wild Oats in 1876, after which he received regular work from Scribner’s Monthly and St. Nicholas Magazine. He worked steadily for Leslie's Weekly (1877 to 1880) but found a home employer with Puck Magazine for 18 years, drawing spot illustrations, color centerfold spreads, and covers. With Puck, Opper blossomed as a satirist, skewering newspaper moguls, politicians, and industrialists while championing 'Mr. Common Man.' His work spread to newspapers around the country, and in numerous books. A professional cartoonist, he painted as a hobby. Learn More...

Puck, v. 11, no. 278, (New York: Keppler Schwarzmann), Jully 5, 1882.     Puck (1871 - 1918) was the first successful humor magazine in the United States and featured colorful cartoons, caricatures, and political satire. Founded by Joseph Keppler in St. Louis, Puck began publishing both an English and a German language edition in March 1871. The German edition moved to New York City five years later and published its first issue there on September 27, 1876, and the English edition soon followed and began publishing from New York on March 14, 1877. 'Puckish' means 'childishly mischievous'm which led to Shakespeare's Puck (from A Midsummer Night's Dream) to be recreated as the mascot of the magazine and for his name to become its title. Each issue featured a full-color political cartoon on the front cover, a full-color non-political cartoon on the back cover, and a two-page centerfold that usually addressed a political topic as well. In 1893, Keppler moved the magazine to Chicago and published smaller editions of Puck from the Chicago World's Fair. Keppler died in 1893, and Henry Cutler Bunner, who had been editor since 1877, took over. Bunner operated the magazine until he passed away in 1896, which left Harry Leon Wilson in charge until his resignation in 1902. The German edition was published until 1897. Joseph Keppler, Jr. then became editor. William Randolph Hearst bought the magazine in 1916 and operated it for another two years until the final issue was distributed on September 5, 1918.