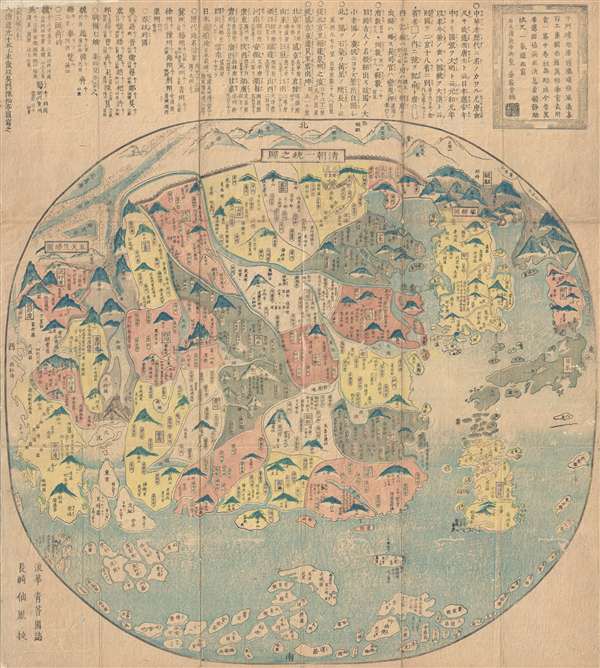 Ostensibly a天保 Tenpō 6 map of China under the Qing Dynasty, this map in fact covers from India to Japan, inclusive of all of China and Korea, reflecting a pan-Buddhist perspective. The Great Wall is evident at the top of the map and in fact forms part of the title. The Gobi Desert is also identifiable at the top left. Hainan is at bottom center. Taiwan or Formosa does not appear obviously present, but the large landmass roughly located in the same area represents the Ryukyu Kingdom, specifically Okinawa. Its outsized proportion reflects the importance of the semi-independent Kingdom to Chinese-Japanese trade, the direct execution of which was, at that time, forbidden by the Tokugawa Shogunate. Along the bottom of the map of the map a series of small islands represent the East Indian archipelago, but the names are in fact drawn various other parts of the world.

The Qing Empire, at this time, was undergoing a prolonged period of weakened borders and exposure to foreign influence. In 1835, as this map was issued, the Daoguang Emperor has just suppressed Jahangir's Holy War against the Qing on the Turkestan Frontier. Allied with the merchant princes of Kokand, the Daoguang Emperor was able to suppress the rebellion, but in doing so granted extensive political and trade concessions to Kokand, which some consider to have been the first of the 'Unequal Treaties.' This map, and its extensive coverage, may have been intended to present a unified image of the Qing China in the face of fracturing frontiers.

This map is attributed to Seitaien Shi and Chinshōtei Zusha. It appears to have been published simultaneously with few if any differences, in both China and Japan, although no definite publication records have survived. We have identified examples in the collections of U.C. Berkeley and the University of Vancouver.

Good. Wear on original fold lines. Some toning and wormholing. Note we have scanned the map on top of matching paper to minimalize the appearance of the wormholes. These can easily be patched, we will leave this restoration decision up to the buyer. Please study image.