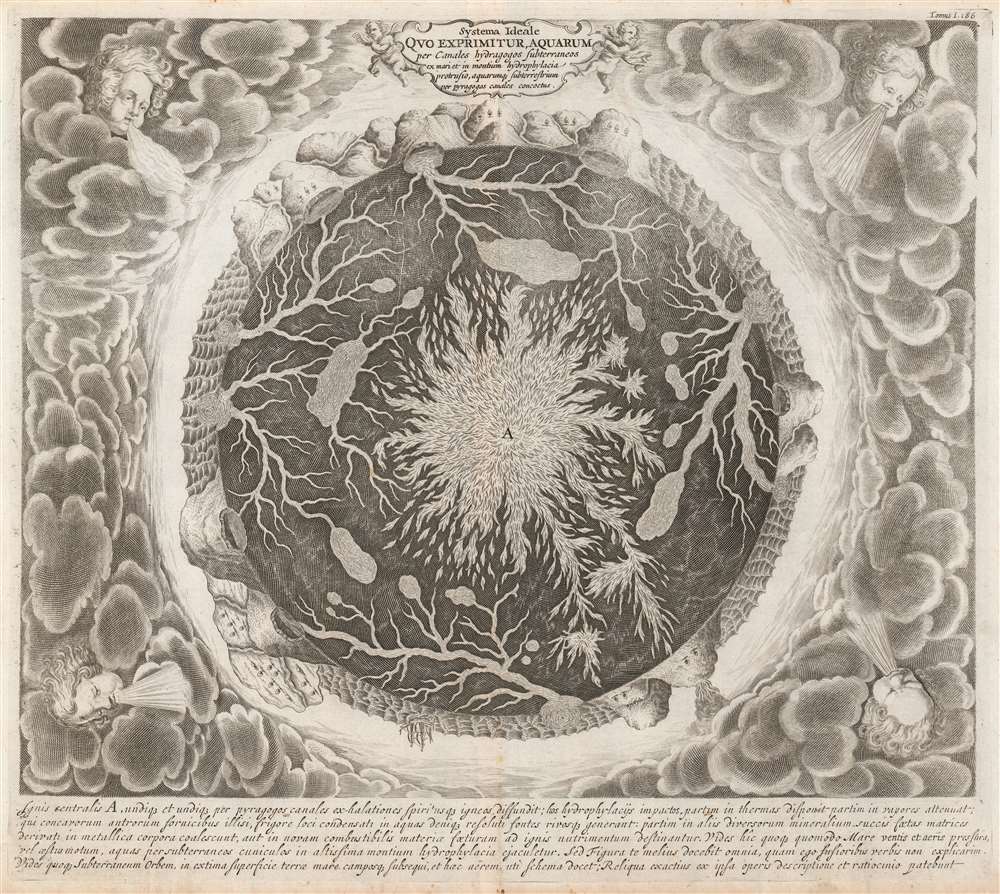 The most complete illustration of Kircher's revolutionary hydro-geographic theories.
$2,500.00

This is one of the 17th century polymath Athanasius Kircher's most iconic and graphically intense maps. Situated amidst dense clouds with Aeolus, or wind heads, at the corners, the Earth appears as a gigantic fiery orb. Around the perimeter, we can recognize the oceans, mountains, land, whirlpools, and even a few sailing ships. The center of the Earth is a great fire. Beyond the flaming core, artery-like networks of subterranean seas and rivers connect great reservoirs hidden under mighty mountains.

Inspired by two weeks of earthquakes in Calabria in 1638, and the volcanic eruption of Vesuvius in 1637, Kircher postulated subterranean seas that created currents, earthquakes, and tides by entering and exiting through an extensive network of tunnels and abysses. This map, more than any other, fully illustrates these theories.

On the 21st April in the year 1618, being there with the King and his army, I ascended the place and observed everything with great attention: I discovered first two round fountain each bout four palms in diameter, and saw with the greatest delight what neither Cyrus, the King of the Persians, or Cambysis, nor Alexander the Great, nor the famous Julius Caesar could ever discover. The two openings of these fountains have no issue in the plain on top of the mountain but flow from the root of it. The second fountain lies about a stone-cast west from the first: the inhabitants say that this whole mountain is full of water and add that the whole plain about the fountain is floating and unsteady, a certain mark that there is water concealed under it.

Kircher's ideas may seem quaint to us today, but he was an excellent observer and a great reasoner. His work with currents in particular is revolutionary and among the first serious scientific studies of this phenomenon. He was also correct in surmising the superheated nature of the Earth's core. While his network of underground lakes and rivers connecting to giant reservoirs under mountain rangers was incorrect, his theory did correctly recognize that Earthquakes were caused by the movement of great plates of Earth. And, while his assessment regarding the source of the ocean currents was incorrect, his identification of current patters was often accurate.