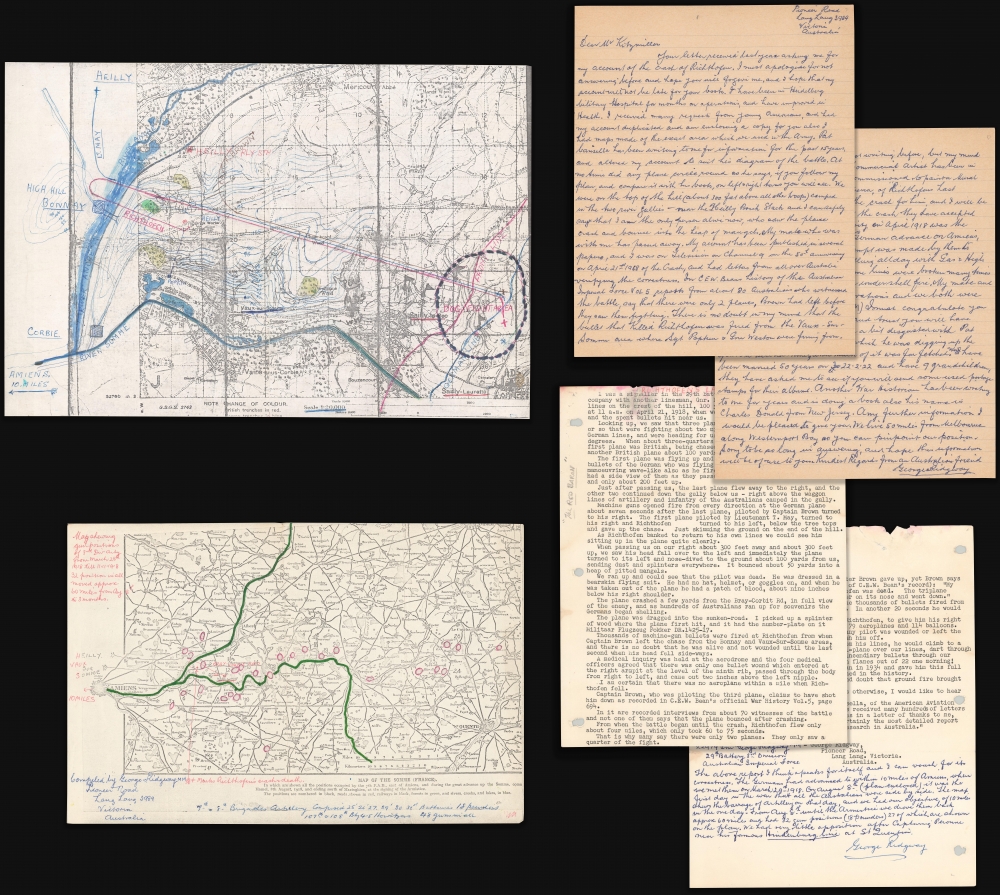 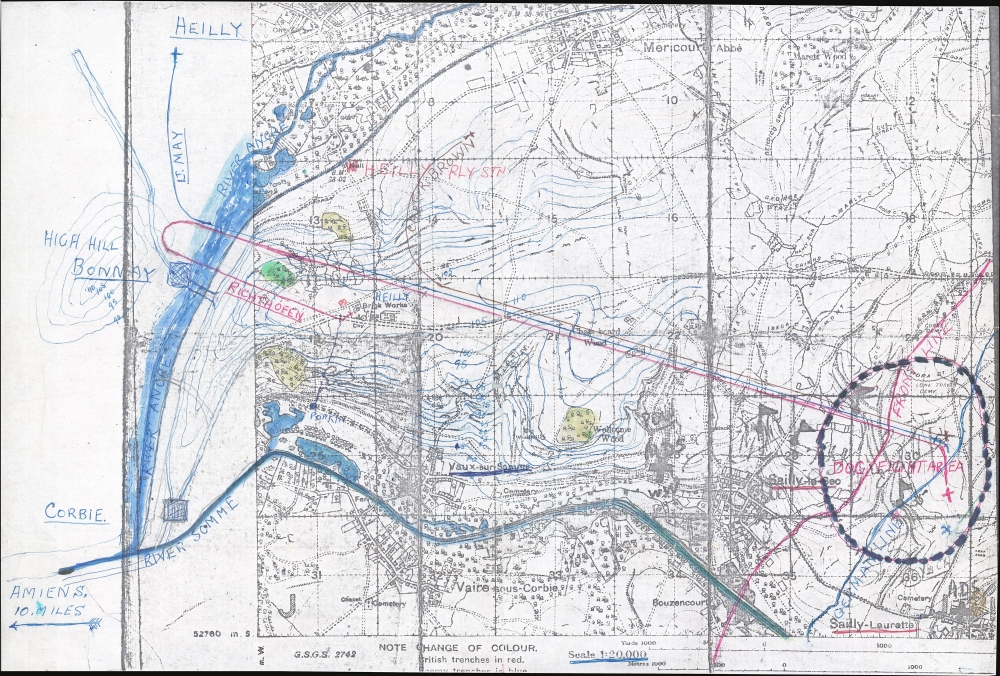 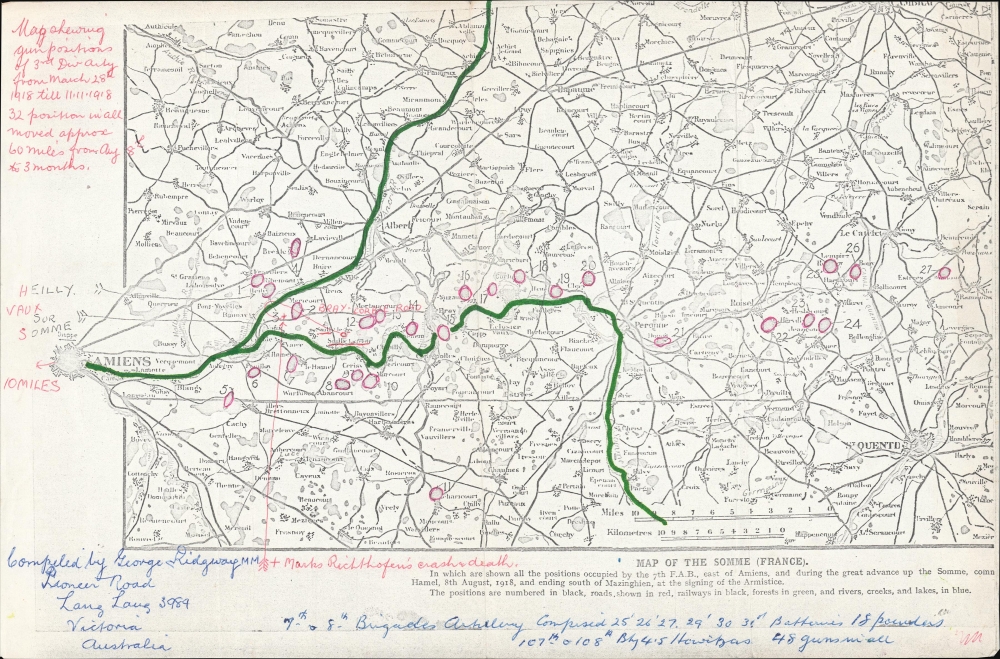 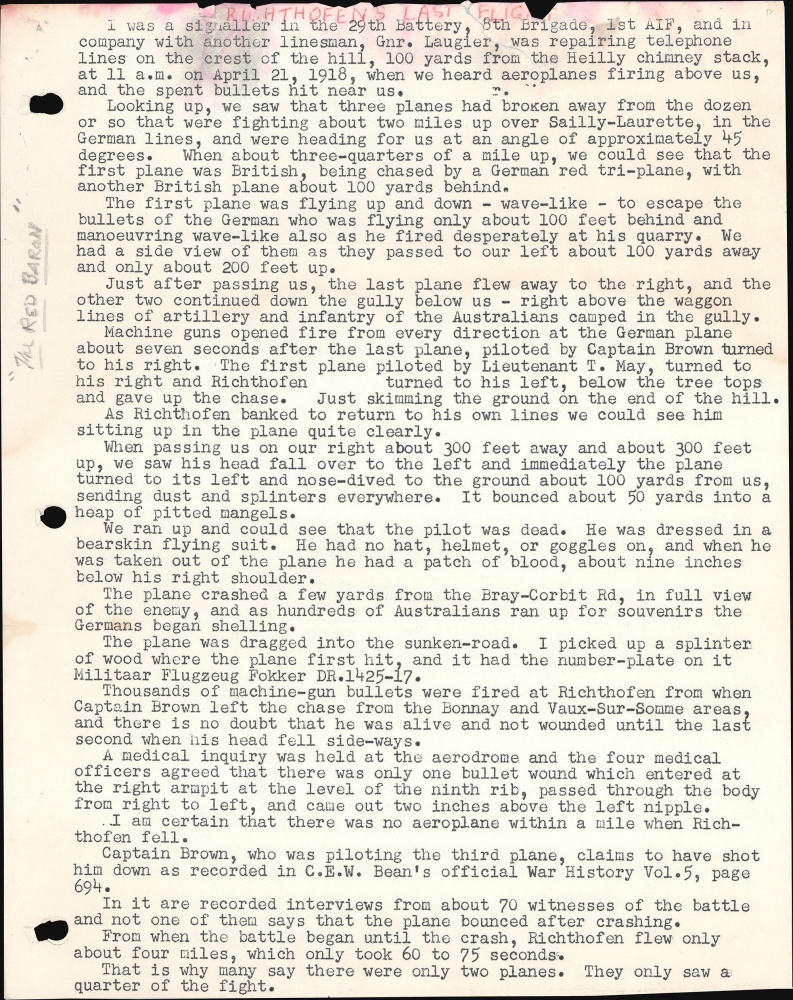 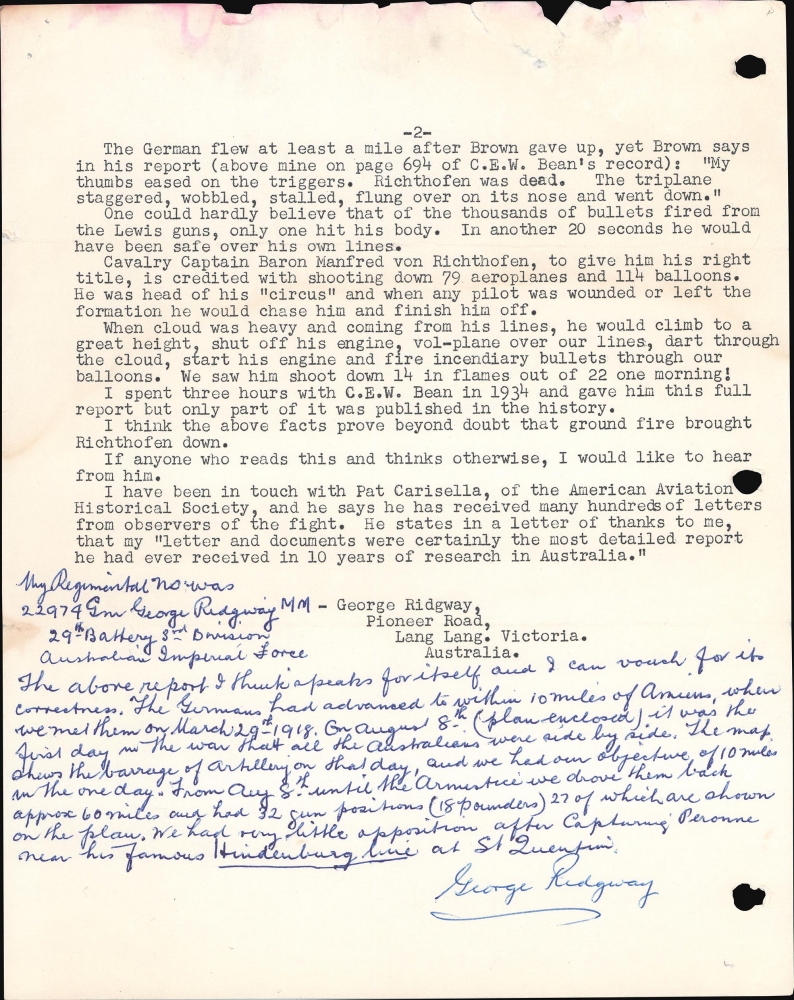 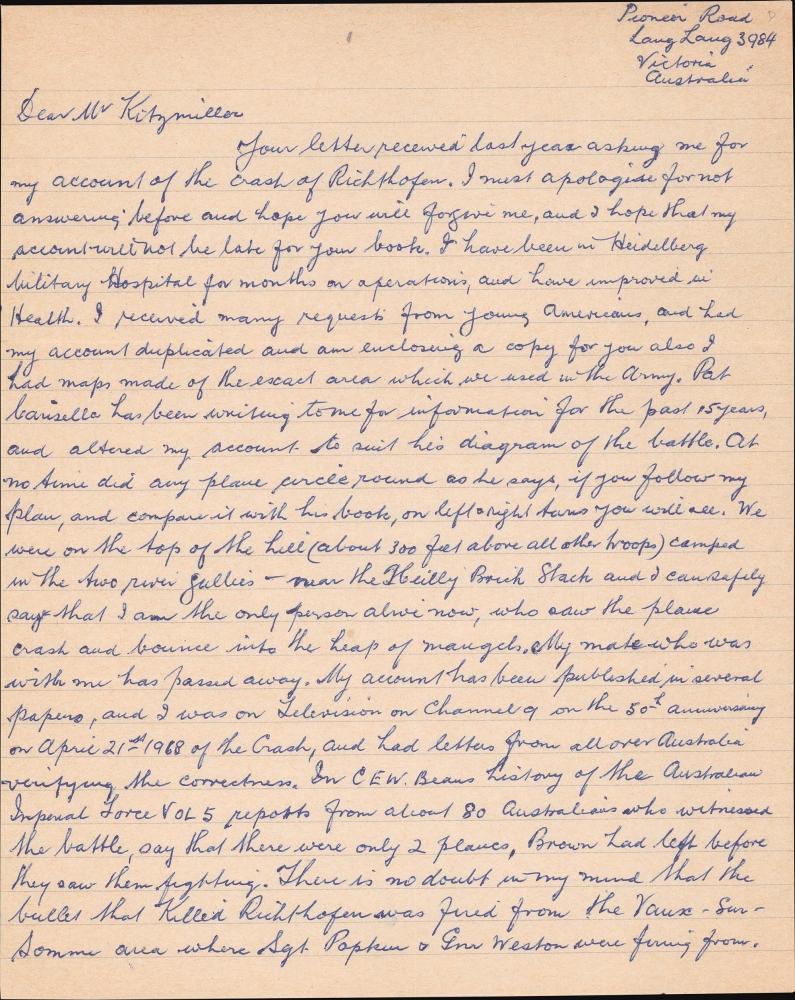 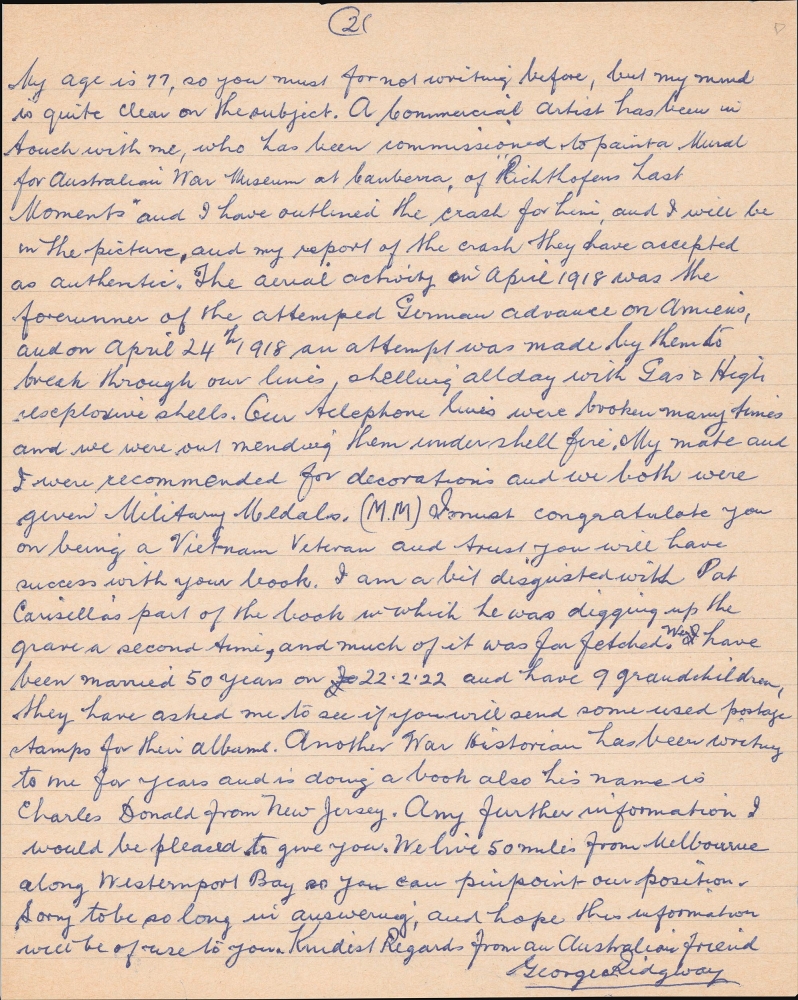 Controversial eyewitness to the final moments of The Red Baron.
$4,000.00

This is a c. 1970 archive by Gunner George Ridgway detailing his eyewitness account of the World War I (1914 - 1918) downing of the 'Red Baron' Manfred von Richthofen (1892 - 1918), the 'ace-of-aces' and perhaps the world's most famous fighter pilot. The archive consists of two hand-annotated maps, a typewritten copy of Ridgway's account, and a handwritten letter addressed to 'Mr. Kitzmiller'. All six documents support Ridgway's controversial version of the Red Baron's final moments in which he argues that Richthofen was shot down from a gunnery position on the ground. This is contrary to the official assessment of the battle, which stated that the Red Baron was shot down in aerial combat by Canadian RAF gunner Arthur 'Roy' Brown (1893 - 1944). While even at the time, investigations into the Red Baron's death likely indicated he was shot down from the land, the cathartic value of a RAF pilot outgunning the Bloody Red Baron', who by this time had downed some 80 Allied planes, was invaluable.

The first map, depicting the Somme region near the confluence of the River Somme and the River Anore, summarizes Ridgway's account of Richthofen's final flight. Manuscript notations trace the aerial combat between Richthofen and two British Sopwith Camels, piloted by Canadian Captain Arthur 'Roy' Brown (1893 - 1944) and Canadian Lieutenant Wilfrid 'Wop' May (1896 - 1952). Three parallel lines cross the page from the highlighted 'Dog Fight Area'. The brown line on the top appropriately follows Brown's flight and illustrates Ridgway's contention that Brown veered off before the fatal shot found its mark killing Richthofen. The blue line, in the middle, traces the path of Lieutenant May's flight and illustrates him also veering off in the same direction as May. Appropriately, the red line follows Richthofen as he turns the opposite direction of the two Canadian pilots and heads back toward German lines (marked by a blue line in the map's lower right) before being fatally shot and crash landing. The crash site is not far from the brickworks where Ridgway witnessed the dogfight.

Given what he witnessed, and how Richthofen turned towards German lines without any Allied aircraft engaged near him, Ridgway contends that ground fire, likely from a machine gun, killed Richthofen. In the typewritten account included with this archive, Ridgway states,

As Richthofen banked to return to his own lines we could see him sitting up in the plane quite clearly. When passing us on our right about 300 feet away and about 300 feet up, we saw his head fall over to the left and immediately the plane turned to its left and nose-dived to the ground about 100 yards from us, sending dust and splinters everywhere. It bounced about 50 yards into a heap of pitted mangels.'

Ridgway's account suggests, against the official version, that the fatal blow came after Richthofen and the two Allied pilots had disengaged. The second map, which depicts the region much more broadly, marks local machine gun positions. One of them is not far from the Red Baron's crash site.

Baron Manfred von Richthofen was a German fighter pilot during World War I. Considered the 'ace-of-aces', he is likely the most famous fighter pilot of all time. Over the course of World War I, Richthofen in his iconic red tri-wing, was officially credited with 80 air combat victories. He transferred to the air force from the cavalry in 1915 and quickly distinguished himself as a fighter pilot. In 1917, Richthofen took command of Jasta 11, a fighter squadron filled with Germany's best pilots, many of whom he trained himself. By June, he was put in command of a fighter wing, known as 'The Flying Circus' due to its brightly colored aircraft and mobility. Richthofen died in combat shortly after 11:00 a.m. on April 21, 1918 near Vaux-sur-Somme in France.

'I Killed The Red Baron!'

Despite being witnessed by scores of people, a 'definitive' account of the final moments of The Red Baron's unparalleled success in aerial combat does not exist and the complete truth will never be known. The Royal Air Force officially credited Roy Brown with shooting down The Red Baron. That version of the story has proven tenuous at best, particularly given the upward angle of the single bullet wound in Richthofen's chest - a feat that would have been near impossible from an approximately equal height. Another version of events appeared in 1925, when a New York City based magazine published the headline 'Richthofen was Murdered'. Rumors in Germany had led many to believe that Canadian troops shot Richthofen shortly after a safe crash landing. Numerous eyewitness accounts of the first ground troops to reach the crash site, of whom Ridgway was one, directly contradict this version. Other theories suggest Richthofen was killed by air-to-air fire, but, again, given the angle of the bullet wound, both versions are implausible. Two competing theories about ground-to-air fire are the most plausible, one of which follows Ridgway's argument. The first posits that an unknown rifleman, firing at Richthofen as he flew over, struck the fatal blow. The more likely version is that Richthofen was killed by a machine gun emplacement. Many believe that it was Cedric Bassett Popkin (1890 - 1968), but even he was unsure. In an interview given in 1964, Popkin stated, 'I am fairly certain it was my fire which caused the Baron to crash but it would be impossible to say definitely that I was responsible…As to pinpointing without doubt the man who fired the fatal shot, the controversy will never actually be resolved'.

This is a unique archive compiled by George Ridgway and sent to 'Mr. Kitzmiller' c. 1970. This is one the very few original accounts offering eyewitness evidence of the Red Baron's downing. Another account, but a different witness, was auctioned at Bonham's in 2015.

George Ridgway (1895 - November 18, 1976) was an Australian Army veteran who served during World War I. History remembers Ridgway for one reason: he was an eyewitness to the shooting down and death of Cavalry Captain Baron Manfred von Richthofen, better known as the Red Baron. Ridgway's account of the aerial battle differs from the official accounts accepted during the war, because he states that von Richthofen died not by air-to-air combat, rather by ground-to-air gunfire. Learn More...