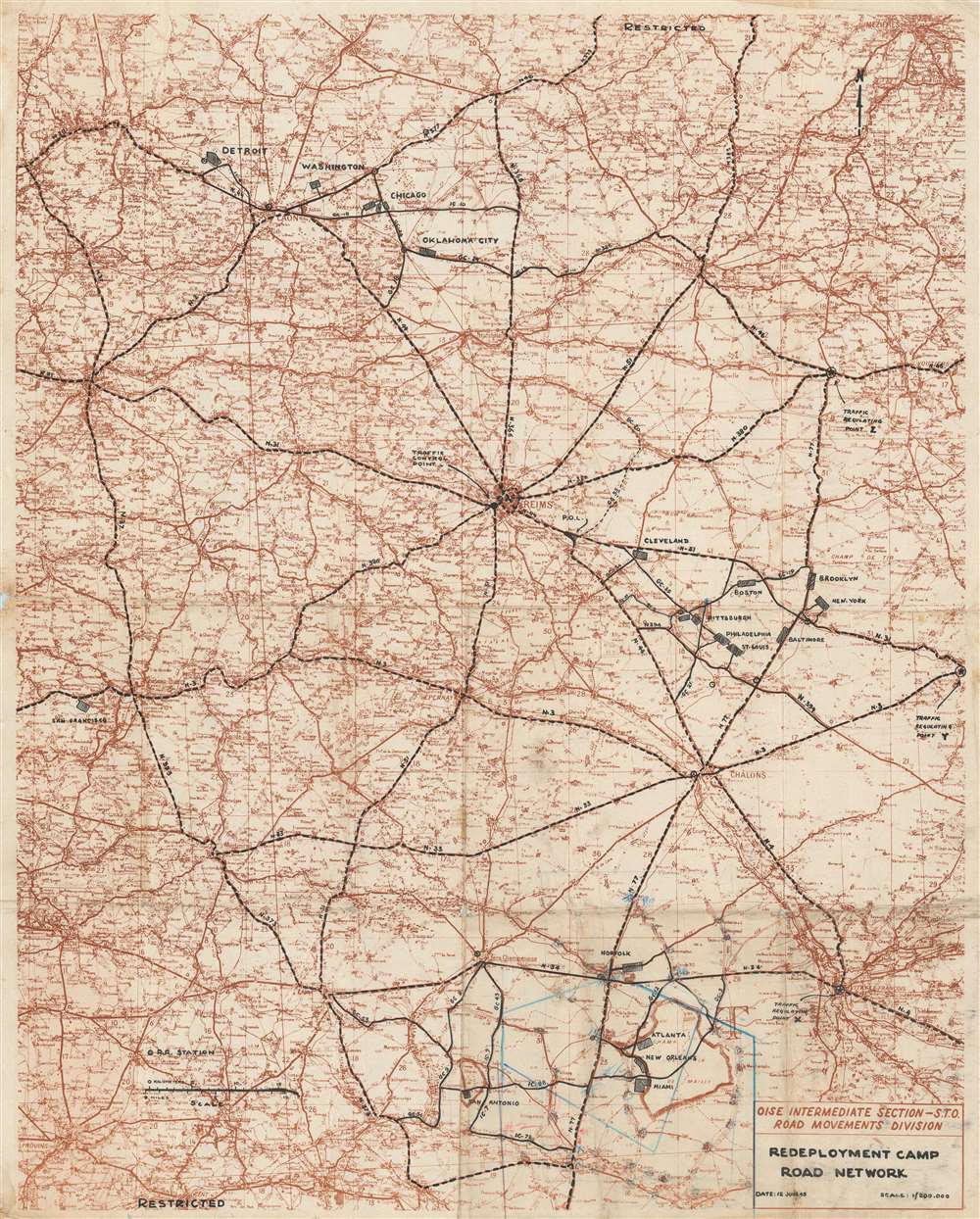 A remarkable 1945 record of a little-known chapter in World War II history. This map details the network of 'city' redeployment camps established in Europe after Germany's surrender, ending of World War II in Europe. The Road Movements Division map of Reims, France, and its environs, tells part of the story of how millions of American soldiers got back home after the war. These 'city camps,' named for American cities, including Detroit, Norfolk, Oklahoma City, Cleveland, Pittsburgh, St. Louis, and Boston, appear as black boxes scattered across the map. Dashed black lines, representing roads, connect the camps, and the major French towns. Traffic control points and traffic regulating points are also labeled, which makes sense given that thousands of trucks would have been traveling these roads in the summer of 1945. Intriguing manuscript notations in blue pencil appear along the bottom border and surround the Atlanta, New Orleans, and Miami redeployment camps. Unfortunately, we have been unable to decipher the meaning of these markings.

A series of redeployment camps sprang up almost immediately after the German surrender ended World War II in Europe. Since the war in the Pacific was still raging, American commanders knew it was essential to get as many men and materiel from Europe to the Pacific as quickly as possible. Within the first twelve months, Allied Command hoped to move over three million soldiers out of Europe, either directly to the Pacific or through the United States and then on to the Pacific. Detailed planning occurred even before the D-Day invasion of Normandy on June 6, 1944. Two systems of redeployment camps were organized. One, known as the 'city camps,' was organized under the Assembly Area Command around Reims, France, and were named after American cities, as can be seen from the current map. The second set of camps were named after popular cigarette brands, 'Camp Lucky Strike' for example, and were much closer to the actual ports of debarkation, where men and supplies would leave for either the United States or the Pacific. 'High point' soldiers, those who had seen a lot of combat, were given a chance to be discharged and return home. These men were removed from their units and reorganized into new units that were set to be disbanded. They were replaced with lower point soldiers, those who had not been in Europe for very long or who had not seen much combat, and who would be sent to the Pacific for the upcoming invasion of Japan. Hundreds of thousands, if not millions, of soldiers, were waiting in these camps for their next assignment when the Japanese surrender ended World War II. For these men, this meant that their ordeal was over and that they could look forward to going home, instead of going to fight what would have been the biggest, and likely bloodiest, battle of the war.

Why Haven't I Heard About Redeployment Camps?

Minimal scholarship has been produced concerning these 'city camps.' Likely due to the celebration and commemoration surrounding the end of the war, the importance of these camps faded away after Operation Downfall, the planned invasion of Japan itself, became nothing more than a footnote of history. The critical role they would have played in providing the men and machinery needed to launch what would have been the biggest amphibious invasion in human history disappeared, and they became a mechanism for millions of soldiers to return home in a (mostly) organized way.

This map was printed on a French road map, dated June 12, 1945, and created for the Road Movements Division of the Oise Intermediate Section. One example is cataloged in OCLC and is part of the collection at the New York Public Library.