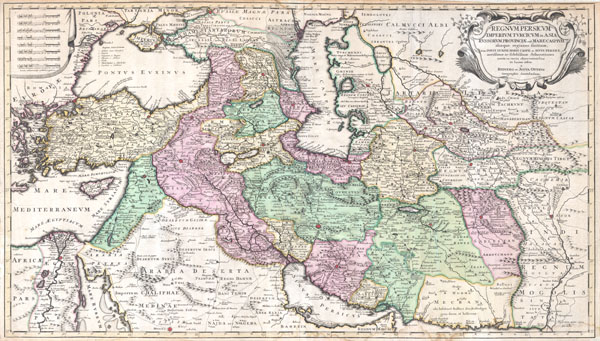 A scarce and altogether spectacular c. 1730 map of southwestern Asia, specifically focusing on Persia, by Reiner and Joshua Ottens. Covers from Egypt and Greece eastward to include Turkey, the northern part of the Arabian Peninsula, the Black and Caspian Seas, Persia, and Tartary, Afghanistan and Pakistan, including the Indus valley and the western extant of the Mogul Empire. Extends as far north as Asof (Asov) and 'Tibet,' and as far south as Medina. Includes superb detail regarding the early 18th century Silk Route trading routes through Persia and Central Asia, noting the important centers of Samarkand, Bukhara and Tashkent. Generally accurate with only a few notable flaws. Most specifically the positioning of Lake Van and Lake Chahi in close proximity to one another. These lakes are in fact separated by over 160 kilometers. Identifies the Pyramids of Egypt, the ruins of Troy, Mt. Sinai, and Mt. Agerdaghi (Mt. Ararat, but labeled Mt. Noah). Upper right quadrant features an attractive title cartouche with baroque ornamentation. Upper left quadrant has eight distance scales on a curtain.

Joachim Ottens (1663 - 1719) and his sons Renier (? - 1750) and Joshua (? - 1765) Ottens were prominent Dutch booksellers and map publishers from about 1680 to 1790. Joachim, the founder of the firm, was initially employed as a copperplate engraver by Frederick de Wit. In 1711 Joachim founded his own firm. Though Joachim died only a few years later, his sons Renier and Joshua took over the firm and presided over its most prolific period. The Ottens family's most notable contribution to cartography were its enormous made-to-order multi-volume atlases such as the Atlas Major. Some examples of the Atlas are compiled from over 800 separately issued maps. Learn More...

Very good condition. Top Margin narrow on right side, but intact all around. Very minor water stain most confined to margin, but extening about 1/2 inch into the map in one or two place. Overall very nice condition with original color.