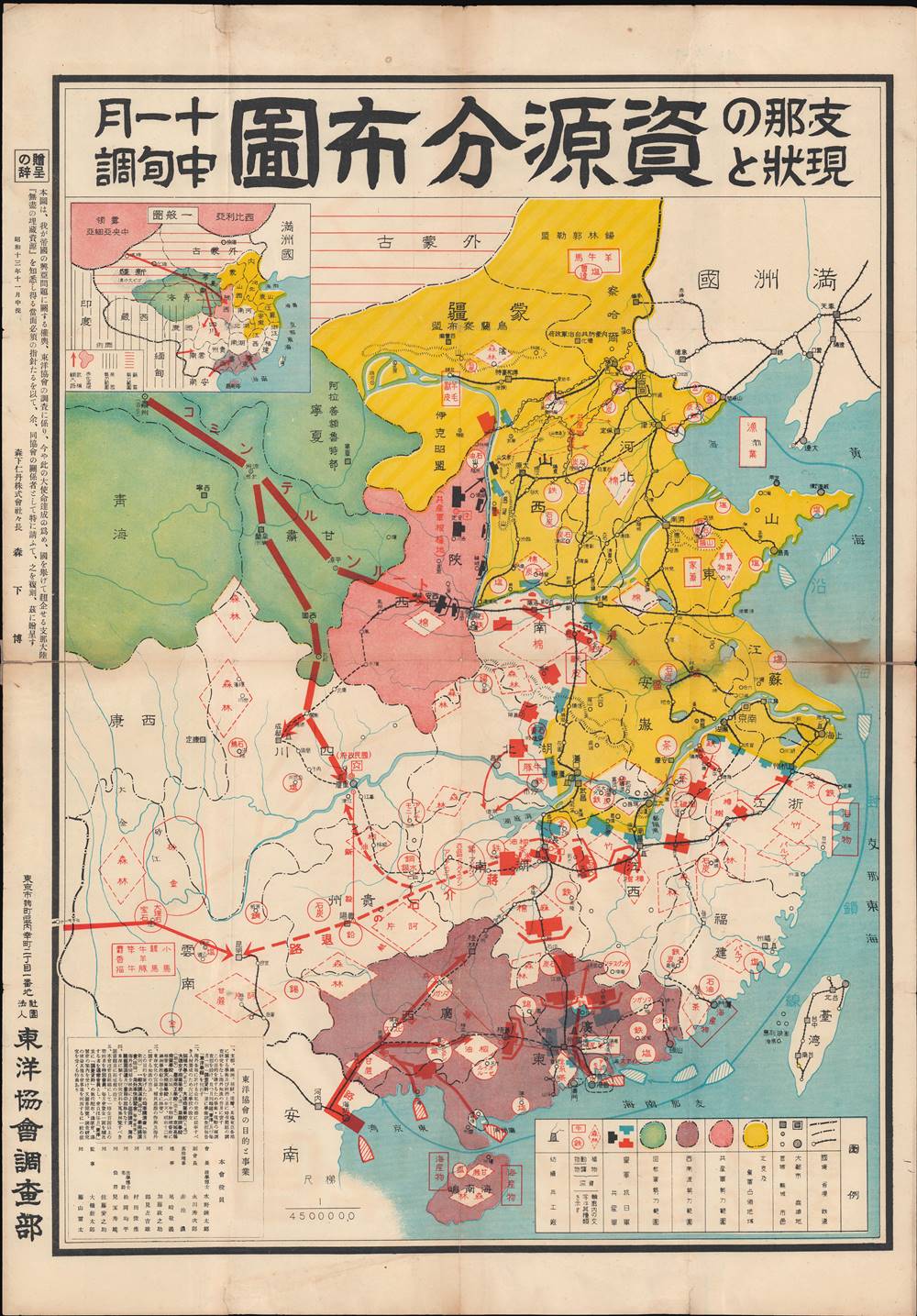 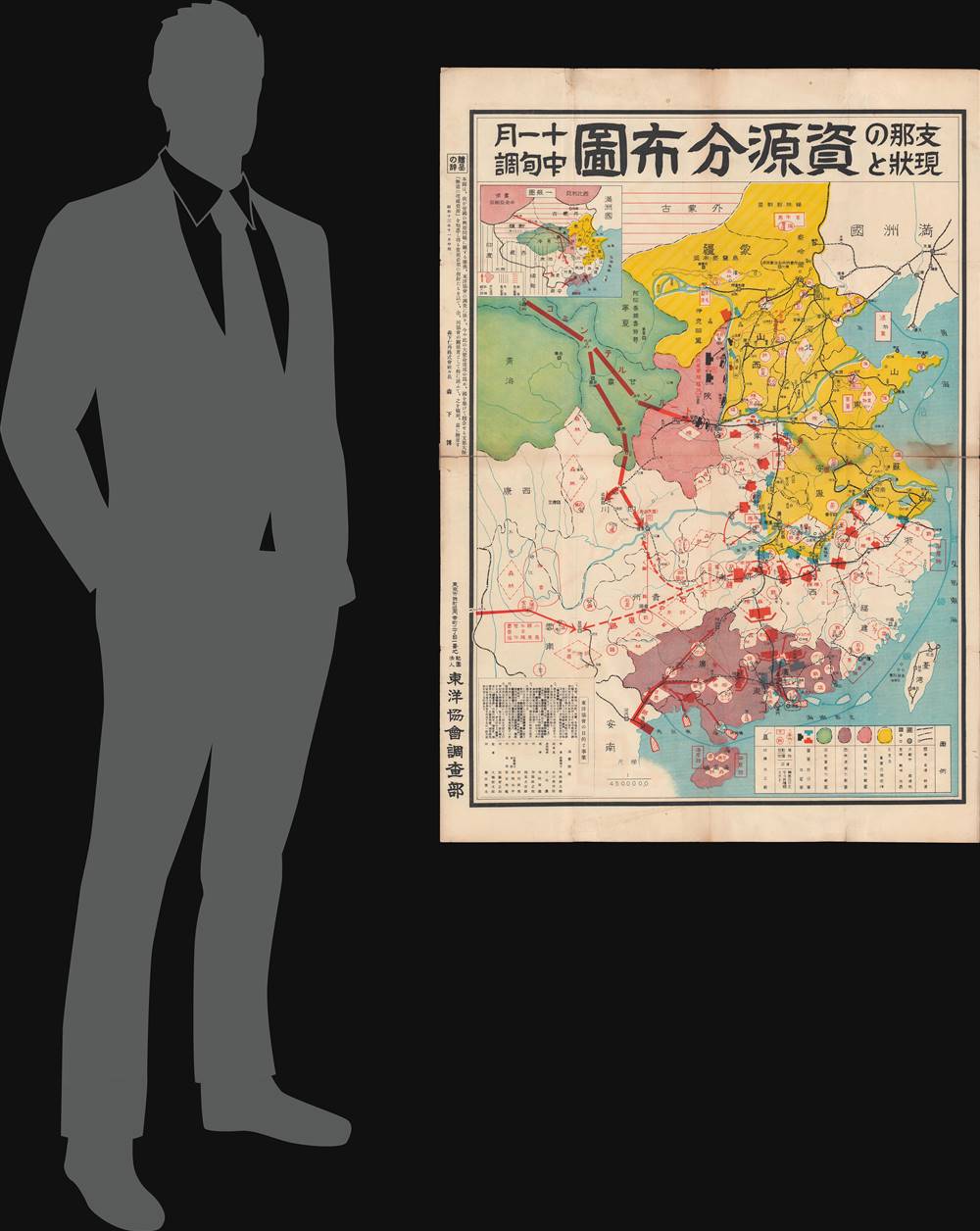 This is a rare 1938 map of the natural resources and wartime situation in China, published by Tōyō Kyōkai, a nationalistic organization of political and business leaders in Japan. It reflects Japan's main war aims and strategy, to control China's resources and prevent their use by Chiang Kai-Shek's Nationalist (Guomindang) forces.

A Blueprint for Conquest

This map serves two main functions; to show the current state of the war in China and to highlight the prevalence and distribution of various natural resources. The thick red line shows a supply route, labeled the 'Comintern Route,' running from the Soviet Union to the Chinese government's headquarters at Chongqing and the Chinese Communists based at Yan'an, Shaanxi Province. The red dotted lines show the retreat of Chiang's forces to Chongqing and Kunming in the preceding months. The location of various important resources like forests (森林), cotton (棉), iron (鉄), and coal (石炭), as well as arsenals and factories for war materiel, are noted.

Some prefatory remarks on the map (贈呈の辞) are written in the top-left margin by Morishita Hiroshi (森下博), the president of Morishita Jintan Co. (森下仁丹株式會社), a company specializing in pharmaceuticals, medical supplies, and cosmetics (still in existence today). Morishita thanks Tōyō Kyōkai for their work, which helps to spread knowledge about the endless untapped resources of China. Due to its relationship with the military and need for raw resources, many of which were rare and only found in one or two locations, it is unsurprising that the pharmaceutical industry would be so vocal in its support of Japanese expansion throughout East Asia.

The legend includes symbols for political borders, rail lines, and cities, as well as a guide to the color shading on the map: yellow is Japanese-occupied areas, red is the Communist base area in and around Yan'an, purple is the 'Southwest faction' (warlords only partially under Chiang's authority, such as Li Zongren, Bai Chongxi, and Long Yun), and green is the Hui Ma family warlords. Blue pillboxes represent the positions of Japanese troops, red pillboxes denote anti-Japanese units (that is, Chiang's armies), and black pillboxes signify the Chinese Communists.

At top-left is an inset map (一般圖) showing supply routes to Chongqing via Southeast and Central Asia, including by sea through ports in southern China and Tonkin. The area shaded with horizontal red lines shows the extent of Soviet and Mongolian People's Republic forces and the vertical black lines represent the limit of British power (greatly overstating the case).

In order to fulfill its ambitions to supremacy in East Asia, Japan needed land for its own large population to settle and resources to power the empire, especially as relations with the West worsened and Japan moved towards autarky under the rubric of the Greater East Asia Co-Prosperity Sphere. Imperial Japan never publicly espoused a philosophy equivalent to the Nazis' lebensraum, and its basic framework for approaching other Asian peoples was a combination of nationalism and Confucianism, but racialist thinking became more common as Japan's empire expanded from the Meiji period onwards, especially after the start of the war in China in 1937. As here, there was no inhibition on open or thinly veiled discussion of seizing China's resources to benefit Japan's population.

When this map was made, Japanese troops had recently captured Wuhan and were in the process of capturing Guangzhou (Canton). These victories capped over a year of nearly uninterrupted gains. However, Japan's hope of quickly forcing Chiang Kai-shek to surrender had not succeeded, as Chiang retreated far into the Chinese interior to Chongqing (重慶) and rallied the nation for a long and grinding conflict.

As can be seen here, Chiang's major problem was getting supplies, and consequently Japanese strategy focused on cutting off said supplies, firstly by occupying coastal ports and secondly by seizing or bombing overland routes. Chinese ports could be taken, but foreign-held ports (Hong Kong, Macao, Guangzhouwan, Haiphong) continued to act as a conduit for Chiang's forces and posed a constant headache for the Japanese. Eventually, attempts to cut off Chiang's supplies would lead Japan to occupy Tonkin, and then all of French Indochina, souring relations with the Western powers and setting the stage for the Pearl Harbor attack.

The second step was similarly tricky for logistical and geopolitical reasons. Although Japanese propaganda constantly played up Soviet support for Chiang and the threat of Communism in China, relations between China and the Soviet Union were deeply complex, with territorial disputes in Xinjiang and Mongolia and the intricate triangular relationship between Moscow, Yan'an, and Chongqing. Japan and the Soviet Union were locked in a tense standoff in Manchuria and Mongolia, but despite the efforts of some hotheaded officers in the Japanese Army to provoke a war, neither side was prepared for a full-scale conflict there, and the Soviet victory the following year at Khalkhyn Gol led to a ceasefire and eventually a Neutrality Pact between the two countries.

One method the Japanese adopted to cut off Chiang's supplies from Central Asia was to win over Muslims, both Chinese (Hui) and non-Chinese speaking, in northwestern China. Despite considerable effort in this regard, including the construction of a mosque in Tokyo in 1938, this courtship was mostly unsuccessful, largely because northwestern China was under the rule of warlords who were more naturally aligned with Chongqing or Moscow. Most important among these were the 'Ma family warlords' (Ma being a common surname among Chinese Muslims, likely originating with the transliteration of the Prophet's name). These forces, represented in green and labeled 'Muslim Army' (回教軍), were seasoned cavalry troops fighting on home turf, giving them a distinct advantage over their adversaries.

This map is dated to the middle of November 1938 (Showa 13). It was published by the Investigation Department (調查部 Chōsabu) of Tōyō Kyōkai (東洋協會), a group composed of leading Japanese statesmen and business figures interested in East Asian affairs. It is held in the Asian Maps Collection at Duke University but otherwise has no known institutional holdings and is very scarce to the market. Tōyō Kyōkai published a similar map in 1941 (titled 支那抗日戰區及資源交通網要圖), which appears to have been partially based on this map; it is held by Harvard University and the Library of Congress.

Tōyō Kyōkai (東洋協會; 1898 - 1945), also known as the Oriental Society, was founded in Tokyo as the 'Taiwan Society' (台灣協會 Taiwan Kyōkai) by a leading group of Japanese political and business figures to coordinate with the government on colonial policy. The group began to publish reports on its work and set up a school in 1900 to train colonial administrators for Taiwan. After the Russo-Japanese War, the organization broadened its focus from Taiwan to East Asia as a whole and was renamed Tōyō Kyōkai. Throughout the organization's history, its leadership included leading Japanese statesmen and business figures; for instance, in 1938 the President (會長) was Mizuno Rentarō (水野錬太郎; 1868 - 1949) and the Vice President was Nagata Hidejirō (永田秀次郎; 1876 - 1943). Nagata was twice the mayor of Tokyo and held cabinet positions in the Japanese Diet, including as Minister of Colonial Affairs in 1936 – 1937. Mizuno had served in many roles in government and been involved in several key events of the Taisho and early Showa eras. He is considered partly responsible for spreading anti-Korean rumors in the aftermath of the Great Kanto Earthquake that led to massacres of Koreans in Tokyo and Yokohama. After World War II, he was arrested as a Class A war criminal for his involvement with Dai-Nippon Koa Domei (大日本興亜同盟), an ultranationalist society that was formed in 1941 to subsume dozens of pre-existing organizations. Tōyō Kyōkai was dedicated to disseminating information about Korea, Manchuria, China, Taiwan, and other places in East Asia, especially their economies. It published a monthly magazine titled Tōyō (東洋) along with several other periodicals, research reports, and monographs on the politics, economics, and societies of various places in East Asia. It ceased functioning at the end of the war, but a new Taiwan Society was founded in Tokyo in 1950 by veterans of the colonial government and former Japanese settlers on Taiwan. It still exists today and coordinates with the Japanese and Taiwanese governments to promote mutual exchange and understanding. Learn More...

Good. Some wear along fold lines. Verso repairs along middle fold line. Soiling at right-center.
Looking for a high-resolution scan of this?