1702 Stoopendaal Map of the Travels of the Apostle Paul 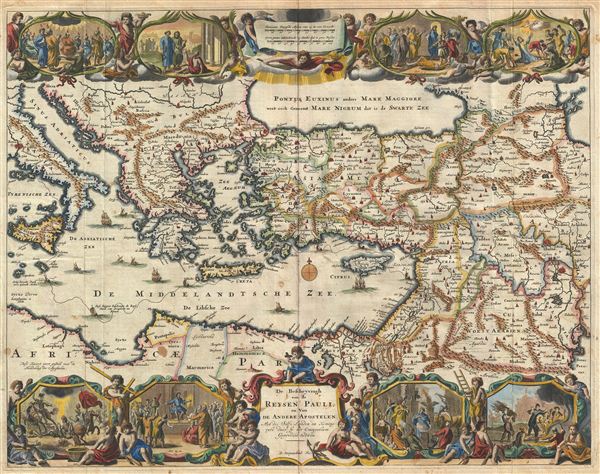 1702 Stoopendaal Map of the Travels of the Apostle Paul

This is a splendid early example of Daniel Stoopendaal and Jacob Keur's 1702 map of the travels of the Apostle Paul. The map covers the eastern Mediterranean from Sicily to the Holy Land and inland as far as the Persian Gulf and the Caspian Sea, including the modern day countries of Israel, Palestine, Cyprus, Jordan, Lebanon, Syria, Turkey, Italy, Georgia, Armenia, Egypt, and Iraq. The travels of Paul between Canaan and Italy are illustrated with a dotted line.

This map is derived from Nicholas Visscher's 1645 map of the same name, and though cartographically nearly identical, features updated decorative elements. These include scenes from the life and travels of the Apostle Paul. Just to the right of the title cartouche a there is fisherman holding an anchor – a nod to Visscher who used the 'fisherman' iconography to represent his patrimony.