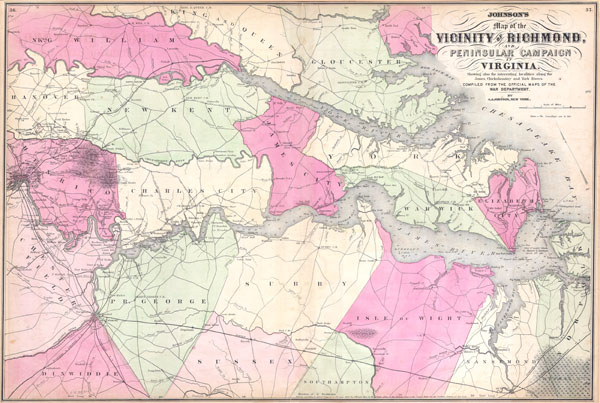 Johnson’s Map of the Vicinity of Richmond, and Peninsular Campaign in Virginia Showing also the interesting localities along the James, Chickahominy and York Rivers. Compiled from the official maps of the War Department.
1862     18 x 27 in (45.72 x 68.58 cm)

This is a rare and important 1862 map of the Vicinity of Richmond during the civil war by A. J. Johnson. Shows the Union Advance during the Peninsular Campaign of the American Civil war. Also includes considerable detail ranging from soundings to individual buildings, wells, and bridges. It is extremely rare to find this map in good condition as it fully occupied its page in the Johnson's atlas, lacking space for substantial borders. Consequently any edge damage, common in old Johnson atlases, invariably severely impacted the map itself. Map is dated and copyrighted 'Entered according to Act of Congress in the Year 1862 by J. Knowles Hare in the Clerks Office of the District Court of the United States of the Southern District of New York.'

Fine or perfect condition. Very light discoloration on centerfold. Blank on verso.
Looking for a high-resolution scan of this?