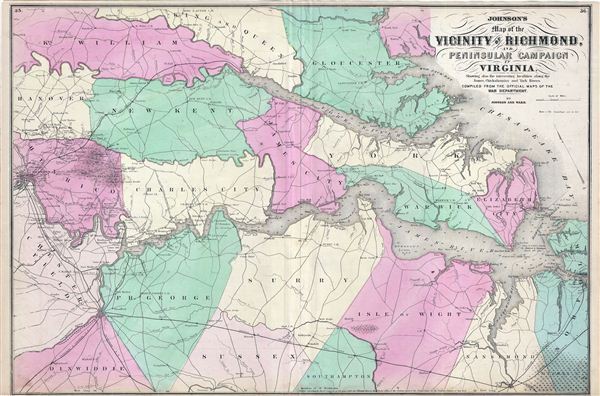 Johnson’s Map of the Vicinity of Richmond, and Peninsular Campaign in Virginia Showing also the interesting localities along the James, Chickahominy and York Rivers. Compiled from the official maps of the War Department.
1862 (dated)     18 x 27 in (45.72 x 68.58 cm)

The Peninsula Campaign (also known as the Peninsular Campaign) of the American Civil War was a major Union operation launched in southeastern Virginia from March through July 1862 and the first large-scale offensive in the eastern Theater. The operation, commanded by Major General George B. McClellan, was an amphibious turning movement against the Confederate Army in northern Virginia, intended to capture the Confederate capital of Richmond. McClellan was initially successful against the equally cautious General Joseph e. Johnston, but the arrival of the bold and aggressive General Robert e. Lee turned the subsequent Seven Days Battles into a humiliating Union defeat.

It is extremely rare to find this map in good condition as it fully occupied its page in the Johnson's atlas, lacking space for substantial protective margins. Consequently any edge damage, common in old Johnson atlases, invariably severely impacted the map itself. The map is dated and copyrighted 'entered according to Act of Congress in the Year 1862 by J. Knowles Hare in the Clerks Office of the District Court of the United States of the Southern District of New York.'