1867 Weyss Map of the Defenses and Siege of Richmond, Virginia 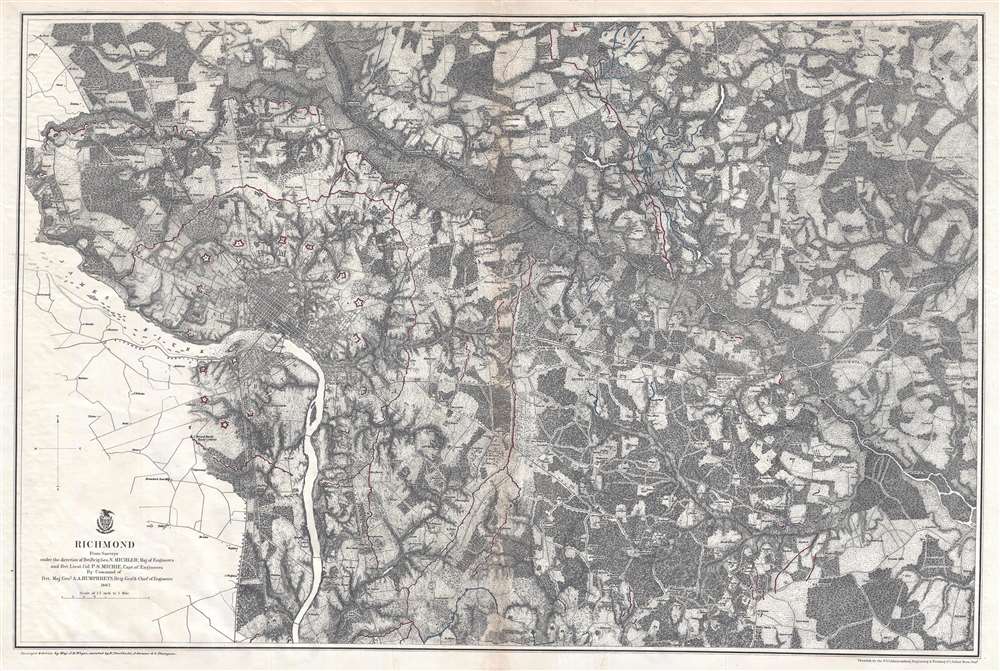 1867 Weyss Map of the Defenses and Siege of Richmond, Virginia

Illustrates in detail Richmond, the capital of the Confederacy, and its environs, along with Confederate and Union fortifications.

This is an 1867 John Weyss and Nathaniel Michler map of Richmond, Virginia, the Capital of the Confederacy, and its environs. The map depicts the region from the Western Plank Road to Hopewell Church and from Yellow Tavern to Willis Methodist Church. Highly detailed, both Confederate and Union fortifications are illustrated, with Confederate lines colored red and Union lines colored blue. The street grid of Richmond and Manchester are illustrated, and farms, mills, churches, and other landmarks are identified throughout. Several railroads, including the Richmond and Fredericksburg, the Richmond and Petersburg, and the Virginia Central are illustrated and labeled, as are the Mechanicsville Turnpike, the Williamsburg Turnpike, and the Brook Turnpike. Cold Harbor, Virginia, the site of the Battle of Cold Harbor, is located only ten miles northeast of Richmond, situating it, and the battle lines, in the upper right quadrant.

Richmond was strongly defended by General Lee and the Army of Northern Virginia but suffered over ten months of siege during the Richmond-Petersburg Campaign, which lasted from June 9, 1864 until March 25, 1865. Although popularly known as the Siege of Petersburg, the campaign did not take the form of a classic military siege, instead it consisted of nine months of brutal trench warfare, presaging the horrors of World War I. Petersburg was the main supply hub for Richmond, since five different railroads converged there. Numerous actions were fought over the course of the campaign, with most of the fighting near Richmond taking place in October 1864 at Darbytown and Fair Oaks. By the end of the campaign, over thirty miles of trenches stretched from the outskirts of Richmond to the eastern and southern outskirts of Petersburg. Richmond never came under direct Union assault during the campaign. Instead the Confederate government elected to flee the city 'Evacuation Sunday', April 2, 1865, via the last open railroad, the Richmond and Danville. Retreating Confederate soldiers were under orders to burn the armory, bridges, and any supplies left in the city as they left. Since the city was essentially abandoned, the fire spread out of control and destroyed large sections of the city, an event that has become known as the Evacuation Fire. Union troops entered the city the following day (April 3) and were able to finally put out the fire, and soon after began the occupation of Richmond. General Lee and the Army of Northern Virginia surrendered to General Grant seven days later on April 9, 1865, effectively ending the American Civil War.