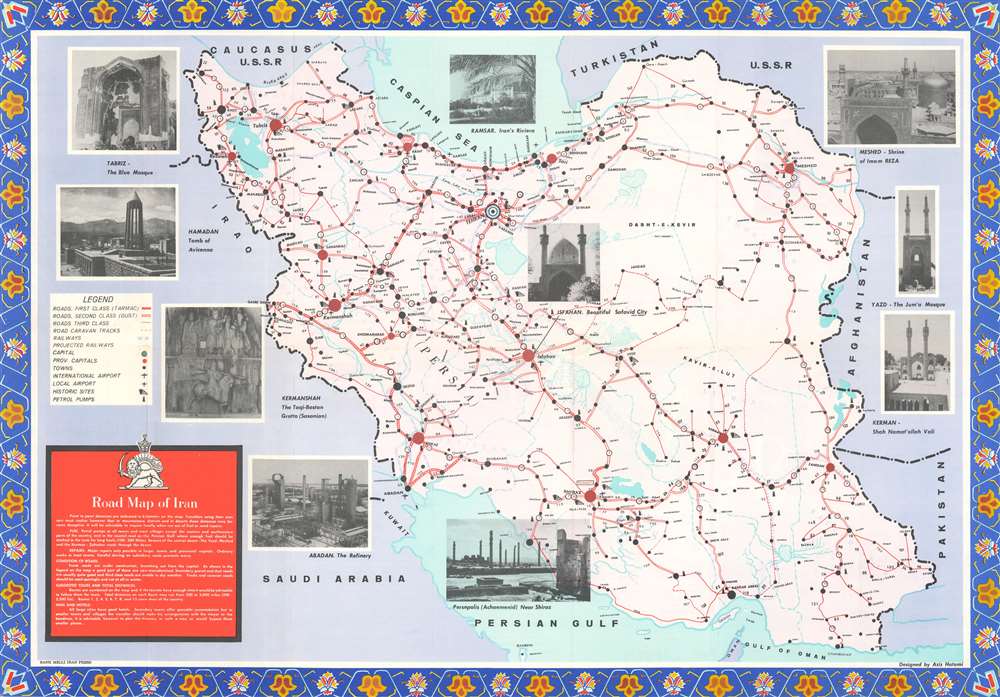 A wonderful road map of Iran highlighting its historic sites, including Persepolis and the Blue Mosque.
$400.00

This is a c. 1970 Aziz Hatami pictorial road map of Iran. The map depicts the region from Iraq to Afghanistan and from the Caucasus, the Caspian Sea, and Turkmenistan to the Persian Gulf and the Gulf of Oman. Cities, towns, and villages throughout the country are labeled and connected by varying grades of roads. All roads are illustrated in red, with tarmac roads highlighted by two thick parallel lines connected by crosshatching. Solid, passable dirt roads are marked by two parallel red lines, and third-class roads, which the map advises to use only in dry weather, are marked by a single red line. Dashed lines, signifying tracks and caravan roads, 'should be used sparingly and not at all in winter'. Tehran, the capital of Iran, is marked by two concentric circles, while large red dots signify provincial capitals. Distances between cities are given in miles, and airports, historic sites, and gas stations are also identified. Railways and projected railways are also illustrated, as are Iran's rivers and lakes. The blue dashed lines appear to mark provinces, but there is no clear indication that this is so. The whole is surrounded by photographs of famous sites around Iran, including Persepolis, the Jum'a Mosque in Yazd, the Safavid City in Isfahan, and the Blue Mosque in Tabriz.

This map was designed by Aziz Hatami and published by the General Department of Publications and Broadcasting in Iran. Three examples are catalogued in the OCLC as being part of the institutional collections at the University of Pennsylvania, the University of Chicago, and the University of Oxford. This map is rare on the private market.

Aziz Hatami (fl. c. 1960 - 1979) was an Iranian cartographer and author active in Tehran during the 1960s and 1970s. He is credited with designing a map of Isfahan, a road map of Iran, and writing books about Iran and several Iranian cities, including Isfahan, Persepolis, Shiraz Learn More...

Very good. Light wear along original fold lines, at fold intersections, and along margins. Text and printed photographs on verso.