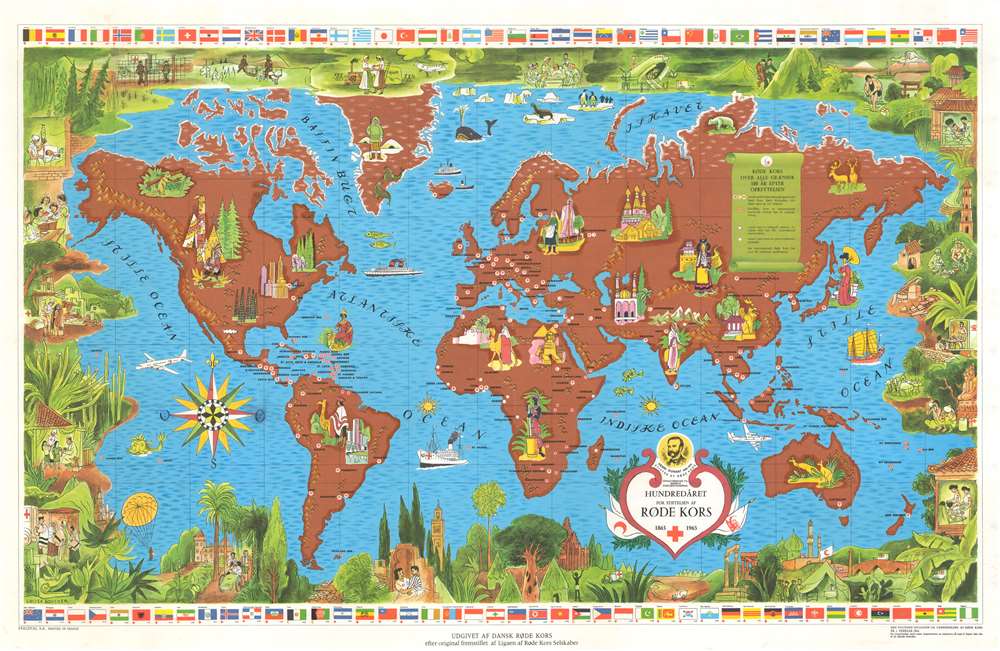 This 1962 Lucien Boucher pictorial map of the world celebrates the 100th anniversary of the Red Cross. Red crosses, red crescents, and a red lion with sun (Iran) symbols incised in white circles mark Red Cross, Red Crescent, and the Red Lion and Sun Societies. Red circles mark 'colonial' Red Cross outposts in Hong Kong, the Caribbean, Indonesia, and Polynesia. Pictorial vignettes highlight world cultures, including New York's skyline, llamas in South America, camels in North Africa, the Giza Pyramids and the Sphinx in Egypt, and kangaroos in Australia. Planes and ships marked with red crosses travel worldwide. A pictorial border surrounds the entire map and is made up of scenes of Red Cross, Red Crescent, and Red Lion and Sun Society workers, volunteers, and vehicles caring for individuals from every corner of the world. Flags of countries with Red Cross chapters line the top and bottom border.

The Red Cross and Red Crescent

The International Red Cross and Red Crescent Movement is a global humanitarian organization dedicated to preventing and alleviating human suffering. The Red Cross was founded in 1864 following the First Geneva Convention as a politically neutral humanitarian effort to bring medical care to war-torn areas. The organization originally included chapters in 12 countries, but by the end of the 19th century had resonated around the world. Alternate terminology, including the 'Red Crescent', 'Red Lion', and 'Red Diamond' were adopted to conform to regional religious and political affiliations. The organization is generally associated with wartime hospital care, and was active in both World War I and World War II, but also provides aid in most global health crises. Today the Red Cross operates in nearly every country in the world and is a major force in global health and aid work.

This map was created by Lucien Boucher and published by the Danish Red Cross in 1962. We are aware of two editions. The first was published by the League of Red Cross Societies in Geneva in French. The present Danish example was published after the French edition. This map is not cataloged in OCLC and this is the only known surviving example of the Danish variant - although others may exist.

Very good. Mounted poster-style on linen.
Looking for a high-resolution scan of this?