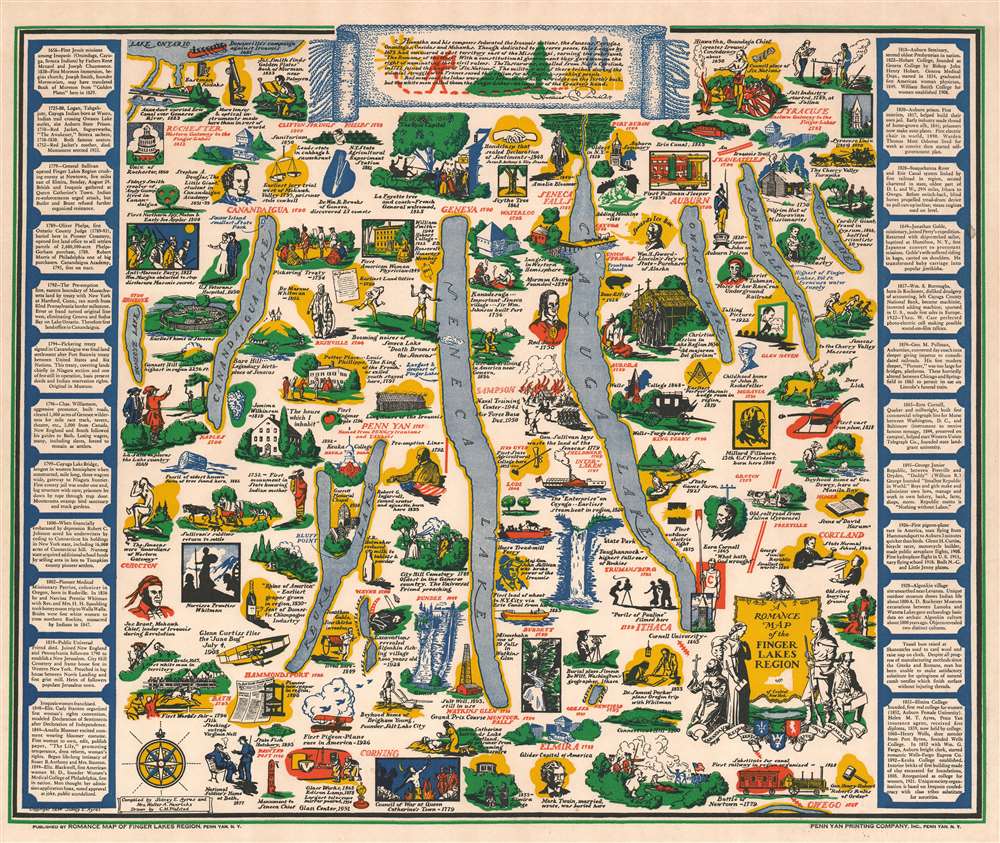 A newly-identified state of a charming pictorial map of the Finger Lakes.
$550.00

This is a newly-identified second state c. 1955 Sidney E. Ayres pictorial map of the Finger Lakes region of New York. Vignettes highlighting historical events and important figures who lived, worked, or were educated in the area, populate the map and surround the Finger Lakes. Beginning with Hiawatha's creation of the Iroquois Confederacy, the region's history leaps off the page. Special attention is paid to the colonial and revolutionary eras. Regional innovations, including the invention of the adding machine, the Pullman sleeper, the cast-iron plow, and 'talking' pictures (movies with sound) are heralded. Important historical figures with a connection to the area, such as Harriet Tubman, President Millard Fillmore, and Stephen A. Douglas, appear alongside Joseph Smith, the founder of the Mormon church, and Brigham Young. They both came from this part of the world. Joseph Smith may have even translated the 'Golden Plates' here in 1829. The 1848 Declaration of Sentiments was penned here by Susan B. Anthony and Elizabeth Cady Stanton during the first women's rights convention. Small texts line the left and right sides and provide short histories of some of the important events illustrated on the map.

While researching this map, it became clear to us that the present example represents a newly-identified state of this map. Before, only two states of this map were recognized. The first was published and copyrighted in 1934, and the second, with a few minor changes, was published in 1962. While examples of the present map have appeared on the market before, we believe it falls between the 1934 and 1962 copyrighted states. Two minor changes from the 1934 state and the offered example led us to this conclusion. The first change, which appears along the bottom border on the left, is the inclusion of 'Glass Center, 1951' by the Corning Glass Works. The second, situated near the center of the map between Seneca Lake and Cayuga Lake, is the reference to the 'Naval Training Center - 1942' followed by 'Air Force Base Dec. 1950', the inclusion of which erased part of the vignette illustrating General Sullivan's destruction of the Seneca's land in 1779. Furthermore, the 1962 copyright date does not appear in the lower-left corner, signaling that this state predates that one. It was the combination of the additions from later dates and the lack of the 1962 copyright date that led us to the conclusion that this state must fall between the other two.

This map was compiled by Sidney E. Ayres and Mrs. Walter A. Henricks, drawn by C.M. Plaisted, and published in Penn Yan, New York, by the Penn Yan Printing Company and the Romance Map of Finger Lakes Region. Fives examples are cataloged in OCLC and are part of the institutional collections at the State University of New York Binghamton Library, the Library of Congress, Pennsylvania State University, the Buffalo and Erie County Public Library, and the University of Minnesota, Minneapolis. Unfortunately, we have been unable to determine with one hundred percent certainty which state of the map each institution holds.

Sidney E. Ayres (July 11, 1900 - January 26, 1960) was an American newspaper publisher. Born in Penn Yan, New York, Ayres was a graduate of Cornell University. He took over publishing the Penn Yan Chronicle-Express in 1928 following the death of his father. Ayres also served as a director and president of the New York State Press Association, and was also a member of the Western New York Press Association and the National Editorial Association. Learn More...