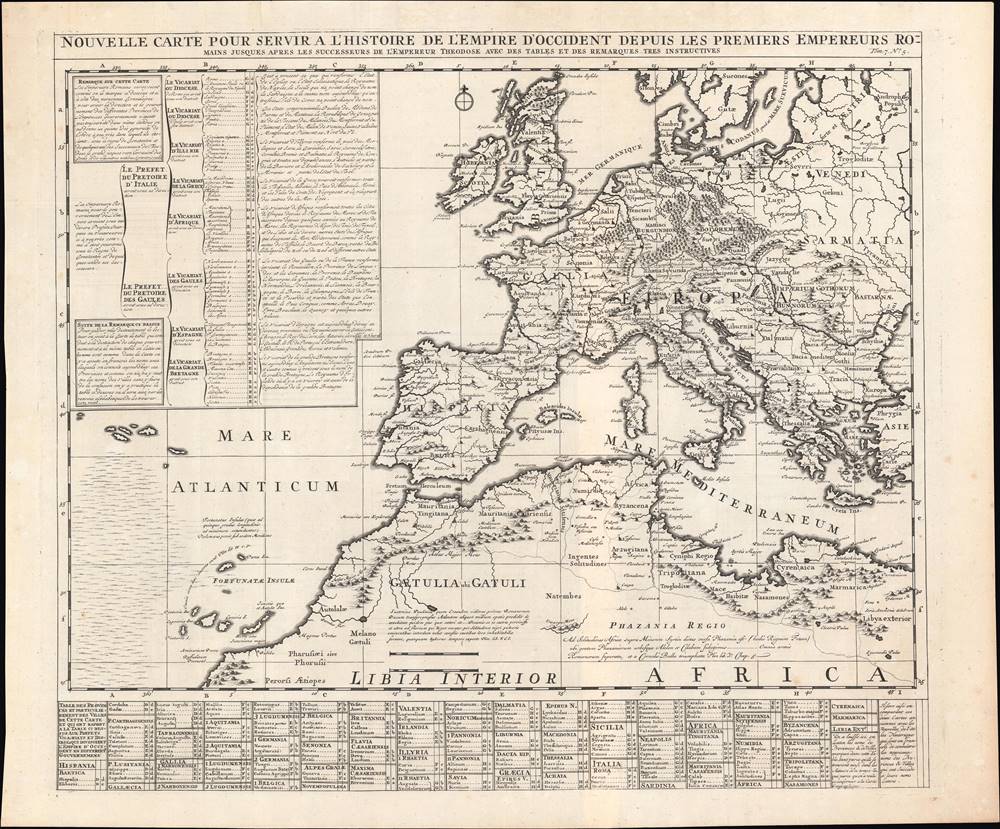 This is a superbly engraved 1720 Henri Châtelain map of the Western Roman Empire from Châtelain's Atlas Historique. It is a rich, well-researched source that ambitiously aims to represent some 500 years of Roman history and geography.

The map's full title (translated to English) is: 'New Map to Serve as the History of the Western Empire from the First Roman Emperors until after the Successors of Emperor Theodosius, with Very Instructive Tables and Notes.' In other words, it represents the Roman Empire from Augustus through the division of the empire under Diocletian to the collapse of the Western Empire and the Fall of Rome, or from the 1st Century BCE through the end of the Western Empire in the 5th Century CE. Interestingly, the extensive notes are quite forthright about the near-impossibility of creating such a map given the changes in the size of the empire, placenames, and administrative divisions over the period in question, admitting that this is only an approximation most closely resembling the Western Empire in the time of Constantine I or one of his immediate successors (in the 4th Century CE).

The map incorporates a grid system with capital letters for rows and lower-case letters for columns. These coordinates are used in two tables to locate provinces and cities of the Western Empire. The table at left in French shows the administrative breakdown of the Western Roman Empire, with the Prefectures of Italy and Gaul and their subordinate Dioceses or Vicariates and Provinces, with notes explaining which contemporary (to Châtelain) polities correspond to the Roman territories. The table at bottom lists the Latin names of Roman Provinces and the cities therein with their grid coordinates.

Latitude and longitude are indicated, with the prime meridian off the coast of Ireland and running through Iberia and northern Africa. Considerable detail is provided about areas of Africa beyond the reach of the empire, quoting Pliny (the Elder's) Naturalis historia for descriptions of Phazania (Fezzan), Gaetulia (Berber inhabited area south of the Atlas Mountains), and so on. The map also notes the semi-mythical Fortune Islands (Fortunatas Insulas), here roughly consistent with the Canary Islands, which Ptolemy and his Medieval successors used to calculate longitude and determine a prime meridian. Finally, some portions of the Eastern Empire (such as Greece) and the tribes beyond the reach of the empire in Central and Eastern Europe are also indicated.

Henri Abraham Châtelain's Atlas Historique, ou Nouvelle introduction à l'histoire, à la chronologie et à la géographie ancienne et moderne was published in multiple editions between 1705 and 1720; this map appeared as Plate No. 5 in Volume 7, published in 1720. Although written in French, the atlas was published in Amsterdam as part of an even more ambitious encyclopedia project and was considered among the best Dutch atlases of its day. The Atlas Historique is well represented in OCLC, although this separate map is cataloged in only three institutional collections, the Biblioteca Nacional de España (cataloged as a 1732 edition), the Bayerische Staatsbibliothek, and the Duchess Anna Amalia Library in Weimar.

Very good. A couple minor spots of discoloration in the margins.