1861 Johnson Map of the Roman Empire 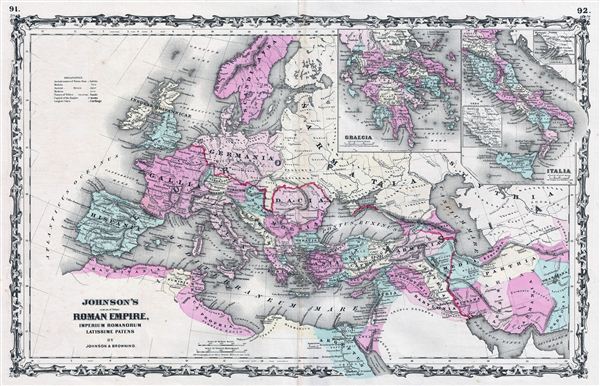 1861 Johnson Map of the Roman Empire

An attractive example of A. J. Johnson and Ross C. Browning's 1861 map of the Roman empire. Covers all of europe as well as much of the Middle east, Persia and parts of North Africa. Presents the Roman empire following the Punic Wars, when it reached at its greatest influence. Insets detail Greece and the Italian peninsula. Uses ancient place names.

Features the strapwork style border common to Johnson's atlas work from 1860 to 1863. Published by A. J. Johnson and Browning as plate numbers 91-92 in the 1861 edition of Johnson's New Illustrated Family Atlas. This is the last edition of the Johnson Atlas to bear the 'Johnson and Browning' imprint. Subsequent editions reflect Ward's 1862 acquisition Ross C. Browning's shares in the firm.