1854 Spruner Map of the Roman Empire 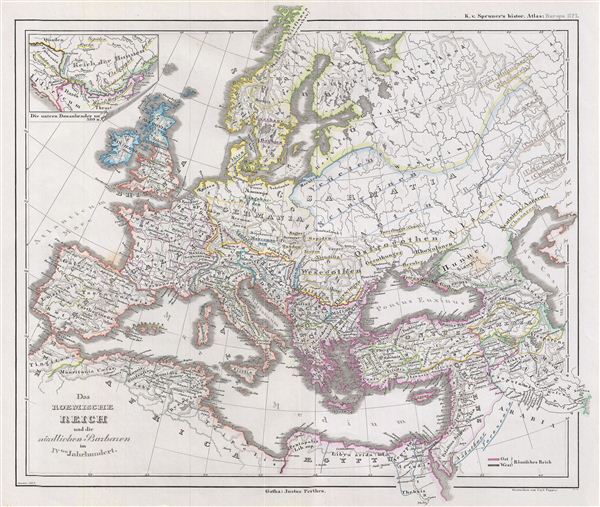 1854 Spruner Map of the Roman Empire

This is Karl von Spruner's 1854 map illustrating the Roman empire and the northern Barbarians tribes during the 4th century. The map covers the span of the Roman empire from the British Isles south, as far as Africa, and from Portugal to the Caspian Sea in the east. An inset map on the top left corner details the Lower Danube countries in 380. The map is designed to illustrate Roman empire's Gothic Wars between 376 and 382 Ce. Fought between the Goths and the Roman empire, the 378 Ce Battle of Adrianople is considered the beginning of the fall Roman empire. The battle resulted in an overwhelming victory for the Goths a subsequent series of barbarian invasions leading, ultimately, to the collapse of the Western Roman empire. The whole is rendered in finely engraved detail exhibiting throughout the fine craftsmanship of the Perthes firm. Prepared by Karl Spruner for publication in the second edition of Justus Perthes' 1854 Historich-Geographischer, Hand-Atlas zur Geschichte der Staaten europa's vom Anfang des Mittelalters bis auf die Neueste Zeit.