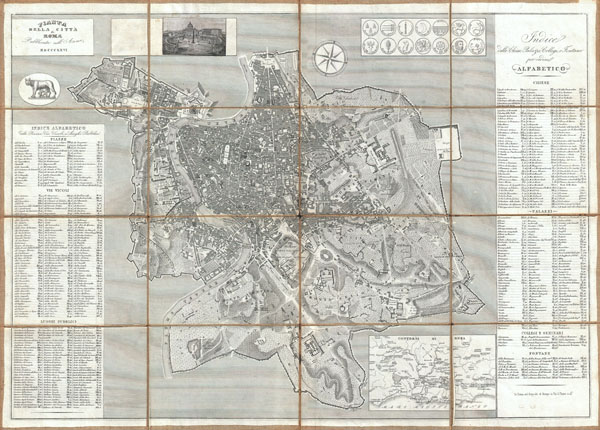 An extraordinary 1864 case map of Rome by Augusto Fornari. Focuses on the old walled city of Rome and includes the Vatican, the Coliseum, the Pantheon, and various other historic buildings, plazas, bridges, parks, and streets. The upper left quadrant features an engraved view of the Basilica of St. Peter and another of Romulus and Remus, mythical founders of Rome, suckling at the teats of a she wolf. Upper right quadrant features armorial symbols for each of Rome's 14 districts. Lower right quadrant offers a plan of the region surrounding Rome. Surrounded on both the right and left with an alphabetical index of Rome's important plazas, streets, public places, palaces, fountains, seminaries, and churches. This map heavily references, with various updates and revisions, the seminal 1734 map of Rome by Giovanni Battista Nolli. Nolli's map was the first modern map of Rome and basis of almost all subsequent maps of Rome until approximately 1870, when Rome became the capitol of Italy and more modern plans were issued. Designed with the traveler in mind and thus bisected and backed with linen for easy folding. Comes with original slipcase made of orange marbled paper. Slipcase bears the stamp, 'Souvenir de Rome, 47 Rue S. Chiara.' This map was originally owned by W. T. Davis, whose name appears on the verso along with the date, 'Rome 16th March 1867.'

Augusto Fornari (fl. c. 1853 - 1866) was a Rome based map publisher active in the middle to late 19th century. His publishing firm focused on guides and plans for tourists in Italy. His corpus includes several maps of Rome, which he updated yearly, as well as a few maps of other Italian cities and of the Italian countryside. Little else is known of this elusive publisher. Learn More...

Very good condition. Disected and mounted onto linen in 16 sections. Original linen backing and edging in excellent condition with only minor wear at fold interesections. Comes with original orange marbled slipcase, which has several tape repairs.