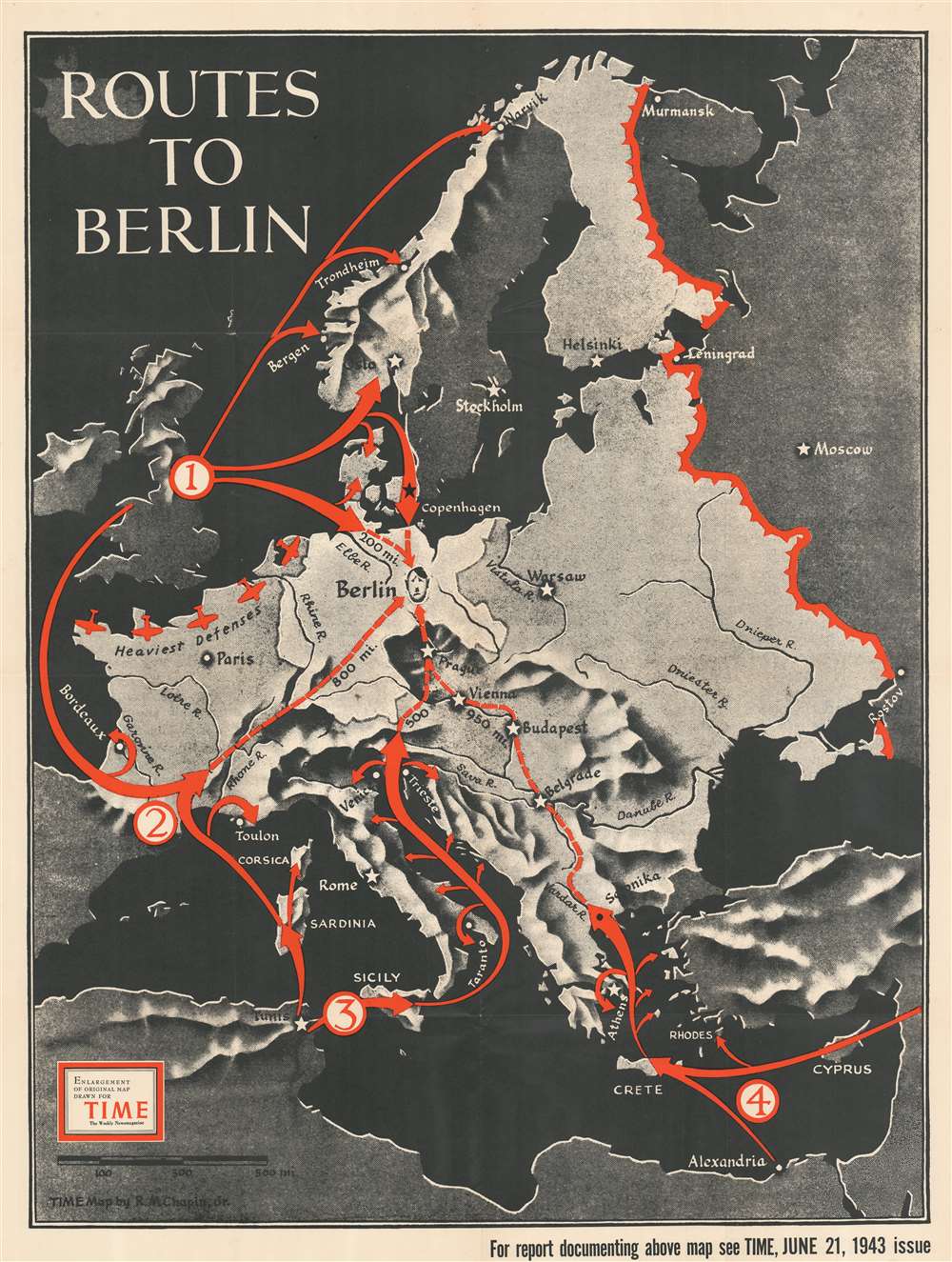 This is a large, separately issued 1943 Robert M. Chapin, Jr. map Europe. Created for TIME, the map illustrates four possible Allied invasion strategies proposed by Colonel Conrad H. Lanza, U.S. Army (ret.) (1878 - 1963) in an article published in the June 1943 issue of the Field Artillery Journal. In this article, Colonel Lanza discussed potential Allied invasion points around continental Europe, although he did not attempt to predict where or when an invasion would take place. Each of Lanza's plans focused on the central Allied objective - capturing Berlin. Here, Chapin and TIME detail four of his proposed possibilities. The first involved an invasion of Norway between Oslo and Kristiansand, which would also necessitate landings on the western and northern Norwegian coasts are diversions. The Allies would then have a shorter distance to travel between Norway and Berlin but would have to combat large concentrations of enemy soldiers in a relatively small geographic area. This plan would also force the Allies to forcibly liberate Copenhagen, which would be a difficult task to say the least. Possible landings in Belgium and the Netherlands were also included by Chapin in this first possibility. Lanza's second proposal illustrated here involved invading southwestern France along the Spanish border from the Atlantic and Mediterranean coasts nearly simultaneously. The third option took advantage of Allied positions in Sicily, Sardinia, and Corsica to land troops in the northern Adriatic. Lanza proposed this option, it appears, because western Italy's terrain (the Alps and several major rivers) made invading Germany from there much more difficult. The final option depicted here is an Allied invasion of the continent through the Aegean Sea and Greece. Lanza pointed to the difficulties presented by German-held islands in the Aegean alongside the distances involved (on the order of 950 miles) and implied that this strategy was unlikely.

This map was drawn by Robert M. Chapin, Jr. for TIME to accompany an article published in the June 21, 1943 issue. The present example is a separately issued enlargement. Five examples are cataloged in OCLC and are part of the institutional collections at Central Connecticut State University, Franklin and Marshall College, the University of Michigan, Wichita State University, and Stanford University. An example is also part of the David Rumsey Collection.