1854 Spruner Map of the Russian Empire 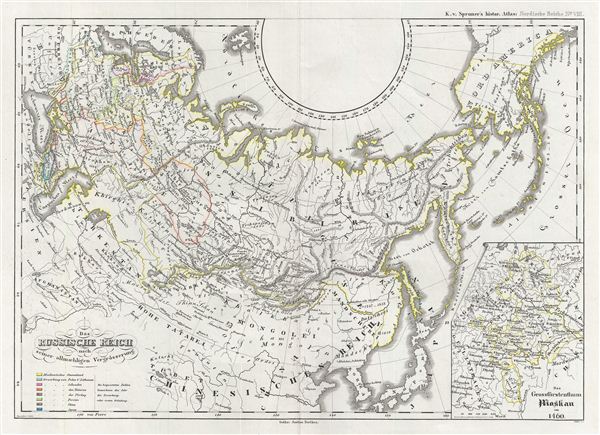 1854 Spruner Map of the Russian Empire

This is Karl von Spruner's 1854 historical map of the Russia empire following its gradual transcontinental expansion in the 18th century. The map covers from the Arctic Ocean south to China, and from Sweden to North America. An inset map on the bottom right corner details The Grand Dutch of Moscow (Muscovy) around 1460. During this time, Ivan III was the Grand Prince of Moscow and all of Russia. One of the longest reigning rulers of in Russian history, he managed to triple the territory of his state. The first to use the title of Tsar, he freed Russia from Tartar control and made Moscow the most powerful city in Russia, hence earning him the title of 'Ivan the Great.' The whole is rendered in finely engraved detail exhibiting throughout the fine craftsmanship of the Perthes firm. Prepared by Karl Spruner for publication as plate N VIII in the second edition of Justus Perthes' 1854 Historich-Geographischer, Hand-Atlas zur Geschichte der Staaten europa's vom Anfang des Mittelalters bis auf die Neueste Zeit.