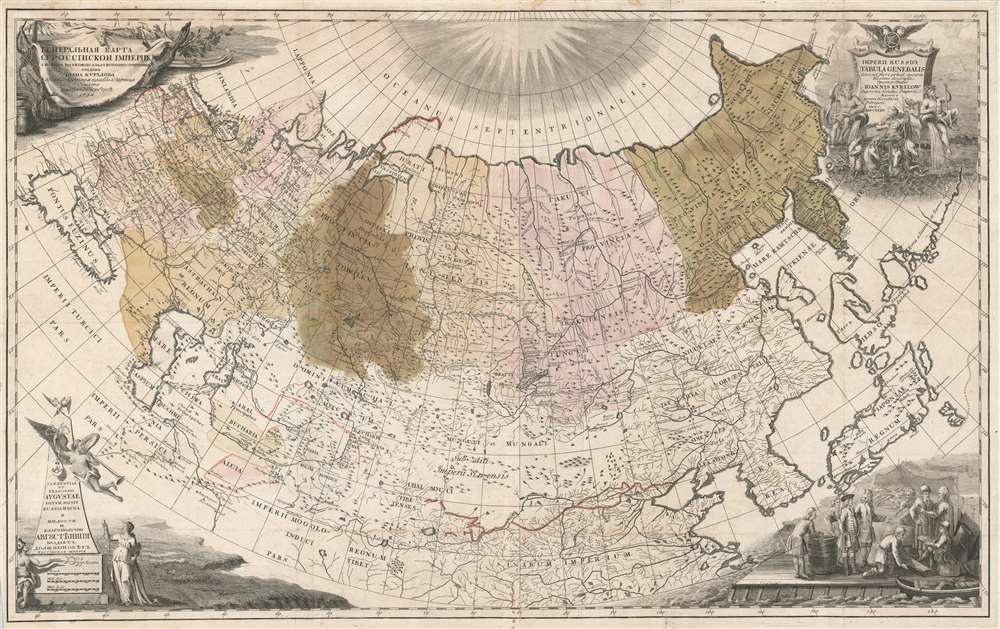 An incredibly rare and important map, this is Ivan Kirilov's 1734 large format map of the Russian Empire. Printed in Petropoli, Russia, this is the first scientifically accurate map of the Russian Empire printed in Russia. It is also the first printed map to show the cartographic results if Vutys Bering's First Kamchatka Expedition (1727 - 1730) AND the first appearance of any part of Alaska (St. Lawrence Island) on a printed map. The map's coverage extends from the Black Sea to the Bering Strait, and from the north pole to the Persia, Korea, Japan, and the Yangze River. Decorative cartouche work adorns all four comers and underscores the Tzardom's wealth and power.

The First Scientific Map of Russia

This is the first published scientific map of the Russian Empire. A new comprehensive survey of the Russian Empire was ordered by Peter the Great in 1721. Ivan Kirilov, an accomplished surveyor with the Senate Chancellery, was assigned to the complex task of compiling explorer's data and newly commissioned local surveys. According to Bagrow, 'Kirilov was one of the most enlightened Russians of the early eighteenth century' and 'one of the first of Russian map-makers to apply Western-European methods of cartography.' Bagrow goes on to write, 'the general map of Russia … while not giving very many details, is yet the earliest map that actually presents Russia as a whole on more or less accurate lines, together with her seacoasts and network of rivers.'

Methodology and the Debate with De L'Isle

Although fully in charge of the project, Kirilov harnessed the resources of Peter the Great's St. Petersburg Academy of Sciences and more specifically the French 'cartographer in residence' Nicholas de L'Isle, younger brother of the great Guillaume de L'Isle. De L'Isle ideologically argued for the construction of a triangulation net, employing a methodology similar to what Cassini used to map France in meticulous detail. Kirilov, ever more practical, believed correctly that the sprawling expanse of the Russian Empire made such a systematic approach impractical. He instead based the geodetic underpinning of the map on astronomically determined coordinates which he correlated to existing pre-Peterine mapping of rivers and tracks. Kirilov's hard stance on the methodology enabled him to produce his map in a relatively short period of time, at least in comparison with the efforts an empire-wi9de triangulation system would have demanded.
br<>Although the finest map of Russia yet seen, the compilation process underscored the degree to which the exact borders of many provinces and uyezds were ambiguous, leading to insufficient geodetic references and thus a longitudinal overestimation of the empire by about 8°.

Although it may seem like an afterthought on the map, the tiny St. Lawrence island off of the coast of Siberia's remote Chukchi Peninsula in in fact the first European sighting of any part of Alaska. The Bering Strait island was discovered and mapped by 1728 during Bering's First Kamchatka Expedition. Bearing named it, St. Lawrence Island after the day he first visited it, St. Lawrence's Day, August 10, 1728. The island is the first place in Alaska definitively known to have been visited by European explorers. This map, following the expedition by some 5 years, is the first printed map to show the results of Bering's expedition and, as such, the first printed map to illustrate any part of Alaska.

This is the first printed map to include cartographic data from Bering's first expedition, known as the First Kamchatka Expedition (1727 - 1730). In December of 1724, the Danish navigator Vitus Bering was commissioned by Tsar Peter the Great (Peter I) to explore the northern part of the Pacific Ocean and confirm the presence of the strait between Asia and America. After some delay, in January of 1727 the expedition finally set out under Bering's command. Bering spend the subsequent three years exploring the northeastern coasts of Siberia. He rounded the Chukchi Peninsula, passing through the Bering Strait, thus confirming that North America and Asia were indeed, not attached. Returning to St. Petersburg in February of 1730, Bering was hailed as a hero, ennobled, and promoted. Data from the expedition was suppressed for several years, but Kirilov, with official access, published this, the printed first map based on Bering's discoveries, in 1734.

This map was compiled by Ivan Kirilov and published in Petropoli, Russia, as part of Kirilov's Atlas Imperii Russici. After Kirilov's death, most of his map plates, as well as existing copies of his atlas, were acquired by the St. Petersburg Academy of Sciences and suppressed - as the academy was at the time compiling its own competing atlas (issued 1745). As a result, all examples of Kirilov's work are extremely rare. According to map historian Leo Bagrow, there are only two complete surviving examples of his atlas, at the Moscow State Archives and the the Ecclesiastical Seminary at Irkutsk.

Based upon their representation in institutional collections, is certain that some of his maps, like the present map of Russia, were initially printed in greater quantities and disseminated as separate issues. Examples of this map are nonethelss exceedingly scarce to the market. The last example we have been able to isolate was offered as part of the Benevento Collection at Sotheby's at 2010, where it sold for about 7800 GBP or, roughly 11,700 USD. Like our map, that example also exhibited a partial fill repair.

Ivan Kirillovich Kirilov (Иван Курилов, 1689 - April 14, 1737) was a Russian cartographer and surveyor active in Moscow in the late 17th and early 18th centuries. He is considered to be the Father of Russian Cartography. He was born to a mid-level government official serving under Peter the Great. When Peter founded the Russian Naval Academy in 1701 many educated families encouraged their male children to enroll. Kirilov was enrolled one year later in 1702, when he was just 13. There he studied navigation under the polymath Leontij Magnitzki, and his assistants. He graduated from the academy in 1707, taking up a position in the Navy Department, which allowed him to travel and study in other parts of Europe. He later transferred to the Civil Service Land Survey Department, where he became a clerk and surveyor. There he impressed his superiors and was recalled to Moscow in 1712, to work in the head office of the Estates Department (Pomyestni Prikaz). He was subsequently transferred to the Senate Chancellery where he rose through the ranks and his reputation as a master mapmaker grew. When Peter the Great instituted a empire-wide survey, Kirilov was put at his head. Kirilov compiled new and existing survey work into a series of map between 1726 and 1834, which eventually were published as the Russia's first scientific atlas, the Atlas Imperii Russici. After the initial publication of his atlas, Kirilov continued to compile additional maps of Russia into an even greater survey. Unfortunately, defeated by his excoriating work ethic, the dedicated cartographer contracted consumption and died four years later, in 1737. After his death, all of Kirilov's work was acquired by the St. Petersburg Academy and suppressed, so surviving examples are exceedingly rare. Learn More...

Good. The map exhibits several old repairs. Most to margins. There is however a large area of repair and more recent reinforcement to the oxidized old color at center in the vicinity of Tobolen. In this area there is a 3 x 1 inch partial fill repair.