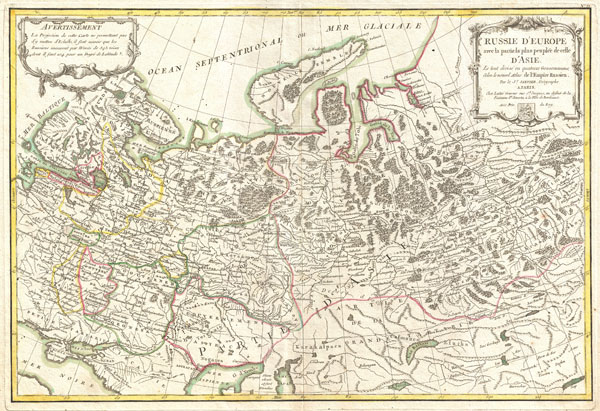 A beautiful example of Jan Janvier's curious decorative map of Western Russia. Covers from Poland and the Baltic Sea eastward as far as Ilimskoy, Siberia, extends south to the Black Sea and north as far as Nouvelle Zembla and the Arctic Sea. Ostensibly focuses on the most inhabited portions of the Russian empire in Europe and Asia. Offers excellent detail throughout showing mountains, rivers, forests, national boundaries, regional boundaries, forts, and cities. A large decorative title appears in the upper right quadrant. Upper left quadrant features an advertisement. Drawn by Jan Janvier around 1775 for issue as plate no. 22 in Jean Lattre's 1776 issue of the Atlas Moderne.