1736 Manuscript Map of Ukraine and Crimea during Russo-Turkish War 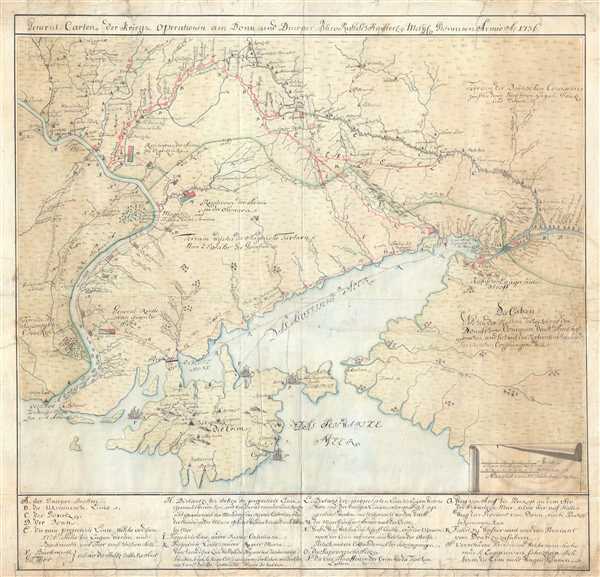 1736 Manuscript Map of Ukraine and Crimea during Russo-Turkish War

An original manuscript map detailing events during the first year of the Russo-Turkish War of 1735-1739 - most likely the template for several reduced atlas maps.
$6,000.00

This is the original 1736 manuscript map of Ukraine and the Crimean Peninsula that inspired reduced atlas editions by Joseph Nicolas de L'Isle and Matthäus Seutter, among others, and illustrates the events of the first year of the Russo-Turkish War of 1735-1739. The map depicts the region from Dnieper River to the Don River and from the Donetsk River to the Black Sea. The routes followed by Russian armies and the positions held during the siege of Azov are illustrated for the first full year of campaigning: 1736. Russian success in the war was marred by rampant disease and a severe lack of supplies. A highly detailed hand-drawn map, numerous towns and villages throughout the region are labeled, including Azov, St. Anne, and Perekop. The Sea of Azov is depicted in full, along with the northern portion of the Black Sea. Rivers and streams are illustrated throughout. A scale cartouche is drawn in the lower right corner and an index that corresponds with the alphabetically identified locations on the map is situated along the bottom border.

Launched immediately following the War of Polish Succession, hostilities were triggered by continuing raids by Crimean Tatars and a Russian desire for expansion around the Black Sea. The Russian army was split into two separate forces, as the road to the heart of the Ottoman Empire led around the western coast of the Black Sea, while the Turkish fortress at Azov, which controlled the mouth of the Don River, lay on the east side. To complicate matters, a large population of hostile Crimean Tatars inhabited the region along the northern coast of the Black Sea, meaning that extended supply lines to both the eastern and western armies would not be possible, as the Tatars could easily attack and disrupt either supply line.

Burkhard Christoph von Münnich, a German officer in the Russian army, was in command of the of the western force, which is illustrated here by several green and red boxes progressing south along the Dnieper River. Münnich and his force attacked the fortress on the isthmus of Perekop and easily overmatched the fortified Tatars. Münnich stomed into Crimea but had to withdraw by the fall of 1736 due to rampant disease and lack of supplies.

Count Peter von Lacy commanded the eastern army. Their objective was the Turkish fortress at Azov (Asoff), situated at the mouth of the Don River. Lacy and his army laid siege to the city (illustrated here) and benefited from a fortuitous turn of events when Azov's powder magazine exploded. The fortress surrendered not long after.

The Russian campaign of 1737 focused on the Crimea and points further west. Lacy invading the peninsula with a force of 40,000 men and shattered remaining Tatar resistance in two successive battles. Lacy was forced to withdraw from Crimea by disease and thirst, Just as Münnich had been the year before. Münnich marched his force, which was 80,000 strong, to lay siege to Ochakov (labeled here), a major Turkish fortress. This attack benefited from yet another magazine explosion that allowed Russian forces to quickly occupy the city. In what appears to be a never-ending refrain with regard to the 1735-1739 war, a plague epidemic and a shortage of supplies forced Münnich to withdraw from Ochakov, though he left a garrison in the city.

After an unsuccessful campaign in 1738, Russian forces crushed the Turks in two major battles in 1739, leading to the Turks to sue for peace. This, however, did not result in major gains for the Russians. The peace treaty forfeited some land along the northern coast of the Black Sea to Russia, along with Azov, though the treaty stipulated that Azov had to remain unfortified.

An important side note to the Russo-Turkish War of 1735-1739 is that Austria, buoyed by Russian victories in 1736, joined the fight on the Russian side in 1737, a conflict which has become known as the Austro-Turkish War of 1737-1739. The Austrians, however, never won a significant victory, and in fact lost two major battles to the Turks in 1739, leading to Austria signing a separate peace with the Ottomans a month before hostilities between Russia and the Ottoman Empire ended.

Per an indication in the lower right corner, this map was most likely created in Vienna around the time Austria entered the war. We believe this map to be the original manuscript map that inspired the atlas maps published by the Royal Academy in St. Petersburg, de L'Isle, and Seutter for several reasons. The first is its size. It nearly doubles the published versions, and, in the 1700s, paper was a luxury good. Copyists, either students or academics, did not commonly produce works that were twice the size of the original. The second is the inclusion of four extra points in the index along the bottom of the map. These four items label the battle lines and other boundaries illustrated on the map. When we referred to printed versions of this map, these lines were directly labeled, not identified by a letter that corresponded with a reference in the alphabetic index, as here.

Good. Expert restoration and some repaired tears along edges and one extending into the middle. See image.
Looking for a high-resolution scan of this?