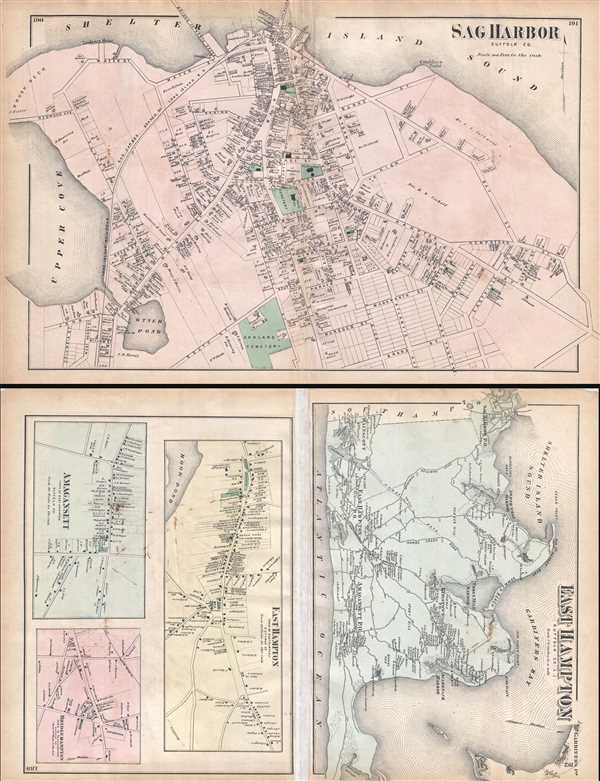 A scarce example of Fredrick W. Beers' map of the Sag Harbor and East Hampton, Long Island, New York. Published in 1873, this map is printed on both sides. On the Sag Harbor Side, this magnificent map covers the town of Sag Harbor in considerable detail from the Upper Cove to Shelter Island Sound. Details individual streets and properties. On the East Hampton side the sheet is divided into four maps detailed the general region of East Hampton from Wainscott and Sag Harbor eastwards past East Hampton, Amagansett to Gardiners Island and Napeague Harbor. Shows parts of Gardiners Island including the estate of S. B. Gardiner. Smaller maps detail the towns of East Hampton, Amagansett and Bridgehampton with notations for individual buildings and properties. This is probably the finest atlas map of Sag Harbor and East Hampton to appear in the 19th century. Prepared by Beers, Comstock & Cline out of their office at 36 Vesey Street, New York City, for inclusion in the first published atlas of Long Island, the 1873 issue of Atlas of Long Island, New York.

Very good. Some damage on original centerfold with repair on the East Hampton side of the sheet. Overall toning and spotting. Minor edge wear. Note: Image represents two sides of single sheet.