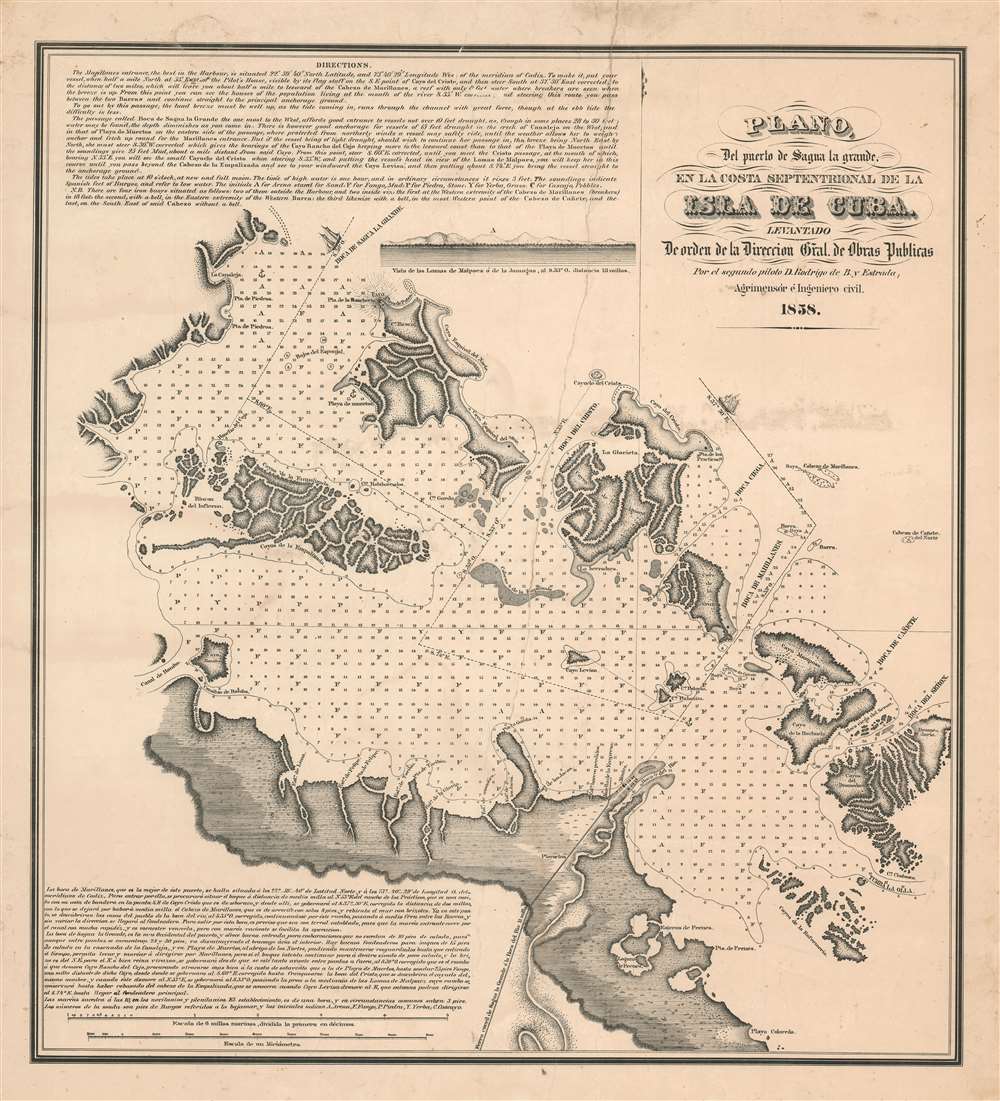 Only known chart detailing the entrance to Sagua La Grande during the Cuban Sugar Boom.
$950.00

A rare 1858 Rodrigo Bernardo de Estrada Cuban sugar boom nautical chart or maritime map of the vicinity of the port of Isabella de Sagua (here Boca el Rio) and the entrance to Segua la Grande, Central Cuba. This map was produced to facilitate international shipping from Isabella de Sagua, which in 1858 was connect by rail to the bustling Sagua Valley sugar plantations. The map details the vicinity of Isabela de Sagua, on the north central cost of the Villa Clara province Cuba. It includes routes through the complex barrier cayos (islands) into the Bahia de Carahatas, the Bahia de Segua la Grande and the Bahia de Novillo. Textual instructions for the mariner are offered in English and Spanish, suggesting the intended audience for this piece was both Cuban and American.

Today Sagua La Grande is a sleepy Cuban town with barely a car on its streets, but in the 19th century it became one of the most prosperous towns in Cuba. Segua La Grande was founded in 1812 and saw little development until the sugar boom of the 1830s, when the sugar plantation economy expanded into the Segua Valley. At this time, Cuban sugar plantations were world's the most important of sugar and were constantly looking for ways to expand their plantations. By 1840 it has some 59 sugar mills and produced more than a million arrobas a year.

The Sagua-Cruces railroad, connecting the Sagua Valley to the port of Isabella de Sagua, was conceived in 1852 by a conglomerate of Cuban sugar magnates. A railroad land concession was granted, and construction began in 1855, with a functional route to Isabela de Sagua (Boca el Rio) in place by 1858. The completion of the railroad turned the sleepy fishing port of Isabella, here shown but not labeled at the mouth of the Rio Segua la Grande, into one of Cuba's busiest ports. The shallow draft of the Bahia de Saguna la Grande and the complexity of navigating the barrier cayos (islands) led the civil engineer a surveyor Rodrigo Bernardo de Estrada to construct this map.

This map was drawn and surveyed by the surveyor and civil engineer Rodrigo Bernardo de Estrada. It was published in 1858. The map is uncatalogued and this is the only known example.

Rodrigo Bernardo de Estrada (fl. c. 1840 - 1860) was a Cuban lawyer and surveyor active in the middle part of the 19th century. It appears to have had some sort of official designation, but we have been able verify any governmental position. Bernardo de Estrada's work is most frequently associated with Sagua la Grande, Cuba.

Good. Some offsetting. A large repaired tear from upper border extending about half way through the page. Minor dampstaining.
Looking for a high-resolution scan of this?