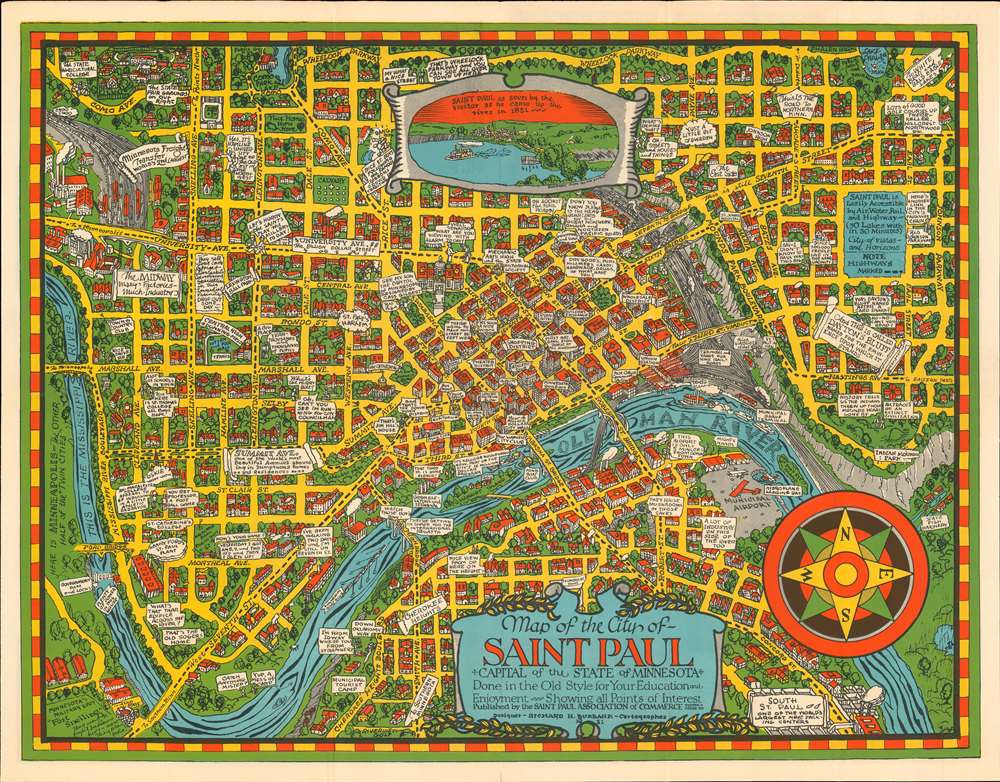 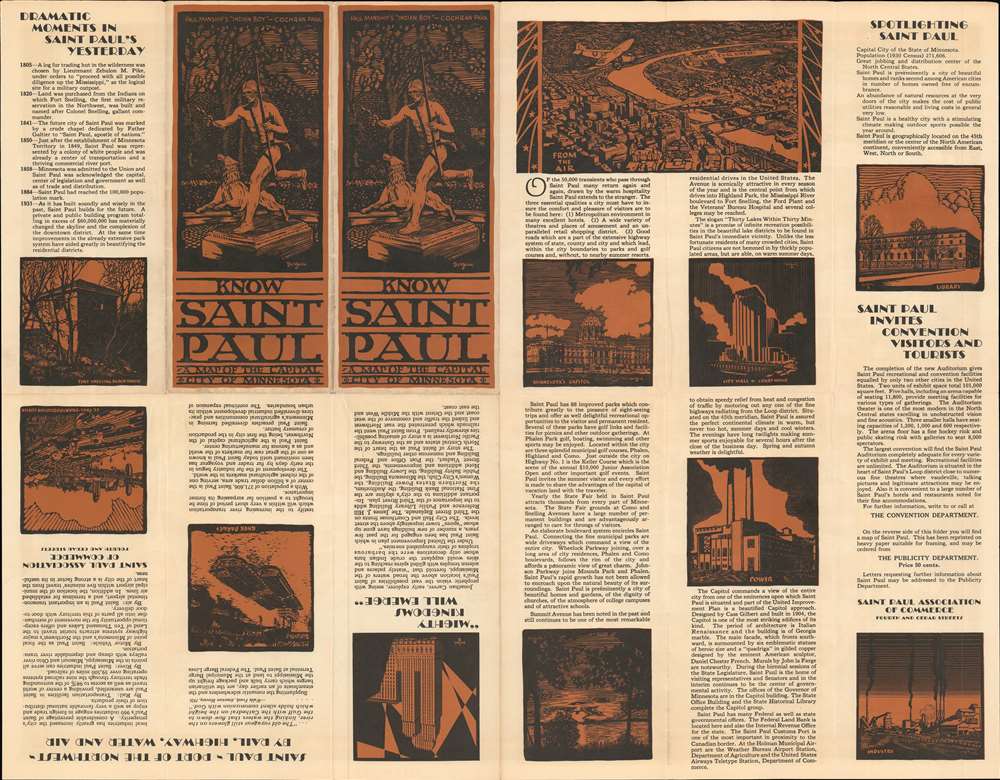 A scarce pictorial city map of Saint Paul, the capital of Minnesota.
$600.00

This is a 1931 Richard H. Burbank pictorial city map or plan of Saint Paul, Minnesota. The map depicts from Minneapolis to Indian Mounds Regional Park and from Wheelock Parkway to South Saint Paul. It is likely that Burbank was inspired by Macdonald Gill's legendary 1914 Wonderground map of London, which this map stylistically resembles. Burbank even hints at this, stating that he composed the map 'in the Old Style for Your Education and Enjoyment'. The yellow streets and the city's buildings drawn in profile all echo Gill's work. Text bubbles appear throughout town, some of which identify landmarks, such as Henry Ford's St. Paul Plant, the State Agricultural College, factory and meatpacking districts, and the Minnesota Freight Transfer, the second largest rail yard in the world. Others include amusing comments, which scattered throughout the work also harken back to Gill. Many of these have educational elements and recall Saint Paul's importance as a railroad and academic hub. The Mississippi River, or 'Ole Man River' flows through town, and separates Saint Paul from Minneapolis and South Saint Paul.

Pictorial qualities have been common in cartography from at least from the 16th century, when publishers like Braun and Hogenberg incorporated view-like qualities and other pictorial elements into their famous city plans. Braun and Hogenberg, and similar cartographers, issued their town books to express, not necessarily the geography of their subjects, but rather the 'essence' of the town/city. As mathematics and surveying principles became more advanced, travel increased, and the ability to translate 2 dimensional cartographic perspectives into an understanding of the actual world became commonplace, maps themselves transformed. This trend is a recognizable progression that evolved cartographic conventions from the 17th to the 19th centuries. By the late 19th century most maps had become geographical tools that illustrated the region cartographically, but failed in the original raison d'être as expressed by Braun and Hogenberg, to illustrate a place's 'essence'. So, where a city map of 19th century Paris might provide a completely navigable presentation of the city, one could glean almost nothing of Paris' character from it. In the late 18th century, the first modern 'pictorial' style maps developed. These maps, like Tomas Lopez's 1788 map of Seville attempted to provide both cartographic accuracy and pictorial elements that might convey the character of the city. In that case, Lopez incorporated pictorial vignettes to illustrate important buildings and monuments. This style became increasingly commonly throughout the 19th century and early 20th centuries, particularly for centers of commerce like London, Paris, and Rome, where they are often mass produced and referred to as 'monumental' maps. The style further evolved in the early to mid-20th century, when revolutionary cartographers and illustrators like MacDonald Gill, Jo Mora, Frank Dorn, Ernest Dudley Chase, and many others, combined vignette style illustrations, modern printing techniques, inspiration from Japanese printmaking and manga, and from clever satirical cartographers/artists like Fred Rose, to produce maps that once again focused on revealing the essence a place, usually, but not always, at the sacrifice of cartographic precision.

This map was created by Richard H. Burbank and published by the Saint Paul Association of Commerce in 1931. Four examples are cataloged in OCLC and are part of the institutional collections at the University of Chicago, the Newberry Library, the Minnesota Historical Society, and the University of Minnesota - Minneapolis. A fifth example is part of the David Rumsey Map Collection. We are also aware of one example in private hands.

Richard H. Burbank (June 2, 1905 - December 28, 1959) was an American advertising executive. Born in Saint Paul, Minnesota, he graduated from St. Paul Central High School. He then entered Carleton College in Northfield, Minnesota. He worked in advertising in Minneapolis and Saint Paul for nearly thirty years and worked with several different firms. He was married to his wife Rae with whom he had three children. Learn More...