1785 Bocage Map or Plan of the Battle of Salamis, Ancient Greece 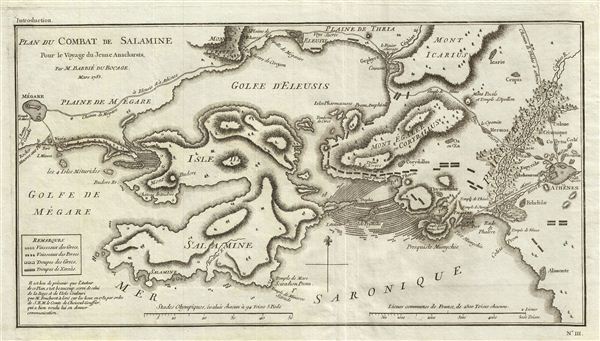 1785 Bocage Map or Plan of the Battle of Salamis, Ancient Greece

This is a fascinating 1785 map of the naval Battle of Salamis fought between the Greeks and the Persians. The map depicts the 480 BC Battle of Salamis, one of the most important conflicts in ancient Greek history. According to the historian Herodotus, the Greek victory at the naval battle of Salamis, in conjunction with another victory at the land battle of Plataea, marked the end of the first Greco-Persian War. The map contains a legend in the lower left quadrant of the map depicting the vessels of the Greeks and the Persians, the Greek troops and the troops of Xerxes. Prepared by M. Barbie de Bocage in 1785 to illustrate the Travels of Anacharsis.