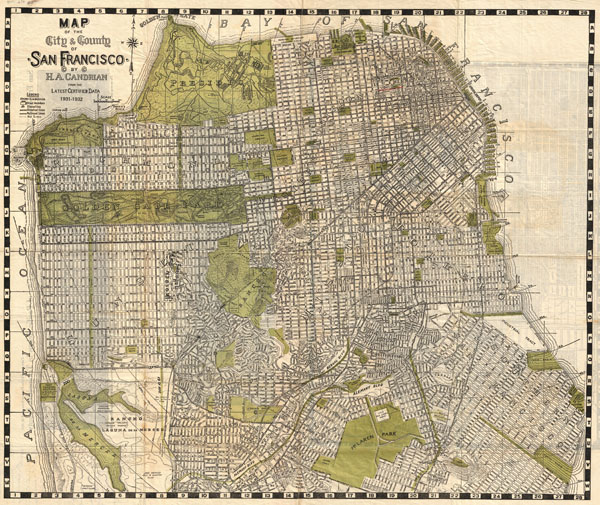 An appealing 1932 art deco style pocket map of San Francisco, California, by H. A. Candrian. Issued just prior to World War II this map covers the city from Presidio Park as far south as McLaren Park and the Laguna de la Merced. The map names all major and minor streets as well as trolley lines, lakes, golf courses, piers, municipal buildings, colleges, and military installations. Parks and public areas are highlighted in green. Surrounded by an art deco segmented border. Title and legend in the upper right quadrant.

Hermon Anton Candrian (March 28, 1852 - November 28, 1928), commonly publishing as H. A. Candrian, was a Swiss-American map publisher active in San Francisco in the first half of the 20th Century. Candrain was born in Bonaduz, Graubünden, Switzerland. It is unclear when he emigrated to the Untied States, but he working as an insurance agent in Seattle around 1900 and by 1905 had relocated to San Francisco. Candrian’s works focus heavily and tourist and railway guides to the city of San Francisco and the general Bay Area. Learn More...

Very good condition. Printed on very thin paper with minor archival repair on verso. Some wear on original fold lines. Additional regional maps and photos on verso. Some manuscript annotations on verso.
Looking for a high-resolution scan of this?