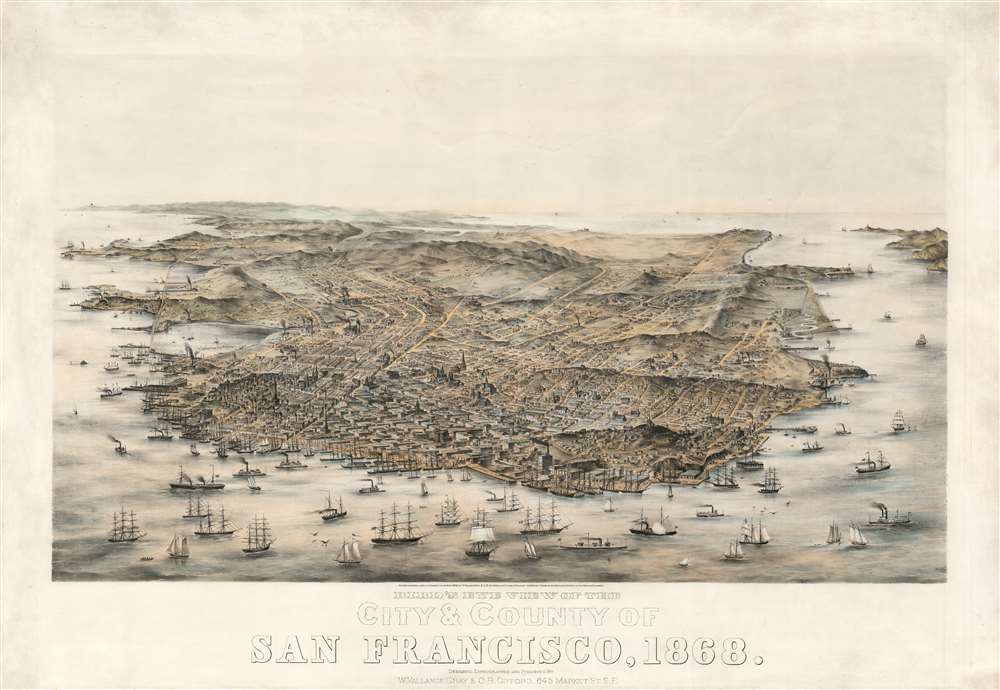 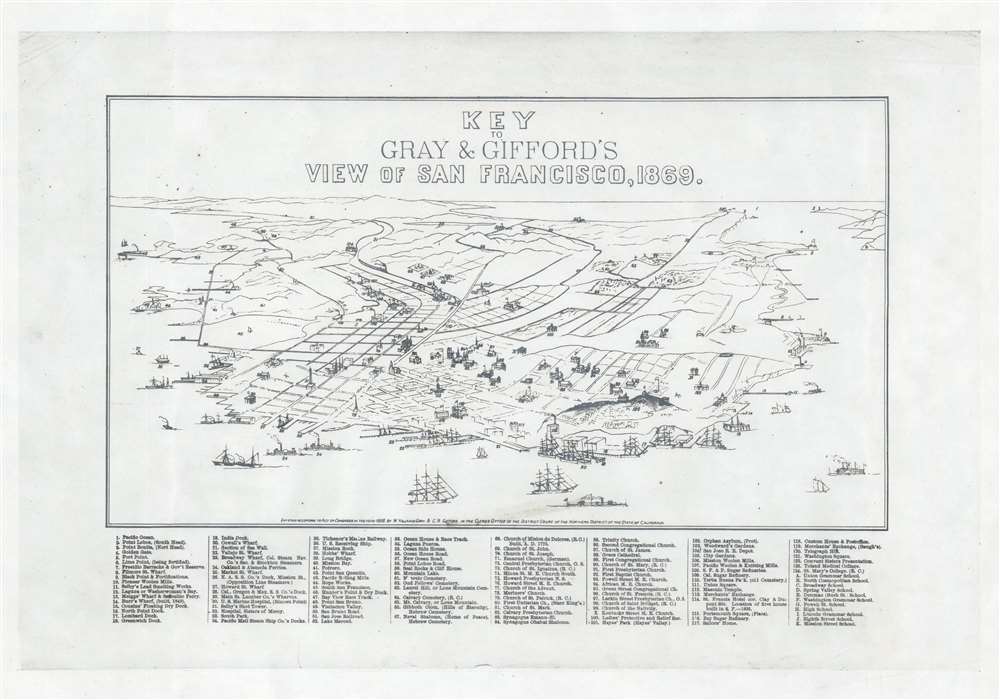 First printing of one of the most significant and desirable views of San Francisco.
$20,000.00

An extraordinary Charles Braddock Gifford and William Vallance Gray 3-color chromolithograph bird's-eye view of San Francisco, California, in 1868 - one of the most desirable and influential views of San Francisco ever produced. The view looks southwest on San Francisco Peninsula from an imaginary highpoint to the northeast. The city and bustling harbor are prominent in the foreground while the peninsula's hills and lakes are in the background. The Golden Gate appears at the upper right, and Telegraph Hill at bottom center.

Chromolithography is a color lithographic technique developed in the mid-19th century. The process involved using multiple lithographic stones, one for each color, to yield a rich composite effect. Oftentimes, the process would start with a black basecoat upon which subsequent colors were layered. Some chromolithographs used 30 or more separate lithographic stones to achieve the desired effect. Chromolithograph color could also be effectively blended for even more dramatic results. The process became extremely popular in the late 19th and early 20th centuries, when it emerged as the dominate method of color printing. The vivid color chromolithography produced made it exceptionally effective for advertising and propaganda imagery, but it could also achieve great subtlety of detail, as is evident here.

This view comes from the private collection of a former vice president of the San Francisco branch of the firm of Balfour, Guthrie and Co., from whom he received it. According to him, the view hung 'for years' in the lobby of the Balfour Building offices of the firm. It is very possible that it hung there from the 1868 inception the import / export firm, which coincided with the year the view was printed.

This rare view is based upon a painting by Charles B. Gifford, and was copyrighted and published in 1868. A second state was printed the same year, and there are three further recorded states of the view from 1869, 1872, and 1873. (5 states are catalogued by Reps.) There are only 7 examples, in various editions, held in institutional collections. The view seldom appears on the market in any state.


William Vallance Gray (September 5, 1839 - October 15, 1891) was a Scottish-American artist, engraver, and lithographer active in San Francisco during the second half of the 19th century. Gray was born in Glasgow, Scotland. He emigrated to the United States sometime around 1860, settling in San Francisco. Gray was naturalized as a U.S. Citizen on October 16, 1868. By 1868 he had partnered in the lithography form of Charles B. Gifford. Gray became prominent for his paintings and views of the American west. He was a member of several fraternal orders, including the Odd Fellows, the Masons, and the Scottish Thistle Club. He is buried in the San Francisco Masonic Cemetery. Learn More...