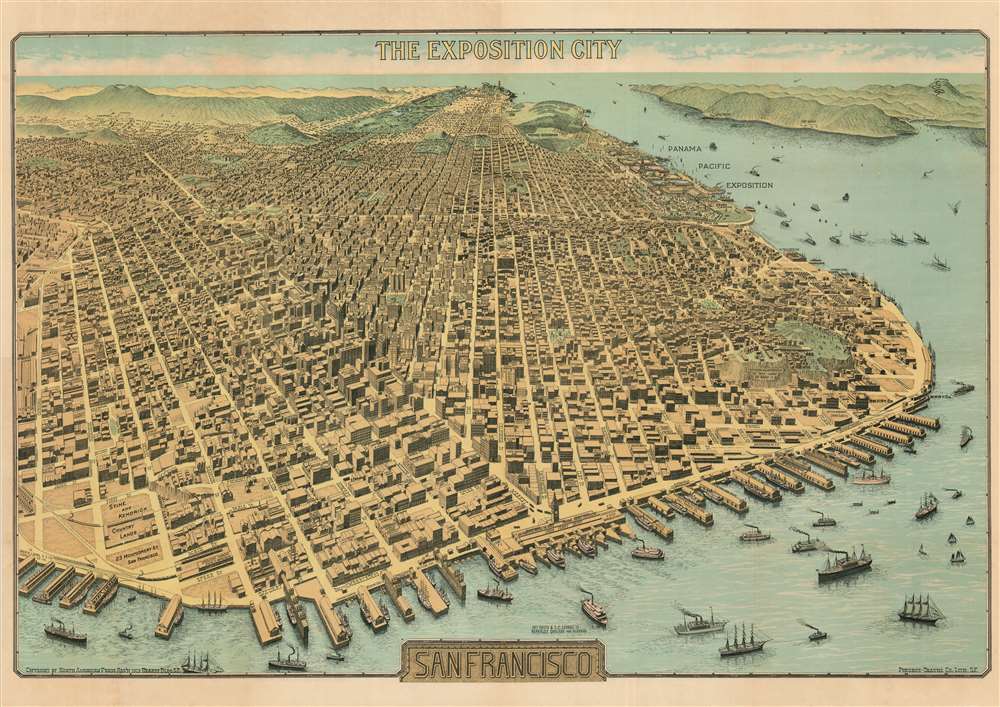 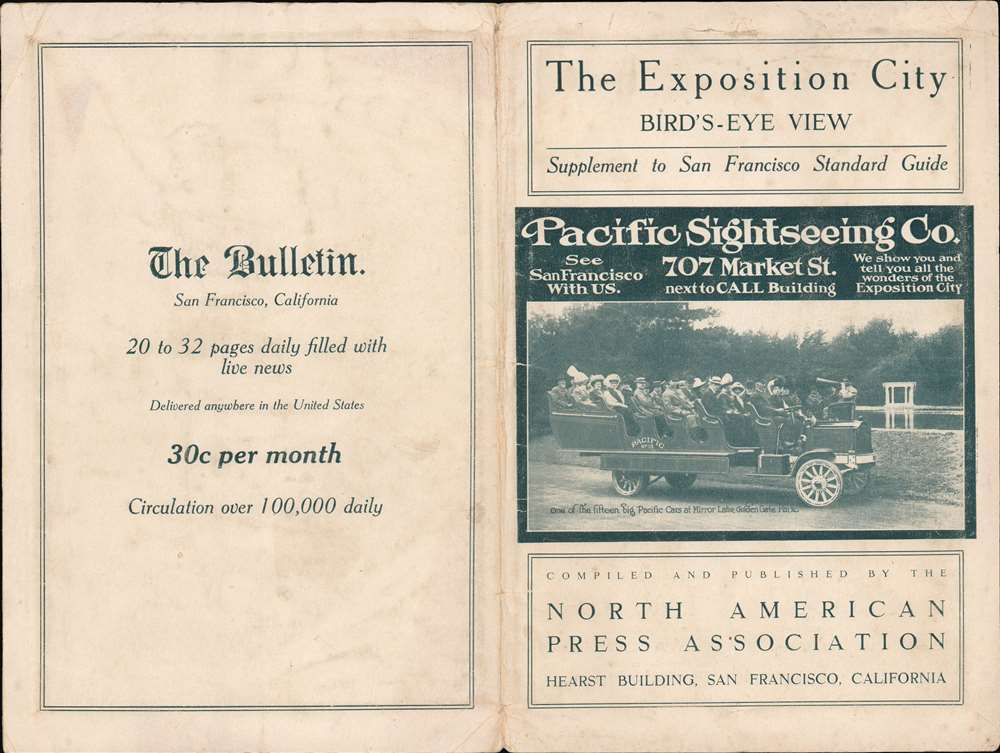 An extraordinary bird's-eye view perspective view and map of San Francisco, risen from the ashes of the 1906 earthquake and fire, ready to retake the world stage by hosting of the Panama-Pacific International Exposition. The view looks westward on San Francisco from a fictional highpoint above today's San Francisco-Oakland Bay Bridge with California Street running dead center. The Embarcadero and docs appear in the foreground, while Golden Gate Park and the Pacific are recognizable in the distance. The Panama-Pacific Exposition, displayed here prospectively, appears at right, near the Golden Gate. Cross the Bay, in the distance, Mount Tamalpais, with a winding road ascending, is recognizable. The view presents a city fully recovered from a disaster that, just six year prior, destroyed 80% of the city. Cartographically the map is noteworthy as it illustrates and names nearly every single building - an astounding achievement and an invaluable record of San Francisco c. 1912.

The Panama-Pacific International Exposition (PPIE) was a world's fair held in San Francisco between February 20 and December 4, 1915. Ostensibly, the fair was intended to celebrate the completion of the Panama Canal, but it was also an opportunity for San Francisco to showcase its remarkable recovery from the 1906 earthquake. The fair was constructed on a 635-acre site (shaded in red) along the northern shore now known as the Marina District. It showcased American industry, progress, and prosperity. The exhibition pièce de resistance was the 'Tower of Jewels', a 435-foot tower covered in glass Novagems illuminated by powerful searchlights. Little remains of the original fair grounds, with the exception of the Palace of Fine Arts - although the current iteration matches the original, it was completely rebuilt in the 1960s to be more permanent and seismic-resistant.

This map was originally produced on June 22, 1912. It was engraved and printed by the Pingree-Traung Company, of San Francisco on behalf of the North American Press Association. While Pingree-Traung was a major printing concern, this map and a guide to several California cities seem to constitute the full corpus of the North American Press Association. It was prepared in anticipate of the Panama-Pacific International Exposition (1915). Examples appear on both thin onion-skin paper, as here, and on heavier stock (per Rumsey). The present map is the second edition, published 2 days after the first on June 24, 1912, is identifiable by the winding road to the summit of Mount Tamalpais, and names of buildings on the block bounded by First, Bryant, Brannon, and Beale streets. A later much-reduced reissue was prepared in 1968 (cf. Rumsey 10016.000) to promote the First Savings and Loan Association. The restrike can be identified by its smaller size, additional promotional text appearing below the title block, and a more turquoise colored bay. Of the present 2nd edition, only one other example, at the Wells Fargo Museum in San Francisco.

Pingree-Traung Company (1911 - 1966) was a lithographic printing firm founded in San Francisco in 1911. The company operated at Battery and Green Streets, under this imprint until 1916 when it was renamed 'Traung Label and Lithography'. The firm specialized in fruit box labels and other commercial lithography and chromolithography. In 1926, they purchased the 'Stecher Lithograph Company' of Rochester, New York (founded 1887), and renamed themselves 'Stecher-Traung'. In 1966, the firm was acquired by International Paper and folded into general operations. Learn More...


North American Press Association (fl. c. 1911 - 1915) was a San Francisco based publishing concern active in the early 20th century. The firm has only 1 recorded copyright entry, a large and dramatic view of San Francisco. However, there is some evidence that they produced fruit-labels, as their advertisements appear in American Fruits as late as 1914. They were based in the Hearst Building. Learn More...