1967 Pictoral Map of San Francisco Epitomizing the Summer of Love 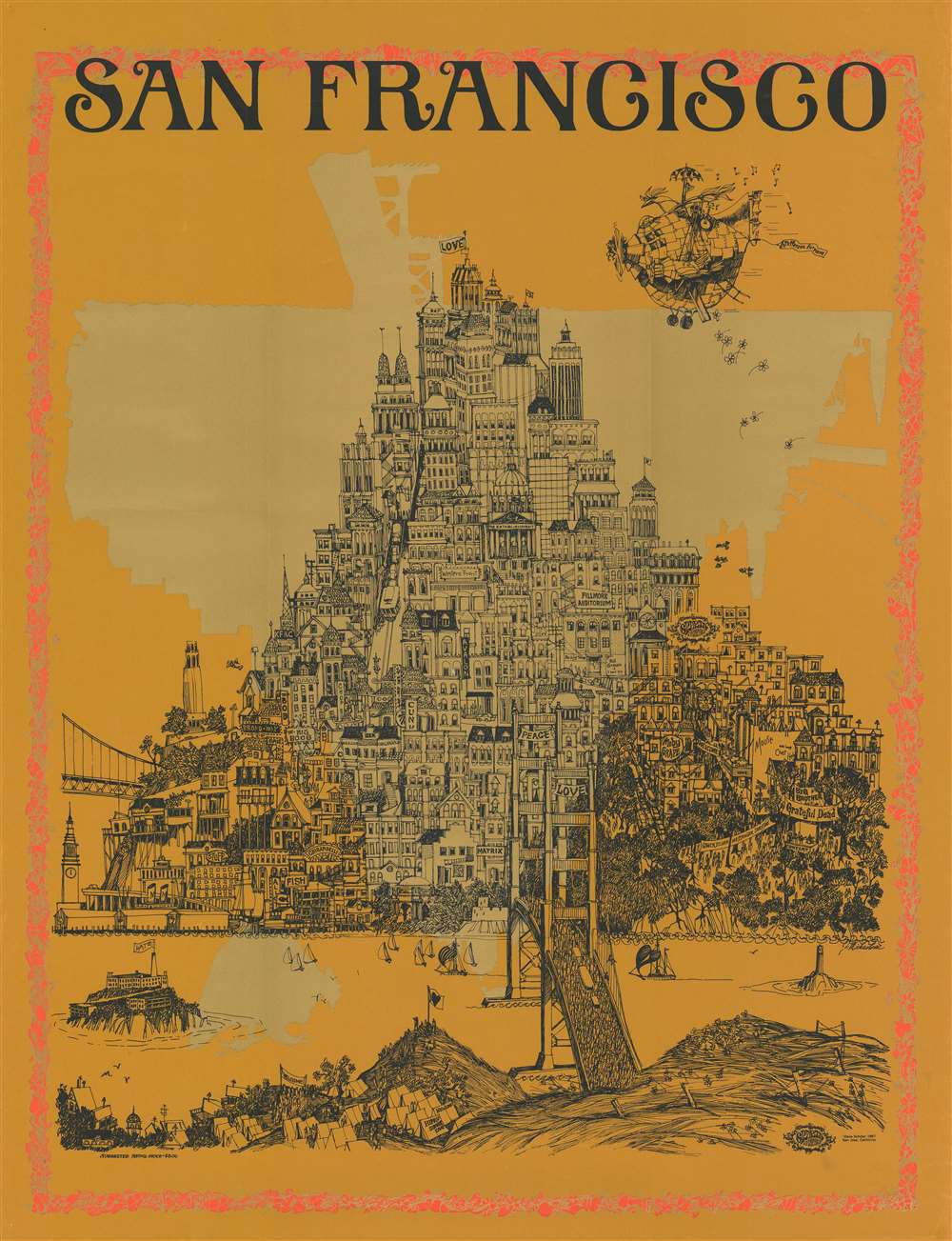 1967 Pictoral Map of San Francisco Epitomizing the Summer of Love

Rare, likely one-of-a-kind erroneous proof of this large, attractive and thoroughly far-out 1967 pictorial map of San Francisco. This engaging and exciting view, screen-printed in red, black, and metallic gold, captures the ideal of city in the midst of the Summer of Love, with particular reference to the music that epitomized the year. This example appears to be a unique survival. The print was executed in three colors. The red and the gold, printed first, are registered properly with each other. The black image, added last, has been printed upside-down in relation to the other colors. The error suggests that this example was a test proof; its survival is a testament to the added psychedelic effect presented by the mismatched colors. The poster has four neat tack-holes, indicating that it was put on the wall, and enjoyed for many years despite (or indeed due to) the errors in its execution.

The city’s hilly layout is ludicrously exaggerated, presenting the viewer with a rambunctious pile of iconic references and insider’s jokes springing up from the foot of the Golden Gate Bridge, topped with a ‘Love’ Banner. The image is richly informed with an insider’s knowledge of the scene, providing the viewer with a wealth of detail. Sausalito, in the foreground, features hillside meadows and a ‘Hippy Summer Camp.’ The bucolic scene ends abruptly with a teeming crowd of pedestrians and buses filling the Golden Gate Bridge (though it is not clear whether this horde is entering or leaving the city.)

The printer of the view, Sparta Graphics, produced many excellent posters on behalf of music promoter Bill Graham and some of the most iconic bands and venues of the era; references to these abound. The Grateful Dead, Family Dog, Big Brother and the Holding Company, Moby Grape, Quicksilver Messenger Service, and Jefferson Airplane are all represented (the lattermost by a ramshackle aircraft, reprised from Schiller and Michaelson’s June 4, 1966 Jefferson Airplane show poster, scattering flowers.) The Fillmore Auditorium, Avalon Ballroom and The Matrix all appear, as does the extremely short-lived Western Front. Personal nods to their (‘Bill Graham is a good guy,’ ‘We love Chet Helms,’) show up postered on buildings and painted on walls; the local radio station (KFRC, The Big 610!) gets a shout out as well. ‘Love’ and ‘Peace’ banners on the bridge and surmounting the city and the Hippy Summer Camp are at sharp odds with the ‘Hate’ flag waving above Alcatraz.

1967: The Summer of Love and Haight-Ashbury

Also called Flower Children, hippies were suspicious of the government, rejected consumerist values, and opposed war. The hippie movement reached its peak in the summer of 1967, called the Summer of Love, when over 100,000 people congregated in San Francisco around the intersection of Haight Street and Ashbury. The small neighborhood could not handle the massive influx. Overcrowding, hunger, drug problems, homelessness, and crime rose precipitously. By the fall of 1867, hippies began to filter out of the neighborhood. Those that remained even held a mock funeral declaring 'The Death of the Hippie.'

This poster was drawn by Jim Michaelson and printed by Dave Schiller of Sparta Graphics in 1967. We aware of examples in private collections but have not identified any in institutional collections. Not in Rumsey.

David Schiller (c. 1945 - ????) was a San José, California music promoter and printer whose printing venture with artist Jim Michaelson, Sparta Graphics, produced posters and album covers for many bands and venues of the San Francisco scene between 1966 and 1968. Learn More...


Jim Michaelson (c. 1945 - May 28, 2019) was a California artist and illustrator who, having made his name with Sparta Graphic’s iconic posters, went on to a long career as a poster maker for Disney Parks. Learn More...