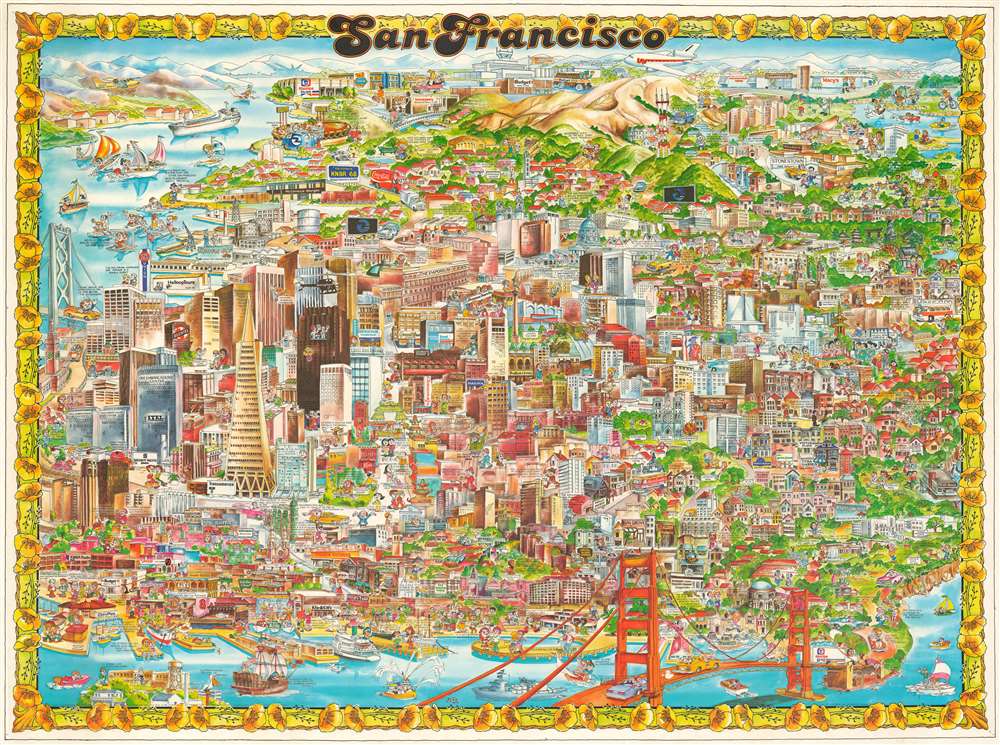 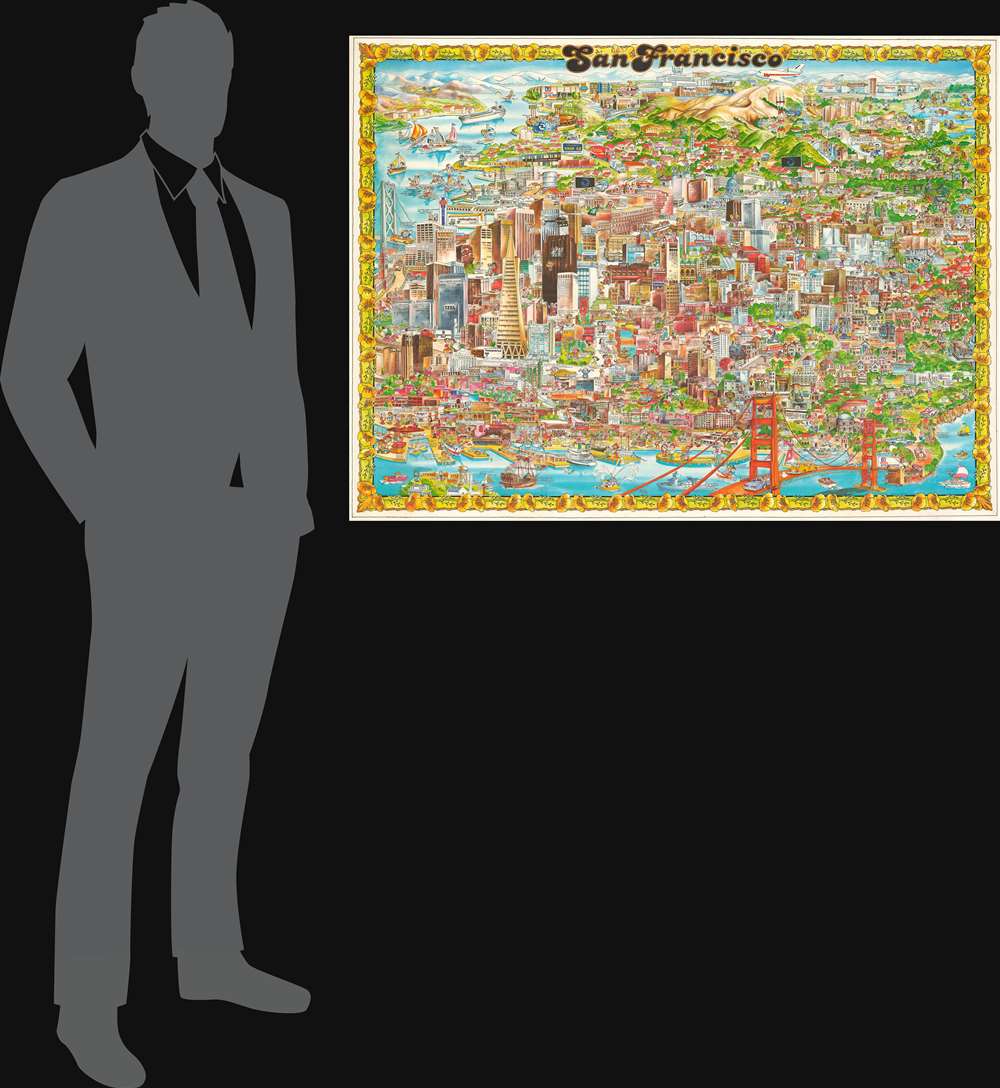 This is a large-scale loosely cartographical 1978 Barbara Spurll 'city character view' map of San Francisco, California. The map looks south on San Francisco, with the Golden Gate Bridge taking pride of place in the foreground. The Presidio marks the farthest point west, and the Bay Bridge, the farthest point east - although the East Bay appears in the distance. The San Francisco International Airport appears in the distance as well. Some of San Francisco's most iconic buildings are evident, including the Transamerica Pyramid, Palace of Fine Arts, City Hall, Grace Cathedral, and the Painted Ladies, among many others. Comparatively dry annotations throughout offer historical facts. The whole is surrounded by a floral border.

City Character Prints issued a series of comical city views between 1972 and 1983. The views combine cartographic perspective with exaggerated illustrations of important landmarks, historical sites, and 'typical' people engaged in 'typical' activities. The views were produced by different artists, with, as far as we can tell, no single artist having produced more than one. Some are unattributed. Cities covered include New Orleans, St. Louis, Birmingham, New York, Syracuse, Philadelphia, Dallas, Buffalo, Chicago, Austin, Washington D.C., Miami, and Phoenix, among others. Most bear the Canadian imprint of Archar Inc., Ontario. Many were later licensed as puzzles. We even note a map of Singapore, dating to 1990, that uses the term 'City Character Print' and while mimicking the style, and also by a Canadian artist, it may or may not be related. The style inspired a whole genre of copycat work of perseverant popularity.

This 'City Character Print' was issued in 1978 by Archar Inc. of Ontario Canada, but copyrighted and printed in the United States. It was illustrated by Barbara Spurll. We have seen other Archar 'City Character Prints', but never San Francisco. It does not appear in Rumsey, but a later edition, copyrighted in 1982, does appear in the U.C. Berkeley Libraries. Extremely scarce to the market.

Barbara Spurll (fl. c. 1972 - present) is a Canadian illustrator, best known for her portraits and children's book illustrations. She grew up in Winnipeg and studied art in Toronto at the New School of Art and the Artists' Workshop at George Brown College. Spurll remains active. Learn More...


Archar / Travel Graphics (1973 - Present) is a Canadian and U.S. publishing company initially based in Toronto, Ontario. The firm is best known for its 'City Character Prints' - cartoonish view style maps intended to express the 'character' of a city. The firm employed a host of in house art directors, as well as a host of freelance illustrators. We find no trace of the company after 1983. Variants of the imprint include 'Archer Western' based in British Columbia and the St. Paul, Minnesota based 'Archar International'. Around 1984, the Minnesota firm was renamed Travel Graphics - Archer International, often printing under the 'Travel Graphics' imprint. Travel Graphics later relocated to Hawaii, where they remain active. Learn More...

Very good. Pin holes in corners (margin only).
Looking for a high-resolution scan of this?