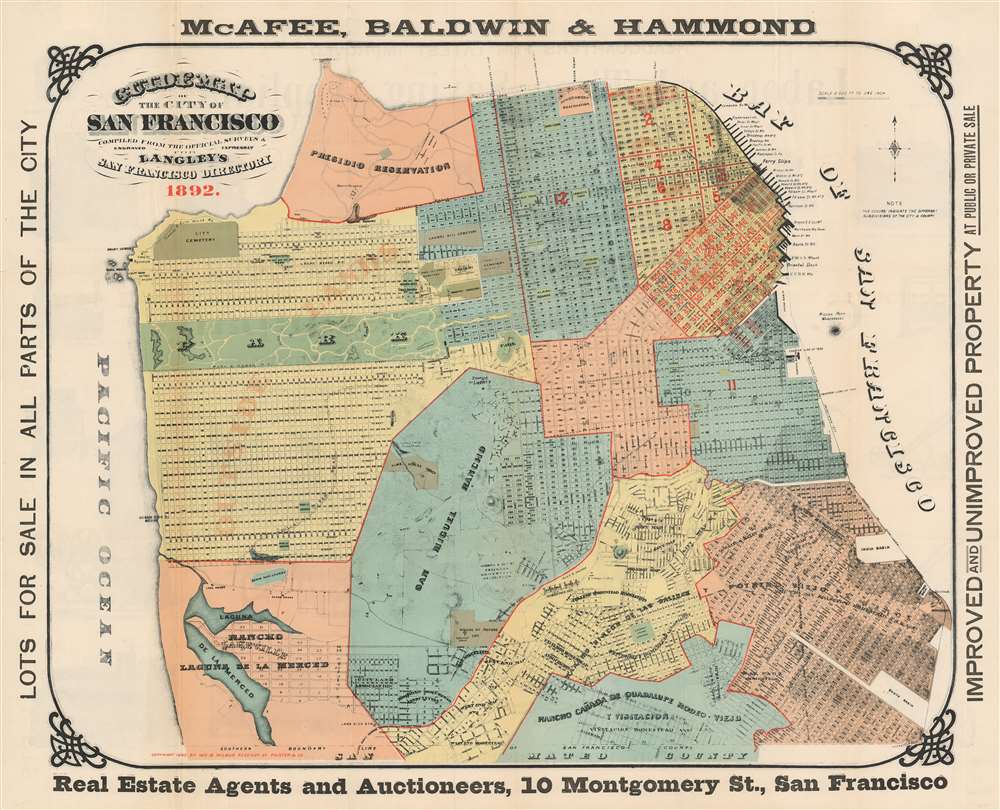 A beautifully produced five-color chromolithograph 1892 map of San Francisco at the end of the 19th century. This map covers all of San Francisco from Lake Merced to the Golden Gate and from the Pacific to San Francisco Bay. Vivid color defines city districts with numbers identifying individual blocks. Various commercial slips and wharves are noted. Red overprinting highlights more active real estate development. The map itself is surrounded by advertising text promoting real estate.

Painter and Company was the publisher of Langley's San Francisco Directory, from about 1874, when Henry G. Langley sold the rights to namesake directory, a longstanding city institution, to Jerome B. Painter (1838 - February 6, 1883) and Theodore P. Painter (1838 - 19??). Before this, the directory had been published by 'Francis and Valentine.' Under Painter, Langley's directory continued to be published, but Painter paid royalties to 'Francis and Valentine' in a legal compromise wherein they agreed not to publish a rival directory under the Langley name. This worked for several years until 1883, when Jerome died and his executers demanded an accounting from the remaining partner, T. B. Painter. T.B. refused and a lawsuit commenced, leading the Supreme Court of San Francisco to appointed George B. Wilbur 'receiver.' This is a custodial legal appointment wherein a third party is put in control of disputed and bankrupt assets while legal issues are resolved. Five years later, 1894, Wilbur found that the firm, long mismanaged, lacked capital to continue publication and so requested permission from the courts to liquidate Painter and Company real estate assets. Annoyed with the receiver, and fearing no directory would be published, three of Painter's descendants, Edgar, Jerome B., and Arthur Painter, allied with 'Francis and Valentine,' created the J. B. Painter Company and began publishing their own, Langley's San Francisco Directory. Wilbur, along with a Walter painter, disputed the new directory claiming that the use of the Langley name was their right alone under the auspices of the 'receivership.' They lost in a subsequent court case and, in December of 1894, Wilbur was removed from receivership and replaced with A. O. Colton. The Langley directly was only published a couple of more years before it partially sold out to Crocker and was published once more, in 1896, as the Crocker-Langley San Francisco Directory.

This map was issued for Henry G Langley's Langley's San Francisco Directory in multiple editions between roughly 1875 and 1894. The map was issued by multiple publishers and the differences between editions are significant, ranging from content, to size, to printing method, to publisher. The present example was created and copyrighted by George B. Wilbur of Painter and Co.

George B. Wilbur (November 1839 - December 21, 1926) was a San Francisco clerk, auditor, and printer. Wilbur was born in Rhode Island and relocated to San Francisco sometime around 1880. In 1884 he was appointed receiver to the firm of Painter and Company by the Superior Court of San Francisco. The receivership was revoked in 1894. Learn More...