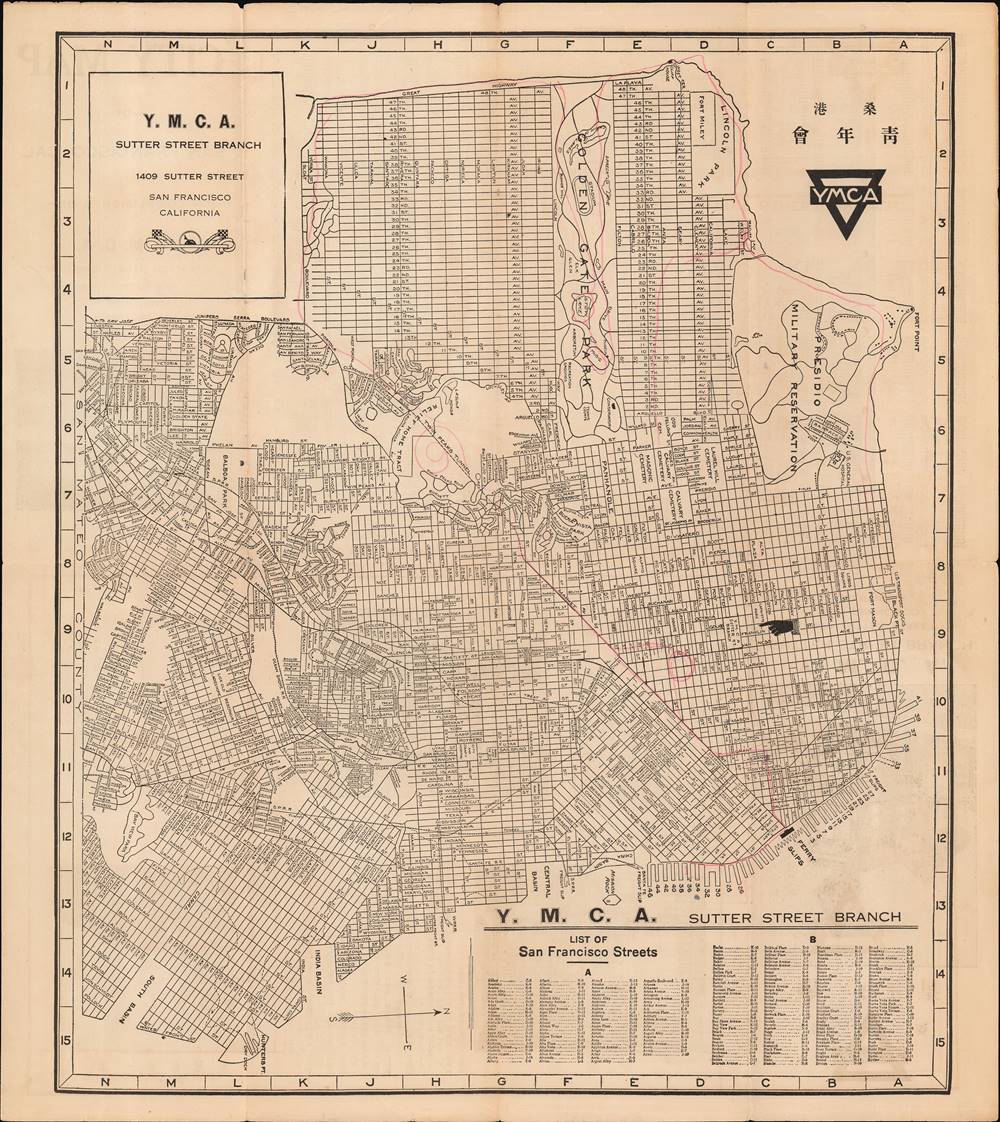 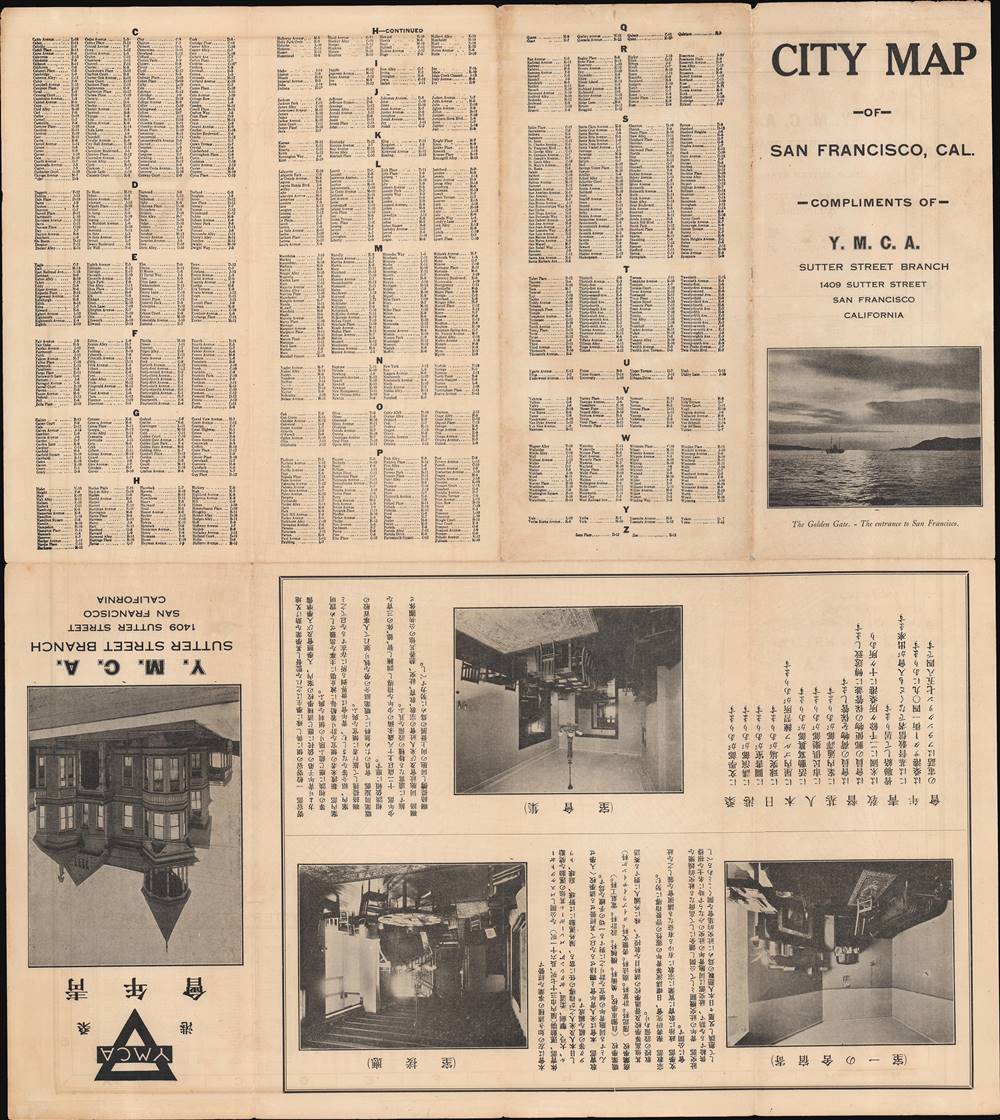 This is a unique c. 1930 bilingual Japanesse/English map and guide to San Francisco, California published by the Japanese Y.M.C.A. (桑港日本人基督教青年會). It shows the city along with grids in the margins and a corresponding list of streets and their locations on the map.

The map is oriented towards the west, with north at right. The location of this branch of the Y.M.C.A. in Japantown, near the intersection of Sutter St. and Van Ness Ave., is clearly indicated. The layout of the city is instantly recognizable, although there have been some notable changes. The group of cemeteries to the north (right) of the panhandle leading into Golden Gate Park near center-right has been developed, largely for the University of San Francisco (which had existed in some form since 1855 but was relaunched in 1930 in its modern form as a full-fledged university).

The Presidio and Fort Miley on the north side of the city are now mostly converted to recreational use. The hilly area to the southwest of Twin Peaks (Mt. Davidson area) has also been converted to housing and commercial use. The railway lines towards bottom-center, belonging to the Southern Pacific Railway and terminating at the former 3rd and Townsend Station (here as 'Sou Pac Railroad Yards'), are now used for the peninsula CalTrain service between San Francisco and San Jose, terminating at a station built in the 1970s at 4th and King. The piers and ferry slips along the Embarcadero and Fisherman's Wharf are also worth noting. These are largely decorative now or used for tourist purposes, but before the construction of the Golden Gate and Bay Bridges, ferries were an essential means of moving around the Bay. Fog and strong currents made the ferry crossings a risky endeavor, and were the cause of several deadly crashes (fictionalized in the opening scene of Jack London's 1904 novel The Sea-Wolf).

The owner of this map took a grand tour of San Francisco, judging by their tracings on the map, from the Embarcadero to Chinatown, to the area near City Hall (built 1915), which is circled, through Twin Peaks and out to Parkside, to the beach at the Great Highway, in and out of Golden Gate Park, through Outer Richmond and what is now Land's End, and two separate paths through Inner Richmond and the Presidio.

The verso (back) has, on one half, a continuation of the road index from the recto (front), and, at bottom, photographs of the exterior and interior of the Y.M.C.A. building at 1409 Sutter St. The text in Japanese explains the internal structure of the organization as well as the activities and services it offered (sports, vocational and commercial training, boarding, etc.). 1409 Sutter St. is no longer home to the Y.M.C.A. - it is now a boutique hotel and the Y.M.C.A. relocated to 1530 Buchanan St, still in Japantown.

In 1913, California passed the Alien Land Law targeting Japanese and other Asian immigrants, prohibiting those not born in the U.S. from owning land (and dispossessing those who already did). A 1920 California law strengthened the 1913 law; both were upheld at the U.S. Supreme Court and only overturned by the California Supreme Court in the 1950s. When California's Japanese-Americans were interned during the Second World War, many lost their homes, businesses, and other property and had to start from scratch after the war. Despite all these obstacles, Japanese-Americans have made an outsize contribution to California's culture and economy, and there are still vibrant Japanese-American communities in Los Angeles, San Jose, San Francisco, and other cities.

This map was published by the Japanese Y.M.C.A. of San Francisco (桑港日本人基督教青年會). Otherwise, no publication information is provided. It likely dates from the late 1920s or early 1930s. It is not known by us to exist in any institutional holdings and has no known history on the market.

Japanese Y.M.C.A. of San Francisco (桑港日本人基督教青年會; fl. c. 1930 - present) is a non-profit organization that was formerly located at 1409 Sutter St. in San Francisco's Japantown, now relocated to 1530 Buchanan St. The Japanese Y.M.C.A. was dedicated in 1936, but seems to have existed for a time prior to this date (the Chinatown Y.M.C.A., also known as the Chinese-American Y.M.C.A., was founded in 1911 and dedicated in 1926). The organization was devoted to serving the growing population of Japanese immigrants who arrived in the late 19th and early 20th century, as well as following generations of Japanese-Americans and travelers from Japan. Learn More...

Very good. Some wear in margins and along original fold lines. Some annotations made by original owner.