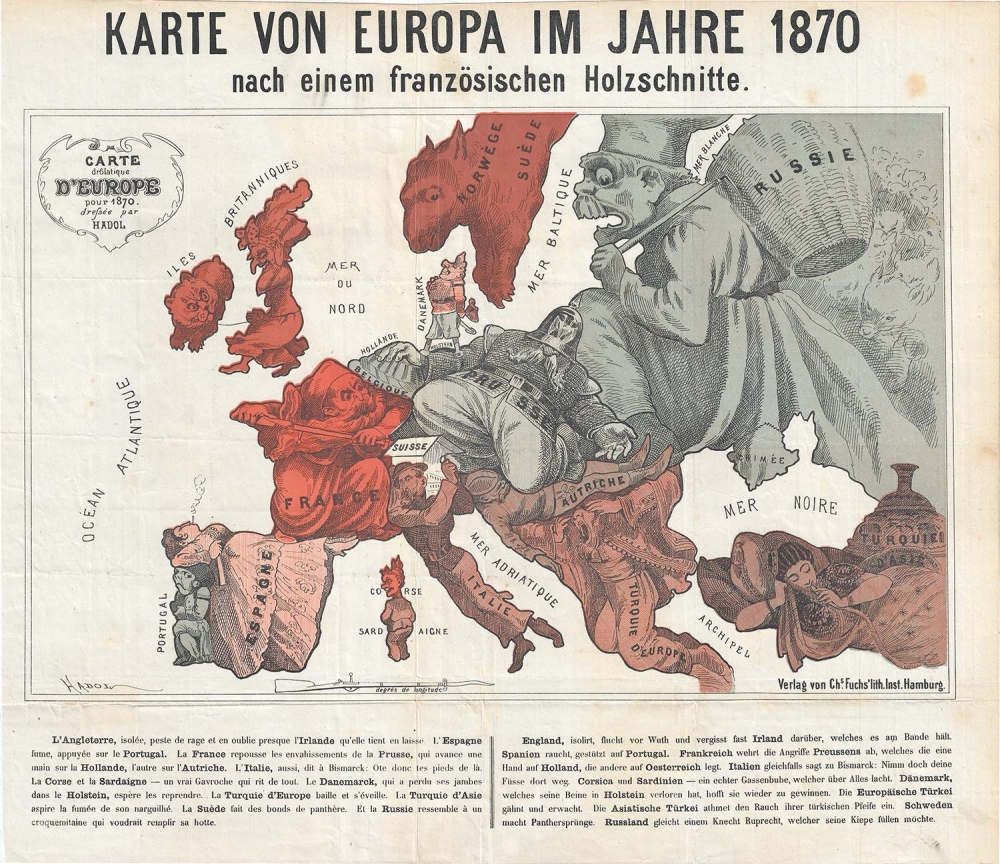 A rare example of the German edition of Paul Hadol's satirical map of Europe on the cusp of the Franco-Prussian War. This map, covering all of Europe, is a comic panorama wherein the individual nations take the telling form of cartoonish personifications. At the center of the conflict are France, represented as a fierce bearded soldier with a bayonet, and Prussia, represented by the bloated body of Otto von Bismarck. The subsequent conflict between France and Prussia resulted in a powerful unified German Empire and a humiliated France – a situation that set the stage for both World War I and II. The original text explanation for the map was in French, which is on the bottom-left of this example, and as this is the German edition, the German translation of the French is on the bottom-right. The French text follows:

ENGLAND , isolated by rabies and plague, has almost forgotten IRELAND who she holds on a leash. SPAIN smokes, leaning on PORTUGAL. FRANCE pushes back against the encroachments of Prussia , [who is] reaching one hand over HOLLAND and the other over AUSTRIA. ITALY, too, says to Bismarck,'Remove your feet.'. CORSICA and SARDINIA…a real Gavroche (a reference to Victor Hugo meaning street urchin) who laughs at everything. DENMARK , who lost his legs in HOLSTEIN, hopes to reacquire them. TURKEY in EUROPE yawns and wakes up. TURKEY in ASIA smokes her hookah. SWEDEN, a panther, leaps. And RUSSIA like a bogeyman who wants to fill its sack.

Satirical or caricature maps existed in Europe from the 14th century (Opicinus de Canestris), but they reached their pinnacle of sophistication in the second half of the 19th century. The genre took the form of humorous political commentary. Some of the earliest 19th century satirical maps, such as Emrik and Binger's and of 1859, merely placed dramatic figures upon the map like giants. As these maps increased in sophistication, the forms of the countries themselves were reimagined as comic figures. One of the first such maps to embrace this new style is Hadol's map of 1870. Subsequent maps by Fred Rose and K. I. Kordig expanded upon and mastered this style. Most such maps were published as independent issues in either pocket map or broadside form, and thus, due to their inherently ephemeral nature, few have survived and are today are all quite rare.

Printed by the Charles Fuchs Lithography Institute in Hamburg. Although this map dates from 1870, the printing most likely dates from 1914.

Paul-Joseph Hadol (February 26, 1835 – November 26, 1875) was a French draftsman, illustrator, and caricaturist active in Paris during the second half of the 19th century. He was born in Remiremont, France, the son of a barrister. Hadol initial took work as a customs officer before relocating to Paris in pursuit of the 'bohemian' life. There he discovered a talent for caricature and draftsmanship, producing comic art for various French periodicals of the period including Le Gaulois, Le Journal Amusant, High Life, Le Charivari, Le Monde comique, La Vie Parisienne and L'Eclipse. In addition, under the pseudonym 'White,' he drafted comic illustrations for Mailly and Baillard. Hadol work is typically associated with the Napoleonic Third Empire. Hadol also published under the pseudonym 'White.' Much of his work was printed in photogravure by the Paris lithographer Firmin Gillot (October 11, 1918 – June 12 – 1872). Learn More...