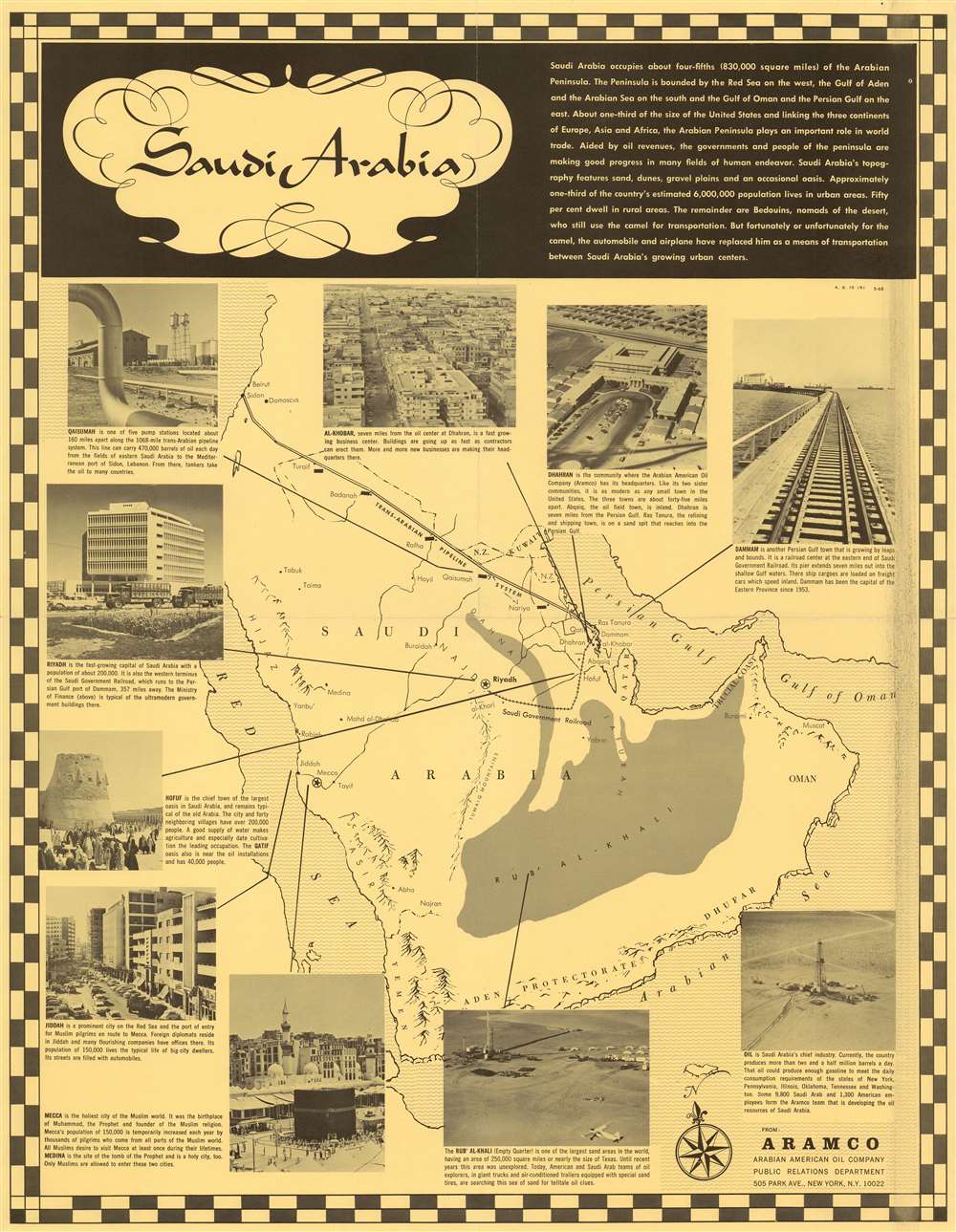 This is a rare, May 1968 map of Saudi Arabia published by the Arabian American Oil Company (Aramco) Public Relations Department. The map was produced to promote business in Saudi Arabia, specifically the Aramco oil business.

The map is a single-color print on colored paper. Its title is presented in a mildly exotic, calligraphic font meant to evoke Arabic script, although the map is entirely in English, revealing its intended audience. The map is text-rich, with descriptions of Saudi Arabia's geography, size, and strides towards modernity. Ten photographic images emphasize both Aramco's infrastructure and Saudi Arabia's urban centers, with their locations pointed out. The text descriptions accompanying the photographs emphasize Aramco as a growing, vital American / Saudi Arabian collaboration. References abound to Saudi Arabia's 'fast growing' capital, its Gulf coast towns 'growing by leaps and bounds' and its 'fast growing business centers.' The presentation overall appears gauged to appeal partially to prospective American investors, but more to prospective American employees.

Geographical features include the Dahna Desert, the massive Rub' Al'Khali, the Tuwaiq Mountains, and the Jafurah Basin. The capital of Riyadh and the holy city of Mecca are marked with a star, while other cities are shown more simply. The government railway connecting Riyadh with Dammam on the Persian Gulf is shown. Most prominently, spanning from the Persian Gulf to Sidon in Lebanon, is the Trans-Arabian Pipeline. Sea areas, and Arabia's coastal highlands are shown pictorially. The map is oriented slightly towards the northeast, as indicated by a fleur de lis compass rose.

National borders are given short shrift. While the coastal border between Saudi Arabia's Asir province and Yemen is shown, there are no borders indicated between Yemen, the Aden Protectorate, Dhofar, or Oman. Kuwait appears with its borders and the Saudi/Kuwaiti neutral zone is illustrated. Although both governments agreed to divide the zone, the signing of the agreement did not take effect until 1970. The diamond-shaped Saudi Arabian - Iraqi neutral zone was not be divided until 1975. The Jordanian border is indistinct. Although the Trans-Arabian Pipeline passes through Syria and Lebanon - and the cities of Beirut, Sidon, and Damascus are shown - the names and borders of those nations are not supplied. Israel is mentioned nowhere, although the Dead Sea and the Sea of Galilee are recognizable. This is particularly interesting given that this map was produced less than a year after the Six-Day War, during which the Golan Heights (through which the Trans Arabian Pipeline ran) came under Israeli control.

We are aware of editions of this map printed in 1959 (University of Utah) and 1961 (University Laval). There are likely other editions, but they have not been catalogued. A smaller, 1955 map of the same title held by the University of Texas at Arlington appears to share many of the same photographic images found on the present example. We see no other examples of the present, 1968 edition, anywhere, nor are there any examples of any edition recorded in the market history.

Arabian American Oil Company (active 1932 - Present) Dhahran-based Aramco (now Saudi Aramco (Arabic: أرامكو السعودية‎ ʾArāmkū s-Saʿūdiyyah) is a Saudi Arabian public petroleum and natural gas company. Initially named California-Arabian Standard Oil Co., it was formed by a coalition of American companies seeking new sources of oil, having been excluded from Mesopotamian oil fields by United Kingdom and France since 1920. In the late forties the company's headquarters were moved from New York to Dhahran, but the company maintained offices in the United States (including the company's P.R. department.) Learn More...

Very good. Single color print on a yellow sheet. Some artifact of the printing process visible inside right-hand border. Original folds; no mends or tears.