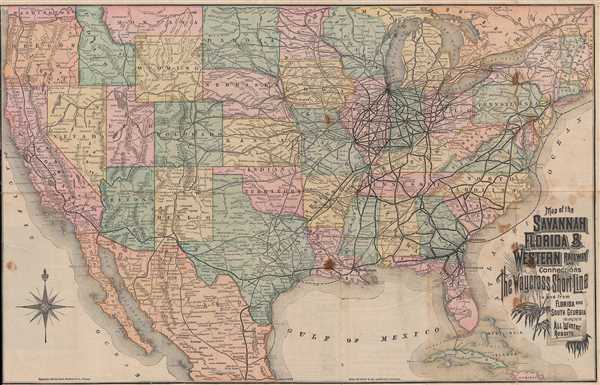 Illustrates in detail the Waycross Short Line which cut travel time from Savannah to Jacksonville in half!

This is very rare 1883 Rand McNally railroad map of the United States. The map depicts the continental United States from the Pacific Ocean to the Atlantic Ocean and from Washington, Idaho, Montana and Ontario and Quebec, Canada to Mexico City and Haiti and the Dominican Republic. The entire rail network crisscrossing the United States is illustrated, but the focus is on the Savannah, Florida and Western Railway and the Waycross Short Line. Every stop along these lines is labeled, unlike the other lines on which only major stops are labeled. Each of the rail lines illustrated on the map is labeled as well, allowing the viewer to locate numerous different railroad companies throughout the continental U.S. Rivers, lakes, and other physical features are also illustrated and labeled.

The Savannah, Florida and Western Railway was founded by Henry B. Plant after he purchased the Atlantic and Gulf Railroad in November 1879 and organized the Savannah, Florida and Western to operate the lines. Plant began construction of the Waycross and Florida Railroad the following year, would run thirty-seven miles from Waycross, Georgia to the Florida state line, where it would join the East Florida Railroad, also owned by Plant, to complete the journey to Jacksonville. Both railroads were built concurrently, and came to be known as the Waycross Short Line. This new line cut the travel time between Savannah and Jacksonville in half. The addition of this shorter route was advantageous because Waycross was emerging as a rail center and Jacksonville was home to important steamship and rail connections. Plant died in 1899, leaving a rail company which operated 568 miles of railroad with 92 locomotives, 136 passenger cars, and 2,257 freight and miscellaneous cars. In 1902, Plant's heirs sold the Plant System of railroads to the Atlantic Coast Line Railroad.

This map was published by Rand, McNally, and Company in 1883. It appears to be extremely rare with no examples identified in the OCLC or in the past 30 yeras of auction records.

Very good. Backed on archival tissue for stability. Light soiling. Text on verso. Left margin trimmed to neatline, as issued.
Looking for a high-resolution scan of this?