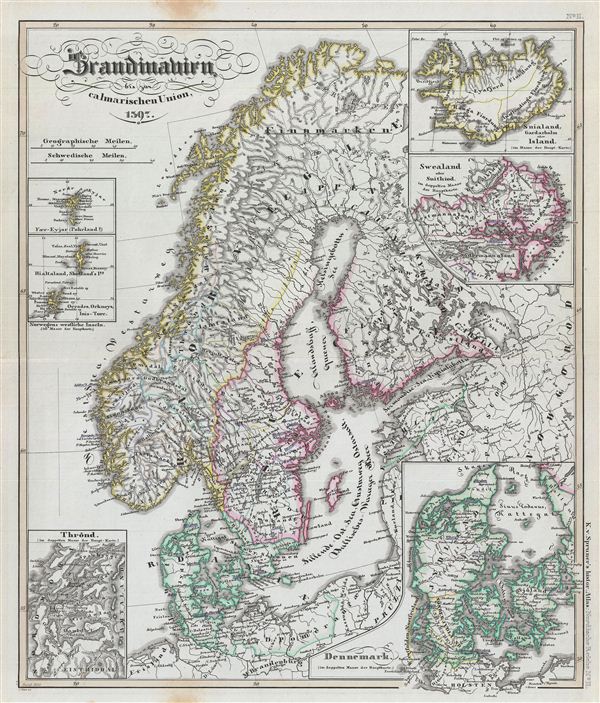 This is a fascinating example of Karl von Spruner's 1855 historical map of Scandinavia during the Kalmar Union of 1397. The map covers Sweden, Norway, Denmark and Finland. The map also features six inset maps detailing Iceland, Swealand, Denmark, Thrond, and Norway's Western Isles. The Kalmar Union consolidated the autonomous nations of Denmark, Norway, and Sweden (including Finland) under a single monarch. The Kalmar Union lasted for over a century in spite of several conflicts during the 1440s. Finally in 1521, Gustav eriksson of the House of Vasa led the Swedish War of Liberation and defeated the leader of the Kalmar Union, Christian II of Denmark. He was elected King of Sweden in 1523 and, by the formal declaration of independence, dissolved the Kalmar Union.

As a whole the map labels important cities, rivers, mountain ranges and other minor topographical detail. Political and regional boundaries are outlined in color. All text is in German. Relief is shown by hachures, and the whole is rendered in finely engraved detail exhibiting throughout the fine craftsmanship for which the Perthes firm is best known. Prepared by Karl Spruner for publication as plate N II in the second edition of Justus Perthes' 1854 Historisch-geographischer Hand-Atlas zur Geschichte der Staaten europa's vom Anfang des Mittelalters bis auf die Neueste Zeit.