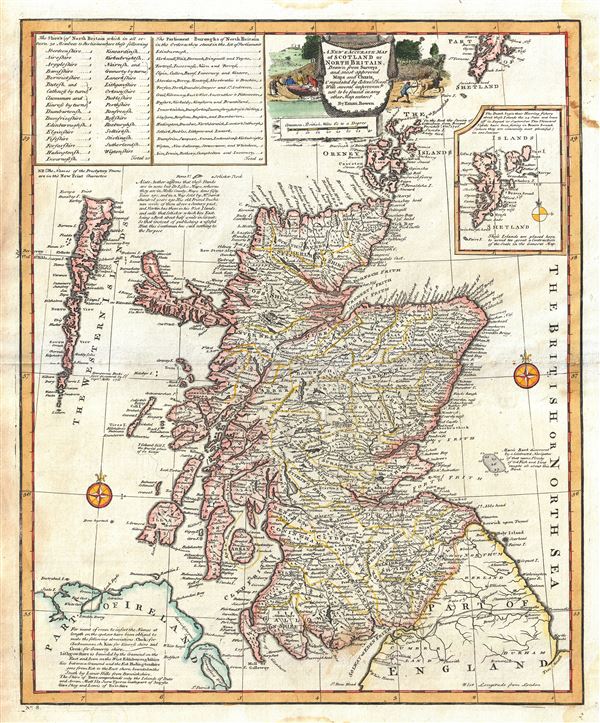 An attractive 1747 map of Scotland or North Britain, by the British cartographer Emanuel Bowen. It covers Scotland including the Western Islands or the Outer Hebrides and the Orkney Islands. The Shetland Islands are featured in an inset along the right border. This extremely detailed map notes important towns, shires, boroughs, cities, roads, etc. River systems are well delineated and forests and topography and rendered in profile. Bowen includes several interesting notes of discovery throughout the map, including 'Marr's Bank discovered by a Celebrated Navigator of that name. Plenty of Cod Fish and Ling caught all about this Bank' and 'Dangerous Rocks first discovered by Capt. Mills 1731.' Another note, 'Y Columb Kill Island the burial place of 60 Kings' most likely refers to the Island of Iona, located few miles off the coast of Mull, Scotland and approximately 80 miles from Ireland. This is where, in 563 BC, St. Columbkille sailed to with 12 companions, and built his monastery. The monastery would go on to become the burial place of all the Scottish kings until the 11th century. A note in the bottom left quadrant of the map explains the compilation of the map, while the upper left quadrant includes a list of Shires and Parliament Buroughs of North Britain. A beautifully illustrated title cartouche depicts scenes of hunting. This map was prepares by Emanuel Bowen as plate no. 8 for the 1747 issue of A Complete System of Geography.