1852 Meyer Map of the Black Sea and Adjacent Countries 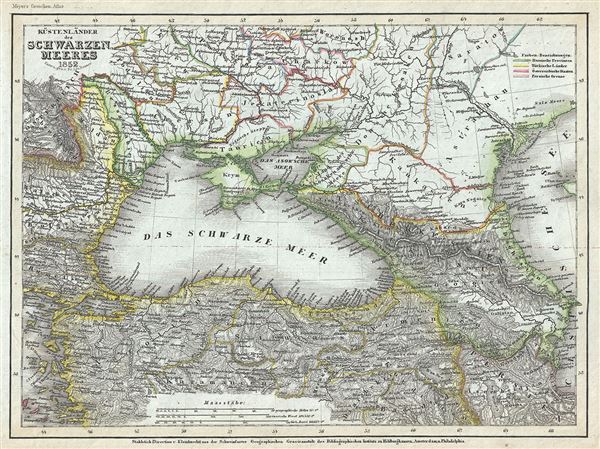 1852 Meyer Map of the Black Sea and Adjacent Countries

This is a scarce 1852 map of the Black Sea and adjacent regions by Joseph Meyer. Centered on the Black Sea, the map focuses on the area immediately surrounding it. Includes parts of what is modern day Ukraine, Moldova, Romania, Bulgaria, Turkey, Georgia, Azerbaijan, Armenia, Iran and Russia. The map is color coded to show Russian, Austrian, Turkish and Persian territories. The map notes numerous cities, rivers, mountain ranges and other topographical features.

This map was engraved by Lieutenant L. Renner and issued in Meyer's Zeitung Atlas. Although all the maps in this atlas are not individually dated, the title page and maps were often updated while the imprint with the date was not, causing confusion to the exact date for some of the maps. Moreover some maps in the atlas were taped in at a later date as an update to the atlas. We have dated the maps in this collection to the best of our ability.

Very good. Minor overall toning and some spotting.
Looking for a high-resolution scan of this?