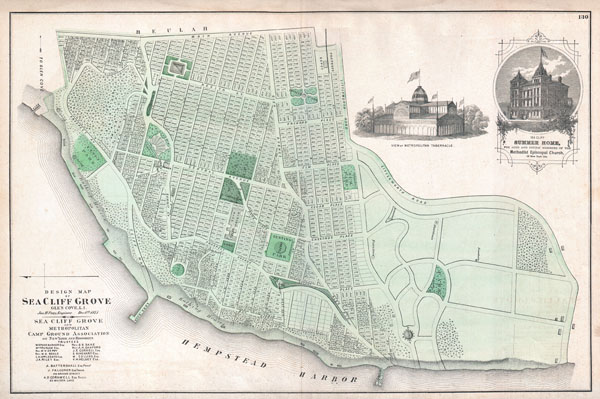 A scarce example of Fredrick W. Beers' map of the Sea Cliff Grove, Long Island, New York. Published in 1873. Sea Cliff Grove, named for the bluff on which it is situated, was founded in the late 19th century as a religious retreat for Methodists from New York City. The Methodists planned the town and built a huge Tabernacle and a home for the elderly and infirm – both of which are depicted as engraved vignettes on this map. This is probably the finest atlas map of Sea Cliff Grove, Long Island, to appear in the 19th century. Prepared by Beers, Comstock & Cline out of their office at 36 Vesey Street, New York City, for inclusion in the first published atlas of Long Island, the 1873 issue of Atlas of Long Island, New York.