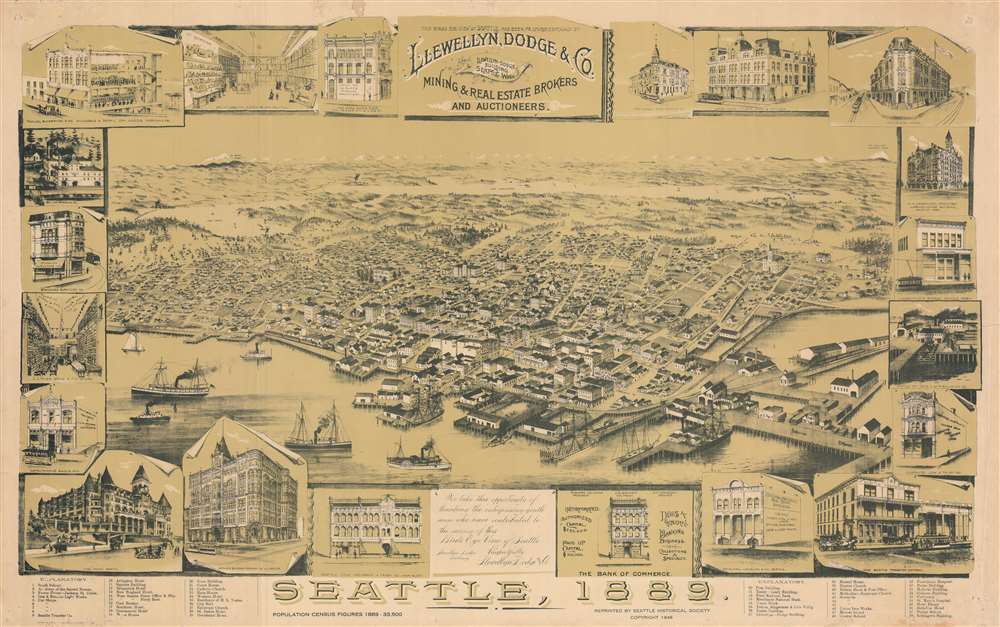 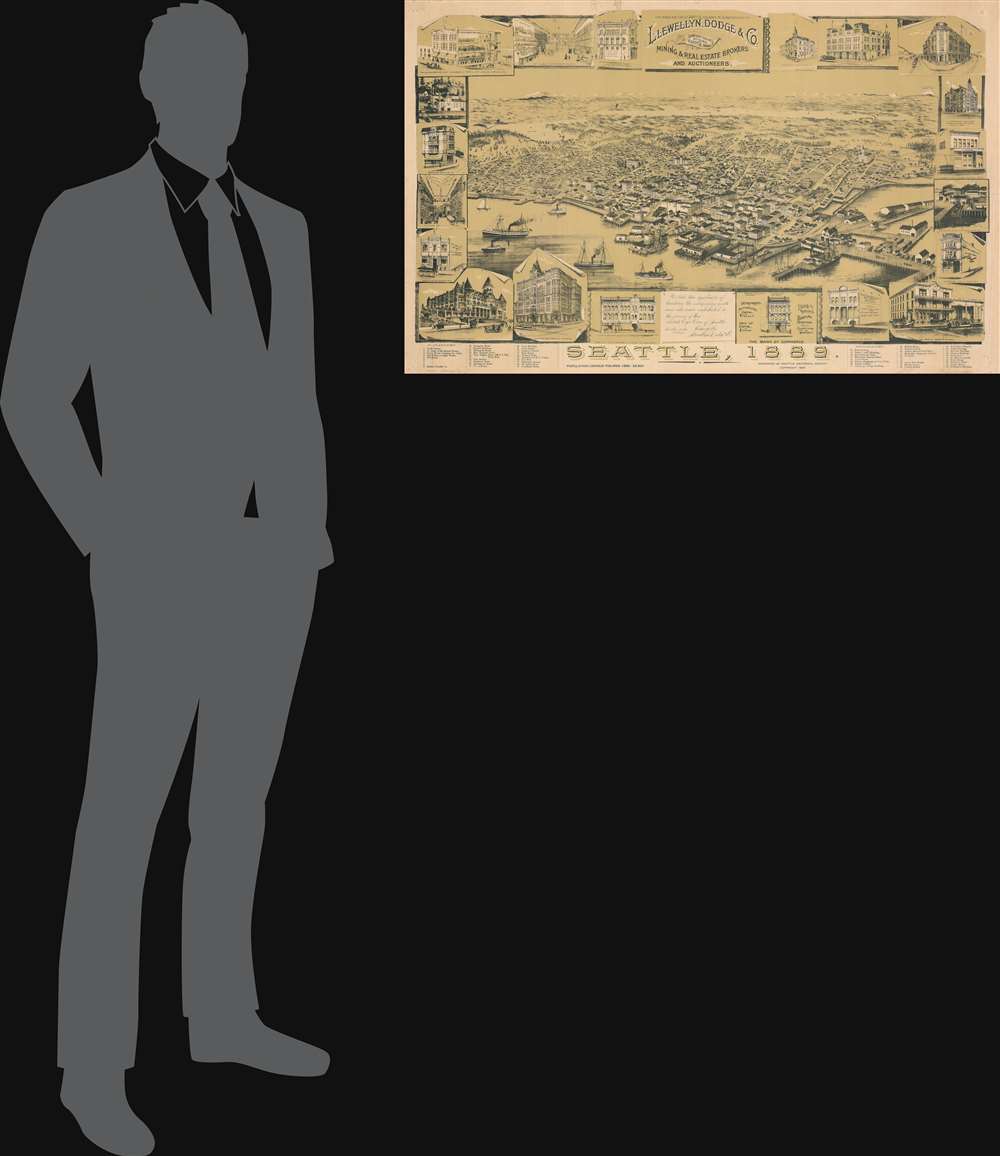 Seattle on the eve of the great fire.

This is an intriguing 1946 bird's-eye view map of Seattle, Washington, published by the Seattle Historical Society based on an earlier view published in 1889 by Llewellyn, Dodge and Co. It illustrates the city as it stood in 1889, the same year a great fire destroyed many of the structures seen here (also the same year Washington entered the Union).

This view is oriented towards the east, with Lakes Union and Washington, Snoqualmie, and Mounts Baker and Rainier noted in the distance. It depicts the main part of Seattle with its waterfront. Numbers correspond to an index of important buildings and sites at bottom, and several of the indicated buildings are illustrated in vignettes surrounding the main view.

The layout of the city is easily recognizable, and most streets today retain the names presented here. The predecessors to Seattle's distinctive streetcars ('electric railways') appear on Jackson and 2nd Streets, and are depicted in several illustrations, including one at left where a car passes in front of the Llewellyn-Dodge Building on 2nd St. The 'University' towards the left (north) was the original location of the University of Washington, which relocated in the following years to Union Bay, across Lake Union from the main part of the city

Two railways are present at right (south): the Columbia, Puget Sound, and North Pacific Railway, and the Seattle, Lake Shore and Eastern Railway. Both had recently begun operations following a decade of attempts to link Seattle with a wider rail network, including transcontinental service. These waterfront railroad tracks were later moved underground to relieve congestion and the resulting street was afterwards known as Railroad Avenue, now the Alaskan Way, a major commercial and tourist thoroughfare (a highway viaduct constructed in the 1950s along the same route was demolished in 2019, also replaced by an underground tunnel).

Both the initial publication and the present second printing were part of a chain of 'memory making' among Seattle's elite, which sought to celebrate the early pioneer families who established the city, most of whom became wealthy through early business ventures and by selling their land to later settlers. These commemoration efforts began at the end of the 19th century, only two generations after the initial arrival of settlers to the area (the Denny Party in 1851), and centered around 'Founder's Day' parties, which eventually led to the creation of the Seattle Historical Society.

The Great Seattle Fire and Reconstruction

Most of the structures here were destroyed in June 1889 by a large fire, one of several that occurred in Washington during an especially dry summer. The dry conditions, the lack of a proper fire department, and an inadequate water supply, and bad luck contributed to the fire's spread. It began in a carpenter's shop (at the intersection of Madison and Front St.) loaded with wood chips and turpentine and quickly grew to consume a nearby liquor store, igniting the spirits and causing the fire to spread even faster. With luck, the fire occurred during the afternoon, allowing residents to escape. Only one person died, although much of the city was destroyed. The fire also killed off most of the rats that plagued the city in its earlier years. Seattle was rebuilt on the same plan, but with brick instead of wood. The post-fire reconstruction, along with the arrival of the railways mentioned above and the Klondike gold rush, all contributed to explosive growth at the turn of the 20th century.

This view was published in 1946 by the Seattle Historical Society, making use of an 1889 view published by the Llewellyn-Dodge Company. Only two examples of the 1889 edition (OCLC 19689388) are known to exist, held by the University of California Berkeley and Yale University, while eight institutions hold the 1946 edition. This view is very scarce to the market.

Seattle Historical Society (c. 1911 - present), later the Seattle-King County Historical Society and now the Museum of History and Industry, is an organization dedicated to preserving the heritage of the Seattle and greater Puget Sound region. Its historical development was complex and the organization went through several phases while continuously building a collection of materials and artifacts relevant to local history. In 2012, the organization (by then existing as Museum of History and Industry) opened a new location in the remodeled Naval Reserve Armory in the South Lake Union neighborhood of Seattle. Learn More...


National Lithograph Co. (c. 1895 - 1963) was a map publisher based in Detroit that specialized in producing maps of Detroit and other Michigan cities. Learn More...

Good. Fold line visible at left. Some wear in margins and earlier repairs, including a tear at right-center and holes made for hanging at top-left and top-right.