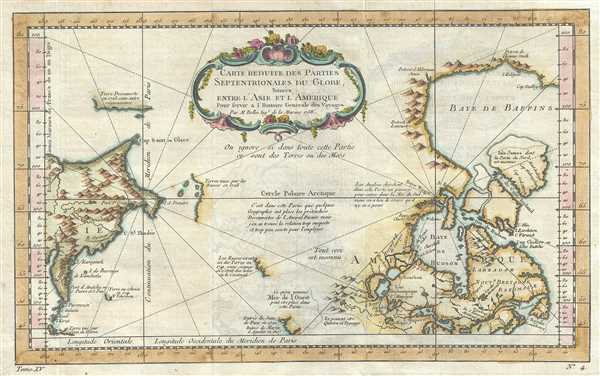 This fascinating 1758 hand colored map by French cartographer Jacques-Nicholas Bellin features the northernmost part of North America and Asia focusing on the Canadian Arctic and the easternmost part of Siberia, including Kamchatka. The map extends from Baffin Bay south as far as Lake Huron. Throughout Bellin includes annotations and references explorations and discoveries of notable navigators including Juan de Fuca, Martin d’Augilar and Russian discoveries including those of Vitus Bering in 1741. As much attention as Bellin lavished on the Hudson Bay, this map's compelling cartography appears in the west. Much of the North American cartography here is speculative, and includes the 'Mer de L'Ouest’ and a barely delineated coast of Alaska as ‘Land seen by the Russians in 1728’. As we continue this description we will go over these cartographic anomalies in detail.

Entrances to the apocryphal sea called ‘The Sea of the West’ are noted for both Martin d'Aguilar, who charted a 'swift flowing river' (the Columbia River?), and Juan de Fuca (the modern day Strait of Juan de Fuca) are noted near the bottom of the map. This body of water, alternatively called the Sea of the West or Mer de l'Ouest, was speculated by Philippe Buache and De l'Isle in the early 18th century based upon wishful thinking, American Indian stories, and the somewhat questionable 16th century explorations of Juan de Fuca. Just southwest of the unmapped Sea of the West, Bellin points out the dubious existence of Quiviara and Teguayo, mythical undiscovered cities of gold sought since the days of the Conquistadores.

Moving west, Bellin notes a peculiar landmass in the North Atlantic just east of Kamchatka sighted in 1741 by Tchirikow. This might be considered a proto-form of Muller's Peninsula. It was based upon sightings of the Aleutian Islands by Vitus Bering on his first voyage in 1725 and an actual landing by Tchirikow (Aleksei Ilyich Chirikov). Tchirikow sighted many of the Aleutian Islands on his 1741 voyage, but landed only once.

Further west, near the edge of the map, Bellin notes the ‘Land seen by Juan de Gama’. Gama or Gamaland was supposedly discovered in the 17th century by a mysterious figure known as Jean de Gama. Various subsequent navigators claim to have seen this land, but it was left to Bering to finally debunk the myth. In 1729, he sailed for three days looking for Juan de Gama land but never found it. Gama remained on maps for about 50 years following Bering's explorations until the explorations of Cook confirmed the Bering findings.

A note below the title states that it is ‘unknown whether this area is land or sea’. Overall a fascinating map of the pacific northwest. This map was drawn by Jacques Nicolas Bellin and published as plate no. 4 in volume 9 of the 1758 French edition of Abbe Provost's L'Histoire Generale des Voyages.

Toronto Public Library, Toronto Reference Library, 912.98 B25 small.
Looking for a high-resolution scan of this?