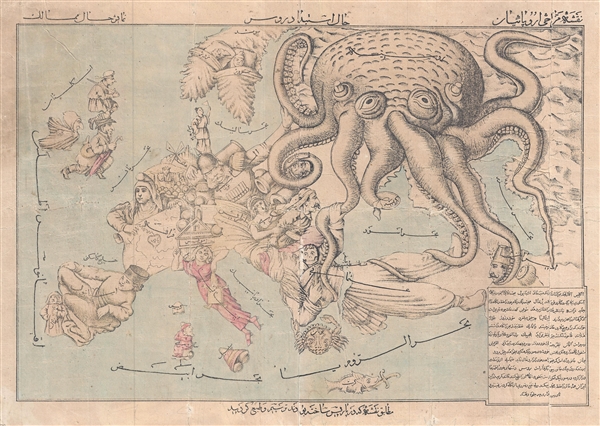 Rare Persian langauge variant of the Fred Rose 'Octopus Map' of Euopre. One of only 2 known examples.

A very rare c. 1880 Persian version of Englishman Fred Rose's iconic 1877 Serio Comic War Map, in which expansionist Imperial Russia is analogized as a menacing grasping octopus. Iranians at this time were beset by incursions from both Western Europe, in terms of increased English activity in southwestern Iran, and Russian political penetration in the form of strong inter-dependent alliances with the Qajar elite. The Qajar also borrowed substantially from both England and Russia, creating a deep network of financial ties. This was issued to illustrate and satirize conflicting perspectives for the educated Iranian public.

The map illustrates Rose's response to the Balkan Crises of 1877, wherein British interests were perceived to be under threat from the expansionistic zeal of the Russian Tsar.

In Rose's own words:

The Octopus (Russia, the great glutton) no longer thinks about the wounds received during the Crimean War, and advances its armies in all directions. After having stemmed the Turk’s advance, the Russian marches forward, hoping to crush Turkey like he did with Poland. It seems Greece is also desirous to occupy and exhaust Turkey from another direction. Hungary is restrained only by its sister Austria from attacking Russia. France, still smarting from its recent defeat, is studiously inspecting its arsenal. Germany is observing France’s movements, and is prepared for all eventualities. Great Britain and Ireland are carefully monitoring the situation, and are prepared to prevent Russia from imposing itself on Turkey, or interfering in the Suez. Spain is taking a much-needed nap. Italy is toying with the Pope, while the rich King of the Belgians is securing his treasure. Denmark may have a small flag, but it has reasons to be proud.

After reading Rose's description above, as printed on the first 1877 version of the map, published by Bacon, the careful observe will note several difference in this, our Persian variant. France, which in Rose's version, is Marshal MacMahon pointing a mitrailleuse towards Germany, is here a monk holding a scroll on which is a heart and text, which reads, in roughly translation from Farsi, 'Paris is the heart of the world and everyone wishes to be there' - suggestive of a strong Iranian affinity towards France. This somewhat undermines' Germany's position, which in the Rose map has its attention on France, but here, looks eastward towards Russia. Norway in Sweden, which Rose largely ignores, are here represented as happy sleeping babes. Sicily, which Rose drew as three wine barrels, here takes on a form that is rather hard to identify.

Fortunately there is textual description in Farsi to make all clear:Farsi text at the bottom reads 'Replica of a map which was published and illustrated in Paris.' This may account for some of the differences, especially as regards the pro-France illustration, but we have not been able to identify said 'French' variant. The title, at top reads, 'Comic Map of Europe.'

To be fair, although Rose popularized the convention of representing the Russia as a menacing octopus, it was in fact the Dutchman J. J. Van Brederode in 1870, who produced the first version of this map, the Humoristische-oorlogskaart. The convention of representing Russia as an octopus afterwards became extremely popular and was adopted by other caricaturists in Japan, Iran (as here), and elsewhere.

Our research suggests that this is one of only 2 known examples, with no other examples in evidence in either public or private collections. A once in a lifetime discovery.