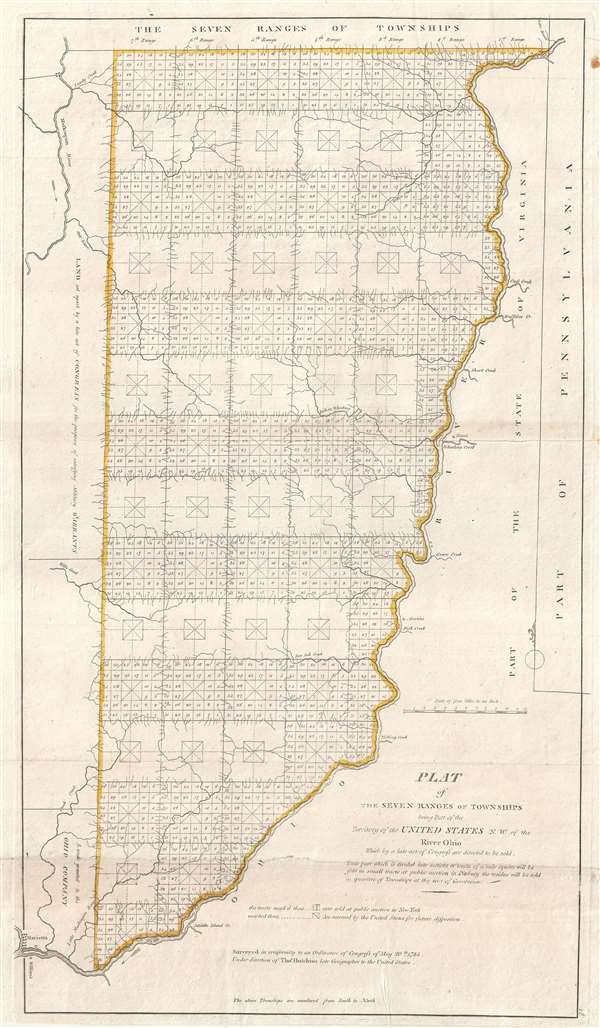 Very few printed pieces are of more importance in the history of Ohio than this survey of a part of the future state. – 'Fifty Ohio Rarities,' Clements Library.

This is considered by some to be the map that began the opening of the American west and established the groundwork for the American westward expansion. It was initially published on September 30 of 1786 and is the first map published under the Land Ordinance of 1785. Surveyed by Thomas Hutchins and others, this map breaks down the lands to the west of the Ohio River from the Pennsylvania Border to Marietta, which part of the western border of the map has been omitted to accommodate.

The Land Ordinance of 1785, passed on May 20 of 1785, established the groundwork by which settlers could purchase land in the American west. It gave the Federal government the exclusive right to sell land in the new acquired western lands, centralizing political power in the new territories, and providing an opportunity for the government to recoup debts taken on during the American Revolutionary War. Part of the Ordinance called for the establishment of Public Land Survey, a job that fell to Hutchins, who was the first and only person to hold the title of 'Geographer of the United States.'

Hutchins established the 'Ranges and Township' protocol by which much of the American West, excepting only those lands along the Mississippi and in the southwest that had previously established land allotments dating to the French and Spanish periods. His work placed an indelible stamp on the geography of the growing United States in terms of the strict grid structure evident in most states west of the original colonies. Anyone flying over the American Midwest today can see the results of the protocol he established.

Despite his influence, Hutchins only surveyed four of the ranges evident on this map. These he completed with great difficulty over many years, as the local American Indian nations were not friendly to Hutchins' survey teams and the subsequent settlement they represented. After Hutchins died in 1789, additional teams were sent under military escort to complete surveys of the final three ranges.

In the southwest quadrant of this map, the lands of the Ohio Company embrace the northern shore of the Ohio River between Marietta and the Grand Sandy River. The Ohio Company was a land speculation company based in Virginia. Their royal charter was granted in 1749. Settlement did ensue, but was not as profitable as might have been imagined. After the American Revolutionary War and the passing of the 1787 Northwest Ordinance, the Ohio Company lands became a district of the Northwest Territory.

Thomas Hutchins (1730 – April 18, 1789) was an American military engineer, surveyor, and cartographer active in the second half of the 18th century. Hutchins was born in Monmouth County, New Jersey and joined the British Army as an ensign at 16. He fought with distinction in the French and Indian War. In 1766 Hutchins began working as a military engineer on a Ohio River survey expedition. He later completed additional river surveys throughout the Midwest and in the Florida Panhandle. Hutchins was rumored to have been involved in several land schemes in the lands acquired from France by the 1763 Treaty of Paris, but there is no tangible evidence of such. When the American Revolutionary War broke out he found himself sympathizing with the Continental cause and defected, the only Regular British Officer to do so. After the war, he was appointed 'Geographer of the United States,' the first and only person to have ever held this post. The completed several important surveys in Ohio and laid down the groundwork for the plat system, by which the American west would eventually be parceled according to a regular grid structure and sold. Hutchins influence on the geography of American is therefore staggering, evident in the country structure of most American lands west of the Ohio River, and easily visible from the air. Hutchins died on assignment while surveying the Seven Ranges, Ohio, the first map to follow the Ordinance of 1785. He is interred at the cemetery of the First Presbyterian Church of Pittsburgh. Learn More...