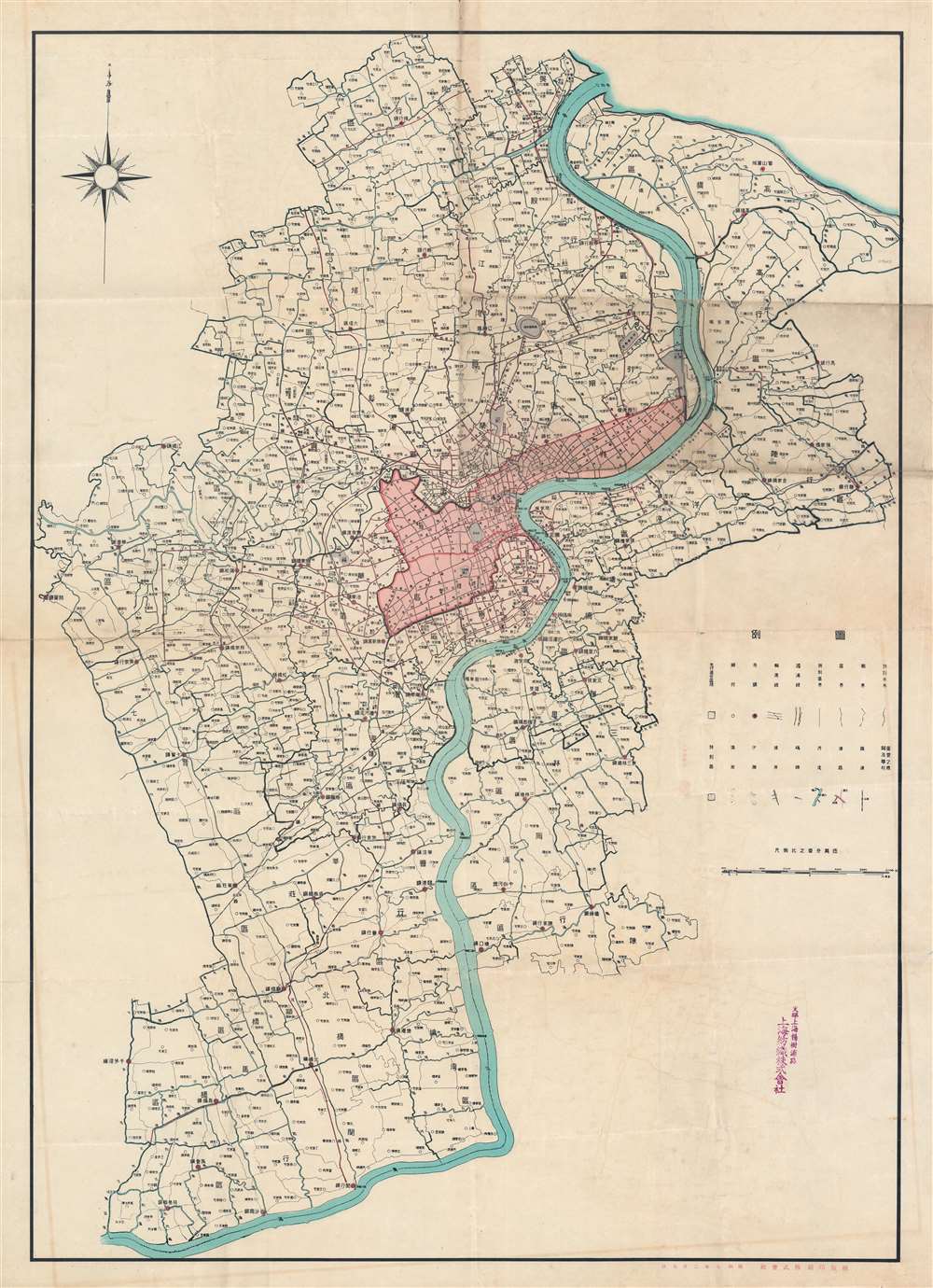 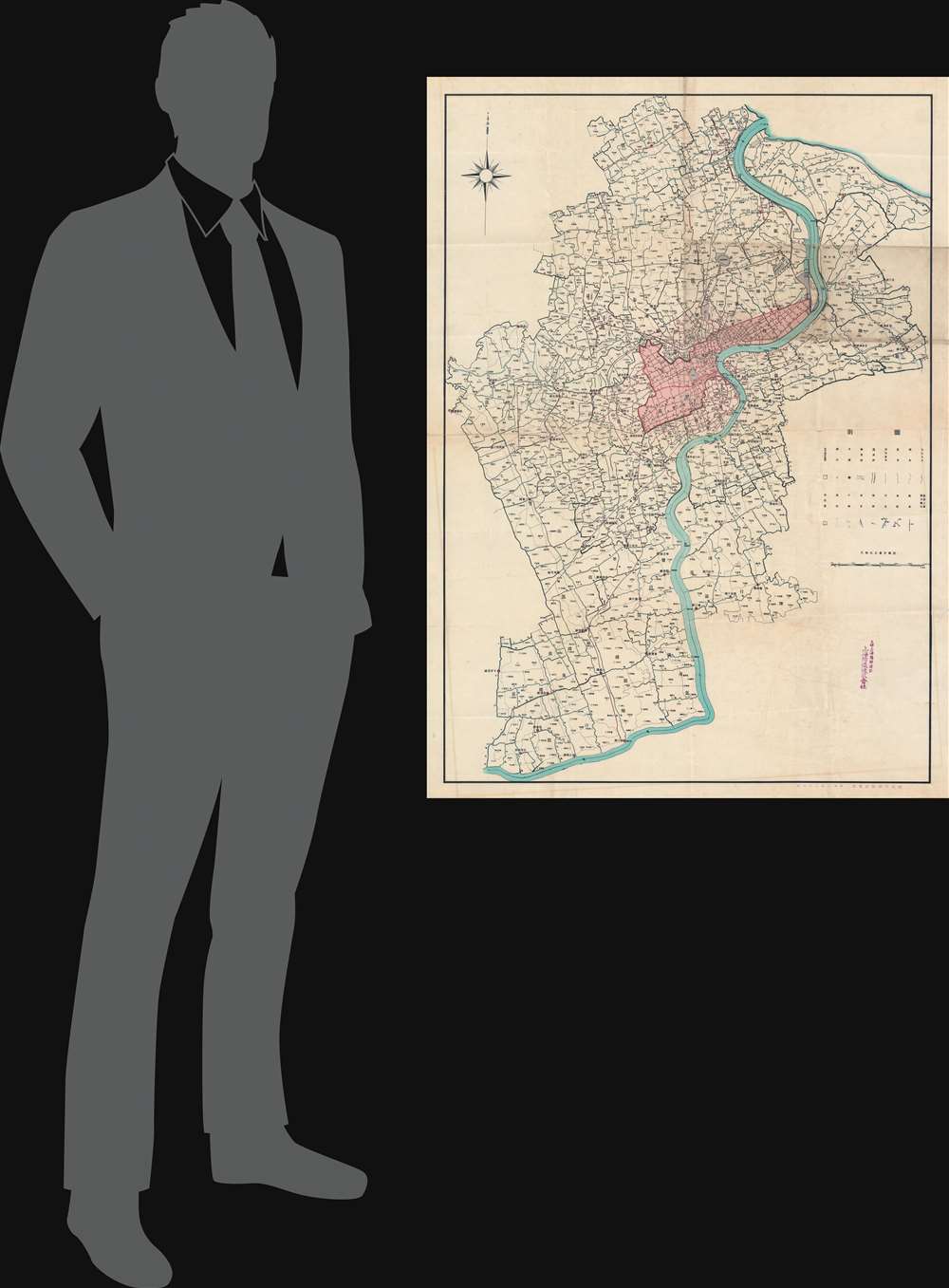 This is a scarce Showa 7, or 1932 map illustrating the vicinity of Shanghai shortly after the Shanghai Incident of 1932. The map was produced to illustrate the shanghai suburban region, and as such covers from the confluence of the Huangpu with the Yangtze to the sharp bend in the Huangpu near modern day Sheshang and Xixie. The Hunagpu River runs through the center of the map, with the International Settlement and French Concession areas highlighted in pink - essentially forming a demilitarized zone in the wake of the January 28th Japanese attack on Shanghai. The map seems to have been adapted with overprinting to add additional detail, including hachuring that identifies high-density population zones in the Chinese quarter south of the French Concession. Further coding identifies towns and villages of varying sizes. As well, the map beautiful illustrates the elaborate canal system surrounding Shanghai - which functioned as a de facto highway system for regional trade and commerce. There is a Chinese language stamp in the lower right for a Shanghai textile trade association.

The 1910s-20s were a golden age for Shanghai, at least in the Concessions. While China was ruled by Chiang Kai-shek (1887 - 1975), Shanghai was dominated by several consolidated foreign trade Concessions. Under the strict administrative control of the Concessions, the city became a cosmopolitan haven in the midst of political unrest and a center for global trade and finance. The Concessions occupied what is today central Shanghai's most desirable land, hugging the Huangpu River and Wusong River (Suzhou Creek). These extraterritorial European, Japanese, and American enclaves had modern housing, fine roads, streetcars, elegant shops, clubs, and more. It was a place of excess, art, and extravagance, where fortunes could be made by the enterprising - and lost by the foolish. Moreover, lacking the moral constrains that limited social life in Europe and America, Shanghai became nexus for the opium trade, sexual excess, gambling, and other vices. This ephemeral world come crashing down on January 28, 1932, when the 'Shanghai Incident' or 'January 28 Incident' pitted the Republic of China against the Empire of Japan. Responding to Chinese student protests against the Japanese occupation of Manchuria, the Japanese Navy bombarded Shanghai. Chiang Kai-shek sent the Chinese army in to defend the Shanghai students, threatening to escalate the conflict. The League of Nations, fearing all-out war, united to demand a ceasefire, which was signed. Nonetheless, most consider The January 28 incident to be the opening salvo of the Second Sino-Japanese War (1938 - 1945) which ultimately merged into World War II (1939 - 1945).

Printed in 1932 by the Japanese operated Fine Printing Company, Ltd. (精版印刷株式會社). This map is rare and we have identified no other examples. It does not appear in the Virtual Shanghai archive. Further research into the map is generally stymied by the fact that the map has no title. We do note a similar map covering the area northeast of Shanghai, in the Virtual Shanghai Archive, but nothing matching the scope or size of the present map.

Very good. Some wear on old fold lines. Toning corresponding to original fold metric.
Looking for a high-resolution scan of this?