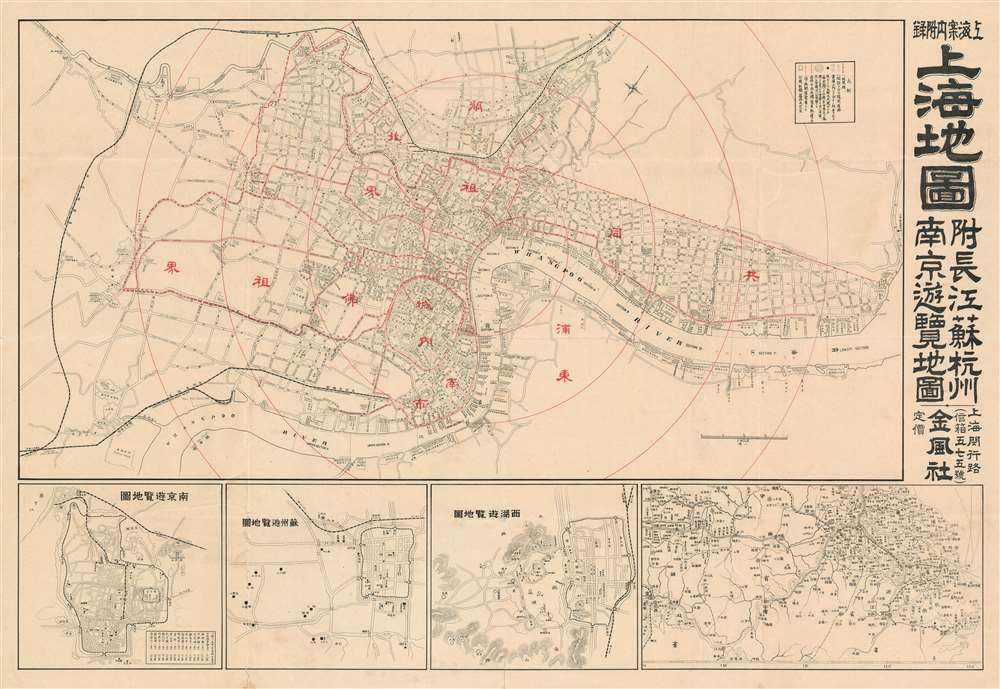 An extremely rare c. 1928 pre-war tourist map of Shanghai, China, issued in Shanghai by Jin Feng She (金鳳社). The map illustrates the core of Shanghai focused on the Foreign Concessions, the old Chinese Walled City, and the many business along the Hunagpu River. Ghosted dotted lines indicate streets under construction and are most commong in the International Settlement and in the periphery of the city. It extends westward to include the route of the Shanghai Hangchow Ningpo Railway. Electric tramways are highlighted with solid red lines. The dotted red lines illustrated the borders of the concessions. Fine dotted lines highlight railless electric trams.

We have found no evidence of this map or its publication. The Shanghai publishing house by Jin Feng She (金鳳社), was probably a Japanese-Chinese concern active during the pre-war period. It was located at (閔行路 575 号) Minhang Road, No. 575, in the Japanese part of the international Settlement. No other examples are known.

Chojiro Shimazu (島津長治郎, fl. c. 1900 - 1927) was a Japanese publisher based in Shanghai, China. Chojiro arrived in China around 1900, establishing himself in the pharmaceutical business. He began publishing in 1912, founding Jin Feng She (金鳳社) press. Under his leadership, the press published several Japanese language guidebooks, maps, directories, and more. Learn More...

Very good. Minor wear on original fold lines, especially at fold intersections.
Looking for a high-resolution scan of this?