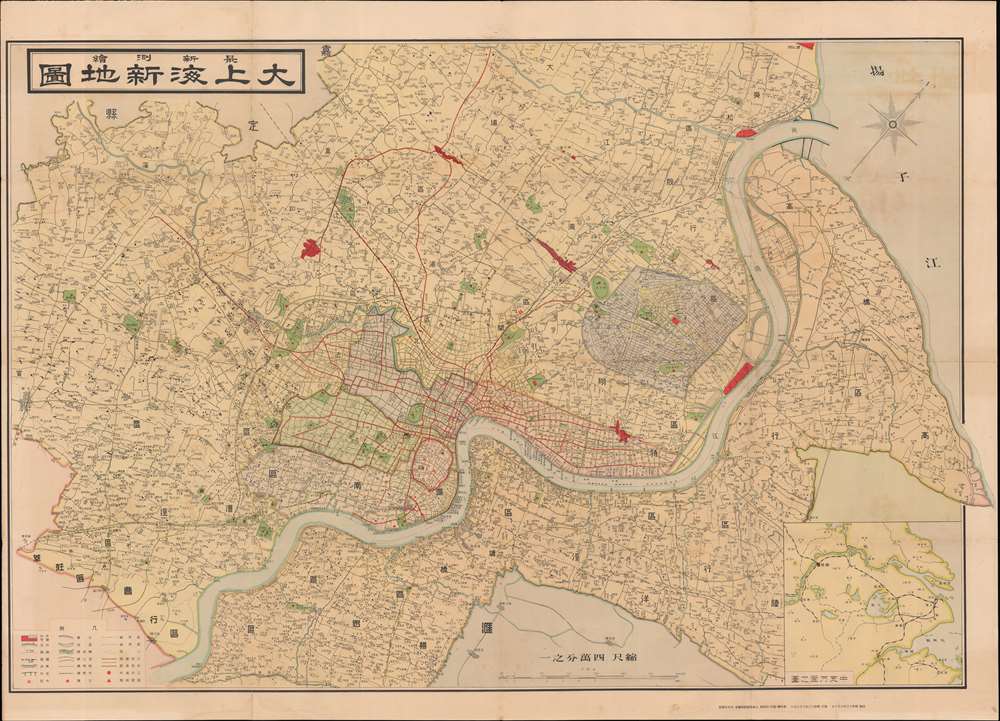 This is a very rare 1938 (Showa 13) Kimura Kesao plan of the Greater Shanghai Municipality, made soon after the Chinese municipality was occupied by Japanese forces in the Second Sino-Japanese War.

The map is oriented towards northwest. Different parts of the city are color-coded, with the French Concession as green, the western part of the International Settlement as purple, the eastern half of the International Settlement where many Japanese residents lived shaded red, and various districts of the Chinese municipality shaded different colors. Most notably, the new municipal center for Greater Shanghai (大上海), shaded purple, is prominent towards center-right. Part of the plan for reorganization of greater Shanghai was the restructuring and renaming of urban districts (for example, Nanshi or Nantao 南市 became Hunan 滬南區). However, these names were unfamiliar to residents and did not last into the postwar period. There is an inset map of the Lower Yangzi Delta Region (中支方面之圖) at bottom-right.

Despite the recent hostilities that devastated the Chinese sections of the city, the map does not indicate any information of a military nature or note the destruction of entire neighborhoods. Instead it focuses on geographic features, roads, railways, temples, administrative divisions, and parks. Overall, the map is richly detailed, especially along the Bund (the waterfront of the Huangpu River), along the waterfront of Hongkou (the part of the International Settlement with many Japanese residents), and in the outer neighborhoods and suburbs of the city, which are often not included in maps from this era.

The End of the Treaty Port Era

Although it was already a sizable port by 1842, Shanghai expanded at a tremendous pace when it was designated a treaty port after the First Opium War. British and French traders and missionaries were leased land outside of the walled 'Chinese City' (shaded in red, center towards bottom), particularly along the Bund. Due to the extraterritoriality clauses of the Treaty of Nanjing and subsequent 'unequal treaties,' over time the areas where Westerners resided effectively became exempt from Chinese jurisdiction. In 1862, the French split with the Americans and British, creating a distinct French Concession, causing the 'Anglos' to form the International Settlement (divided at Avenue Edward VII 愛多亞路, Yan'an Rd. today).

As a strategically located entrepot near the mouth of the Yangzi River, Shanghai quickly became a gateway to the entire Yangzi Delta. The light administration of the foreign concessions led to the city's reputation for economic dynamism, multiculturalism, crime, drugs, prostitution, and urban poverty.

The British influence was particularly strong in the International Settlement, but the city's elite was a cosmopolitan mix of Europeans, Americans, Japanese, Chinese, and others. Trading diasporas from across China and the globe set up shop there, including Baghdadi Jews, whose names (Kadoorie, Sassoon) were synonymous with Shanghai's high society. Since the exact sovereign status of the treaty ports was unclear, Shanghai became a refuge for stateless individuals and refugees, including White Russians and, later, Viennese Jews fleeing the Nazis.

In the year before this map was made, the Japanese influence had increased considerably, and the number of Japanese residents (including Koreans and Okinawans) increased to over 100,000 during the war.

After the purging of Communists, Chiang established a new national regime in Nanjing. In the decade that followed, despite weak authority, civil war, a Communist insurgency, and an incremental Japanese invasion of northern China, the Nanjing Government and the Guomindang were able build something like a modern, functioning bureaucratic state, particularly in the Lower Yangzi Delta around Nanjing and Shanghai.

One of the hallmarks of these centralization efforts was the reorganization of Shanghai and its surroundings into the 'Greater Shanghai' (大上海) municipality (officially the Shanghai Special Municipality 上海特別市), fit out with a sparkling new administrative center in Wusong (吳淞). Although Chiang's government could not administer the foreign concessions or tax their wealth, it did exert much greater control over the growing Chinese-administered sections of the city and used myriad methods, including violence and intimidation, to project their influence into the foreign concessions.

The Battle for Shanghai and Its Aftermath

Starting with the Japanese invasion of Manchuria (the 'Mukden Incident') in September 1931, Chinese and Japanese troops fought on-again, off-again battles in northern China for several years. One of these many skirmishes took place on July 7, 1937, at the 'Marco Polo Bridge' (Lugouwiao 盧溝橋), just to the southwest of Beijing. Chiang Kai-Shek was reluctant to throw his armies into a full-scale war against the better trained and equipped Japanese forces but was forced to bow to public pressure and launch the long-expected war. Chiang decided to dedicate the bulk of his forces to a battle for Shanghai, which raged in the closing months of 1937.

Chinese-administered parts of the city, particularly Zhabei and Wusong to the north and east of the International Settlement, saw extensive bombardment and house-to-house fighting. Even the foreign concessions were not spared, most notoriously in the 'Black Saturday' incident, when a Chinese aircraft attempting to bomb a Japanese battleship on the Huangpu released its payload early, right into the most heavily-populated part of the International Settlement, killing some 3,000 civilians including many foreigners.

Despite the valiant efforts of Chinese troops, Japanese forces had naval and air superiority and were able to receive sufficient resupply and reinforcements. They held their ground against Chinese attacks until a counter-attack was prepared, similar to the Soviet victory at Stalingrad six years later. Severely weakened by the fighting in Shanghai and with many units in disarray, Chiang arranged a hasty defense of Nanjing while planning for a retreat to Chongqing, deep in the Chinese interior, to prepare for a long-term war of attrition.

This map was printed on August 10, 1938 (Showa 13) and distributed on August 15. It was drawn, printed, and distributed by Kimura Kesao (木村今朝男), based in the Wusong district of Shanghai. It is held by the Nichibunken (International Research Center for Japanese Studies) and the National Museum of Ethnology in Japan. A map with the same title was published in Shanghai the year before, but it is a different plan, made by the Shanghai World Geographic Society (上海世界輿地學社) and distributed by the Shenxin Bookstore (申新書店).

Very good. Some minor watermarks and wear along the fold lines. Ink from the title has imprinted slightly on the verso from folding.