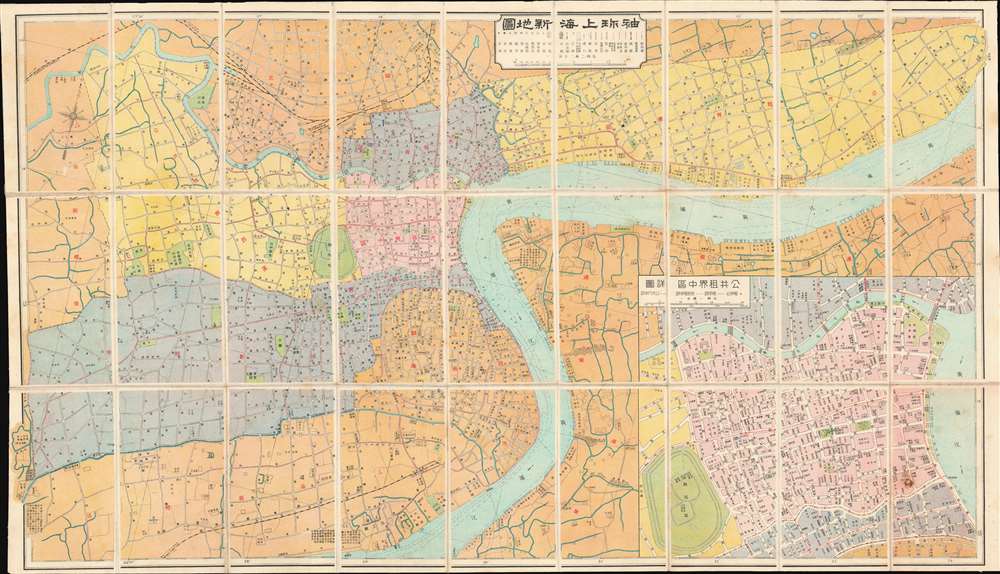 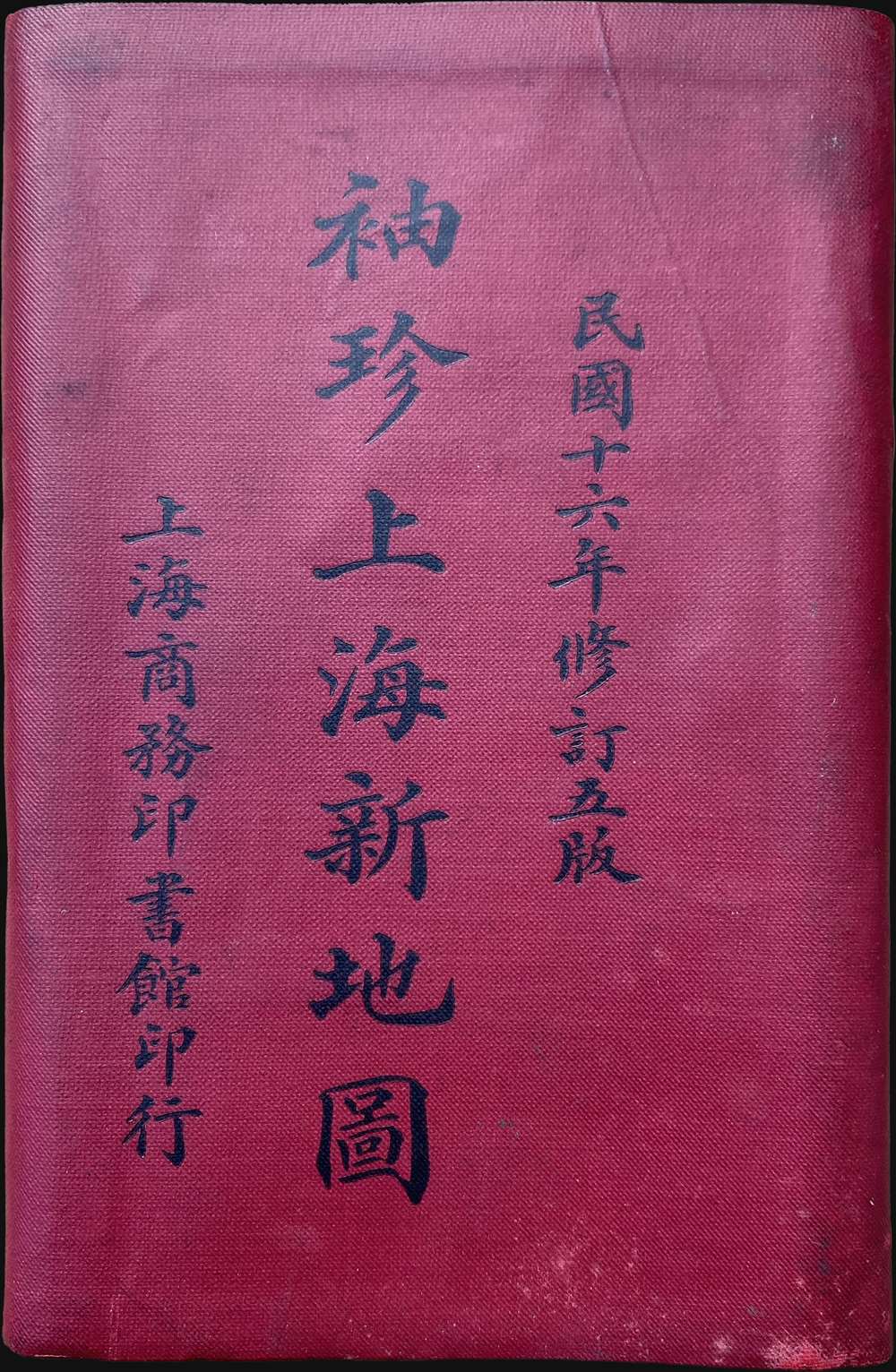 A rare and attractive 1927 map of Shanghai by the important Chinese cartographer Tong Shiheng (童世亨). The map is centered on the Shanghai Bund and fully illustrates the foreign concessions, including the British Concession (pink), French Concession (purple below British), American Concession areas (yellow), and the expanded British Concessions (yellow). In the lower right there is an inset map entitled, Shanghai Anglo-French Concession Map, detailing the central parts of the English and French concession areas on a scale of 1:10,000. The cartographer has highlighted three areas of special interest, annotating them with text blocks.

The second is the Shanghai Arsenal, also known as the Kiangnan or Jiangnan Arsenal. The Arsenal appears here with accompanying text block at bottom center. The Arsenal, which opened in 1865, was a major Qing center for China's Self-Strengthening Movement (1861 - 1895). In the late 19th century, it was the largest manufacturer of weaponry in Asia. The Qing hired foreign craftsmen to teach Chinese laborers gunsmithing, shipbuilding, and cannonry. In 1868, the first Chinese steamship was produced here. On a more peaceful note, the Qing contracted Englishman John Fryer to translate more than 160 foreign works of literature into Chinese. By the time this map was issued, weapons work at the arsenal had declined, but the shipbuilding department became independent in 1905 and was renamed, as here 'Shanghai Arsenal.' It remained active until the 1930s.

The Weather Signal Station appears here in the Pudong district, with is accompanying text, which roughly translates,

There are two signal stations. One is at Huangpu Beach, which reports the weather and time on a daily basis. It is called a weather signal station. The other is at Lujiazui. Signal station.

Huangpu Beach here refers to the Bund Meteorological station, established in 1884. When this map was issued, it was an affiliate of the French Concession.

The 1910s-20s were a golden age for Shanghai, at least in the Concessions. While China was ruled by Chiang Kai-shek, Shanghai was dominated by several consolidated foreign trade Concessions. Under the strict administrative control of the Concessions, the city became a cosmopolitan haven in the midst of political unrest and a center for global trade and finance. The Concessions occupied what is today central Shanghai's most desirable land, hugging the Huangpu River and Wusong River (Suzhou Creek). These extraterritorial European, Japanese, and American enclaves had modern housing, fine roads, streetcars, elegant shops, clubs, and more. It was a place of excess, art, and extravagance, where fortunes could be made by the enterprising - and lost by the foolish. Moreover, lacking the moral constraints that limited social life in Europe and America, Shanghai became nexus for the opium trade, sexual excess, gambling, and other vices. This ephemeral world came crashing down on January 28, 1932, when the 'Shanghai Incident' or 'January 28 Incident' pitted the Republic of China against the Empire of Japan. Responding to Chinese student protests against the Japanese occupation of Manchuria, the Japanese Navy bombarded Shanghai. Chiang Kai-shek sent the Chinese army in to defend the Shanghai students, threatening to escalate the conflict. The League of Nations, fearing all-out war, united to demand a ceasefire, which was signed. Nonetheless, most consider The January 28 incident to be the opening salvo of the Second Sino-Japanese War (1938 - 1945) which ultimately merged into World War II.

On April 6, 1849, Lin Kouei (麟桂), the Chinese governor of Shanghai, granted French Consul Charles de Montigny (1805 - 1868) a proclamation ceding extraterritoriality to France in order to establish a trading colony. The Concession initially occupied a narrow collar of land around the northern end of the Chinese City, south of the British settlement, an area of 66 hectares. It was subsequently expended several times. A further small strip of riverside land to the east of the Chinese City was added in 1861, to allow for the Quai de France, docks servicing shipping between China and France. Between 1899 and 1900 the French Concession further expanded, nearly doubling in size with new territory extending west of the original grant. It expanded again in 1914, reaching as far west as modern Huashan Lu (Avenue Haig). By the 1920s, the western part of the French Concession had become the most desirable residential area of Shanghai, popular both with foreign nationals and wealthy Chinese. The concession was mistakenly bombed during the chaotic 1937 Battle of Shanghai, fought between the National Revolutionary Army (NRA) of the Republic of China (ROC) and the Imperial Japanese Army (IJA). In 1943, the French Concession was handed over to the Japanese puppet Wang Jingwei Regime by Vichy France. The turnover was officially ratified after the war by the Sino-French Accord of February 1946, signed by the French Ambassador and Chiang Kai-shek. Today the French Concession, with its tree lined boulevards and French colonial architecture, remains Shanghai's most desirable neighborhood.

There were at least five editions. The first edition was issued on February 1, 1919. We do not know when the 2nd and 3rd were issued, but the fourth appeared on November 4, 1925. The present example is the 5th edition, January 1927. The map resembles the Latest Pocket Map of Shanghai published by the Zhonghua Book Company in 1927, likely the Zhonghua map copied this piece. Rare.

Tong Shiheng (童世亨; April 18, 1883 - March 20, 1975) was a Chinese self-made cartographer and publisher active in Shanghai in the early 20th century. He was born to a Chinese scholarly family in Jiading District, China, on March 12th, 9th year of Guangxu. He studied at Nanyang College before being sent to Japan to study cartography. Tong return to China in 1913, when he established the Sino-Foreign Map Bureau in Shanghai on Si Ma Road (Fuzhou Road). In 1915, Zhang Yuanji (Yüan-chi Chang; 張元濟; 1867 - 1959), an important Chinese reformer and general manager of the prominent Commercial Press, invited him to invest in the company. Tong invested 40,000 Silver Dollars and folded his map publishing operations into the larger Commercial Press, creating the Map Bureau. Under Tong Shiheng, the Commercial Press Map Bureau issued dozens of practical maps focusing on China, Shanghai, political events, the world, and more. Learn More...


Commercial Press (1897 – Present) (商务印书馆) is a publisher active in China from the late 19th century to present. It is considered to be China's first modern publisher, and was the largest publishing house in modern China, at the forefront of educational, scholarly, and literary development from 1900 to the 1950s. The Shanghai based press was founded in 1897 by Xia Ruifang who received venture capital from a Japanese firm. The firm immediately started amassing a collection of rare books which it republished using modern presses. It also introduced numerous periodicals ranging form the Eastern Miscellany (東方雜誌) to Youth Magazine (少年雜誌). It proved quite successful and, in 1914, Xia Ruifang attempted to buy out his Japanese investors. This resulted in his assassination shortly afterward. Nonetheless the press became a wholly Chinese organization under the reformer Zhang Yuanji (Yüan-chi Chang; 張元濟; 1867 - 1959), who succeeded Xia Ruifang in running the press. During World War II, during the January 28th Incident, the press and its collection of rare books was destroyed by Japanese bombers. Even so, by this time the press had expanded to multiple offices, including branches in Singapore, and was able to continue operating. During the Cultural Revolution (1966 - 1976), the Commercial Press was relocated to Beijing, and ceased all mapping operations. The press remains in operation today and has become a large international concern focused on the publication of Academic works. They now publish under the imprint Commercial Press International Limited. Learn More...

Very good. Folds into original binder. Original linen backing. Dissected and mounted.
Looking for a high-resolution scan of this?