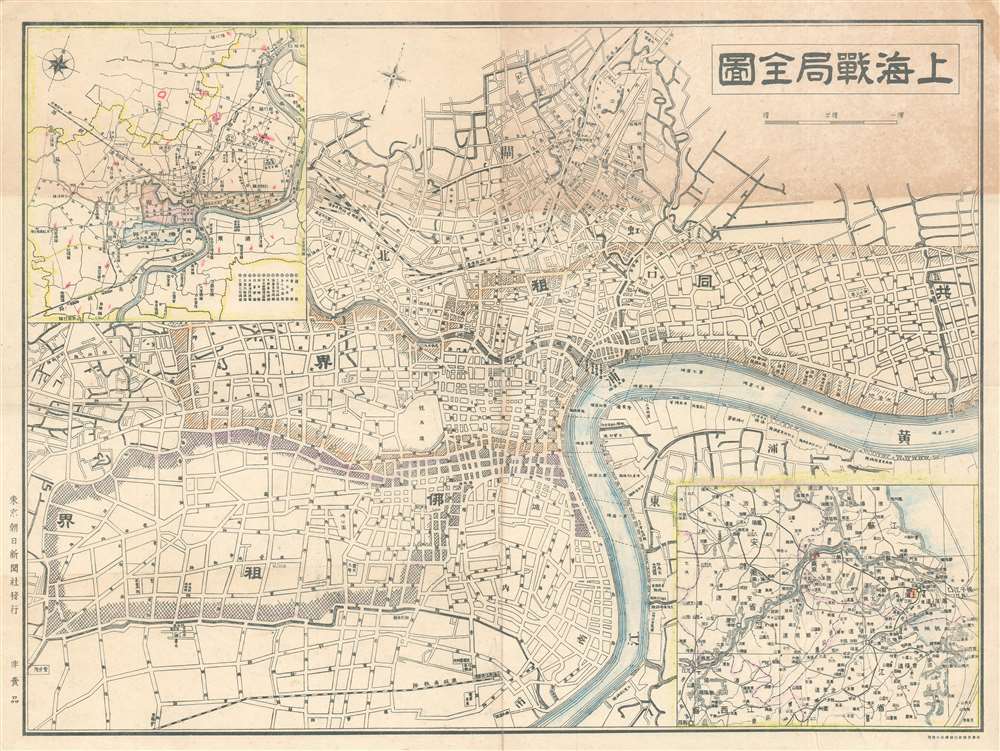 Map of Shanghai illustrating the situation in the city between the first and second phases of the Battle of Shanghai.
$600.00

A scarce pre-World War II map of Shanghai, China, issued by the Osaka Asahi Shimbun in 1937 or Showa 12, during the Battle of Shanghai (August 13, 1937). Centered on the riverfront Bund Distract, this map covers the heart of modern Shanghai including the International Settlement and French Concession. Larger scale regional maps appear in the upper left and lower right corners.

Chinese scholars point to this map as a 'War Map' illustrating the events associated with Pre-War Japanese aggression in Shanghai. The map illustrates the period between the first and second stage of the Japanese takeover of Shanghai. The first stage lasted from August 13 to August 22, 1937, during which the Republic of China National Revolutionary Army attempted to drive Japanese troop presence out of downtown Shanghai. The second stage lasted from August 23 to October 26, 1937, during which the Japanese launched amphibious landings on the Jiangsu coast and the two armies fought a Stalingrad-type house-to-house battle, with the Japanese attempting to gain control of the city and the surrounding regions. The third and final stage, ranging from October 27 to the end of November 1937, involved the retreat of the Chinese army in the face of Japanese flanking maneuvers, and the ensuing combat on the road to China's capital, Nanjing.

The War in General

The Second Sino-Japanese War was fought between the Republic of China and the Empire of Japan. Some disagreement exists with regard to when the war officially started, since two different so-called 'Incidents' can be used to mark the beginning of hostilities. Historically, July 7, 1937 has been used as the date when the war began, when Chinese and Japanese troops began exchanging fire at the Marco Polo (Lugou) Bridge constructed along a main access route to Beijing. This exchange of fire escalated to an all-out battle and led to Japanese forces capturing both Beijing and its port city of Tianjin. Other scholars, and since 2017 the Chinese government, trace the beginning of the Second Sino-Japanese War to the Mukden Incident and the Japanese invasion of Manchuria in September 1931. This 'incident' was based on Japanese charges that their rights in Manchuria, which had been guaranteed following the Russo-Japanese War, had been infringed, when, in all likelihood, the Japanese simply saw an opportunity to easily capture an essentially limitless supply of raw materials, a new market for their manufactured goods, and a chance to create a 'buffer zone' between Japanese occupied Korea and the Soviet Union. After five months of fighting, the Japanese created the puppet state of Manchukuo in 1932 and installed Puyi, the last Emperor of China, as its ruler. Even though there is some debate over when the war started, the result is essentially the same: years of war, famine, atrocities, and death followed. Following the Japanese attack on Pearl Harbor on December 7, 1941, the Second Sino-Japanese War is usually folded into the China-Burma-India Theater of World War II, which accounted for the majority of casualties during the Pacific War, numbering over 4 million Chinese and Japanese military personnel and between 10 and 25 million Chinese civilians. Although there is some debate on when the war began, consensus reigns supreme when it comes to the end of the war. Following the atomic bombings of Hiroshima and Nagasaki in August 1945, the Japanese unconditionally surrendered to the Allies, signed on September 2, 1945, bringing an end to the largest Asian war of the 20th century.

This map was published by the Japanese newspaper, Osaka Asahi Shimbun to illustrate the events of the Battle of Shanghai for the Japanese public. Although widely published at the time, the map has since become scarce on the market.